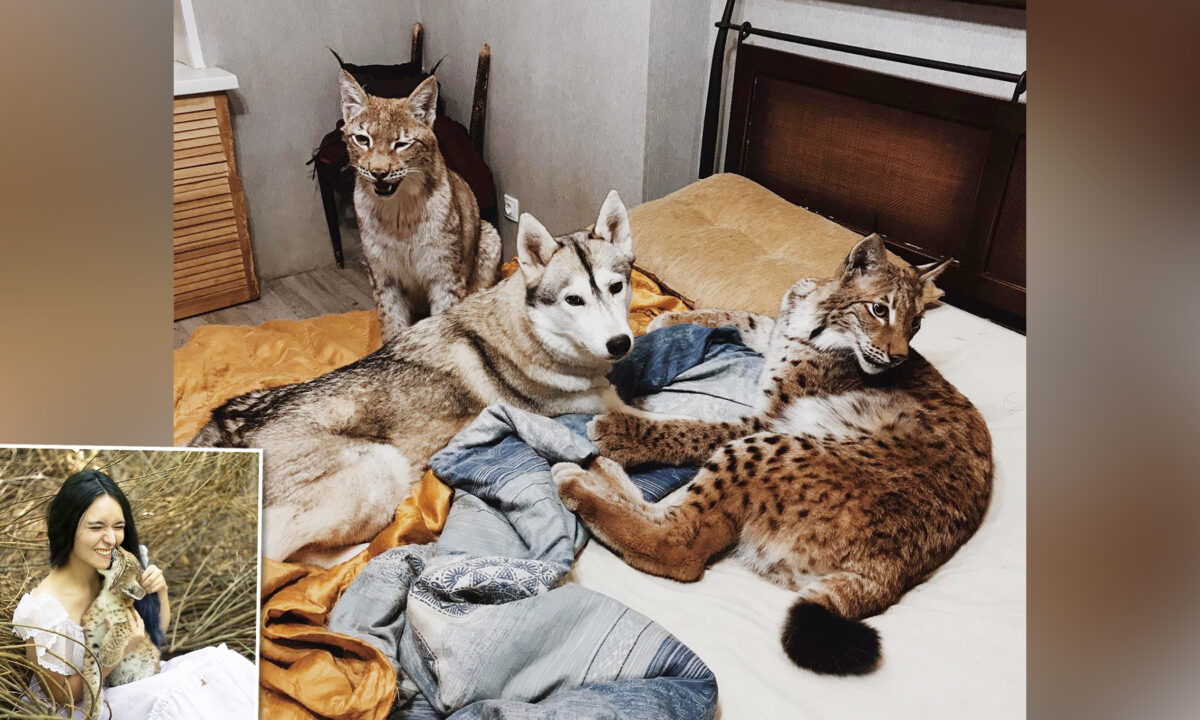 (Courtesy of Lynx and husky)
Animals

When a Russian animal lover learned that lynxes were still being bred for fur in her country, she rescued two of these cubs from a fur farm, raising them in her huge animal family of horses, foxes, and dogs. Today, the lynxes are healthy, tame, goofy, and very much part of the family.

Anastasia Poznyak was born and raised in Saint Petersburg, Russia, where she currently works as a scientific writer and translator. She cares for seven horses, two lynxes, two foxes, and 15 dogs.

After five dogs, the self-professed “cat person” despaired that there were no cats in her family.

“Almost all my huskies were abandoned by their first owners and had behavioral problems, so it wasn’t safe to take an ordinary domestic cat,” Anastasia told The Epoch Times. “That’s why I decided to adopt a bigger cat.”

Anastasia considered servals, caracals, and hybrid cat breeds, but none touched her heart. Then she learned that working fur farms were still operating in Russia, and that a farm called Saltykovsky Fur Farm was breeding lynxes for fur.

The horse stable owner then rescued a 17-day-old male lynx cub in 2018, naming him Geralt after the protagonist from the fantasy television series “The Witcher.” He was “tiny and cried all the way home,” said Anastasia. But by the next morning, it was clear that Geralt was unwell.

Anastasia rushed him to the hospital, where a vet diagnosed him with panleukopenia, a highly contagious viral disease that can be fatal. But Anastasia fought for Geralt’s life, and won. As he recovered, he developed a strong bond with another animal.

“When Geralt was a small kitten, my eldest dog, Banshee, became his stepmother,” said Anastasia. “She allowed him to sleep by her side, and she was also helping him with digestion by licking his belly. This was truly amazing.”

Geralt was raised and tamed by Anastasia and his animal companions. Over the years, Bulochka, a female lynx cub, Syr the dog, and Astrid the fox became Geralt’s favorites. Whilst Banshee eventually lost her mothering instinct, Geralt “still loves her and purrs to her” every time they meet.

Anastasia rescued Bulochka in 2019, but her story was more complicated. She had already been rescued from the fur farm as a tiny kitten, but her owners failed to tame her.

“After a few months, they found me on the web and asked whether I could adopt her,” said Anastasia. “I didn’t want another lynx, but I agreed. She was a wild, scared creature with a broken tooth and scratched face. Taming her was a real challenge!”

When Bulochka—meaning “sweet bun” in Russian—was welcomed into the family, she shocked her big brother Geralt with her wild behavior, but Bulochka recognized him as kin.

Anastasia said: “I can’t say he was teaching her anything, but she was definitely learning from him. The most important lesson was that humans are not enemies for the lynx, but friends and leaders.”

Today, whenever Anastasia takes Geralt for a walk on his leash, Bulochka will call to him from their enclosure.

Both the 35-kilogram (77-pound) cats cast an intimidating shadow. Standing on his hind legs, Geralt is as tall as his owner at 162 centimeters (approx. 5 foot 4 inches). However, the cats’ personalities differ from each other.

“Geralt is more sociable and credulous than Bulochka,” Anastasia said.

Moving with her lynxes and other large animals has been one of Anastasia’s most persistent challenges. Since 2019, she has been forced to move twice.

She explained: “We were living with dogs and lynxes in our own house in the countryside; then, after intimidation from the neighbors, we left our home, sold the cottage, and started to build a new house.

“We temporarily moved to a flat. However, the pandemic had started; we hadn’t finished the house, but received a lawsuit from the neighbors. Only in March 2021 did I get a chance to start my own horse stable.”

Anastasia won the lawsuit and her animals are safe, but getting them the specialized food and medication they need has since become a problem. She is considering moving to Europe.

“It’s not an ordinary case, and I have no idea how to survive this yet,” Anastasia said.

“Besides this, the real challenge is the young lynxes’ health. On the fur farm, the breeding program is not aimed at a long quality of life, so there were numerous issues we had to overcome, from infections and poor immunity to bone weakness.”

Anastasia is quick to deter others from rescuing lynxes without researching their medical, dietary, and behavioral needs. According to her, a lynx is not for everyone, and a failure to tame can be “a disaster.” But Anastasia’s own tamed, healthy lynxes have a happy home for life.

“I am often faced with the opinion that my animals should be released into the wild,” she told The Epoch Times. “However, that’s an illusion. Animals who were bred in captivity for generations are not equipped for wildlife; they do not have the behavioral patterns needed for survival.”

Their only chance for a good life, she insisted, is in the care of responsible people.

Anastasia shares updates on life with Geralt, Bulochka, and the rest of the 24-strong animal family on Instagram.