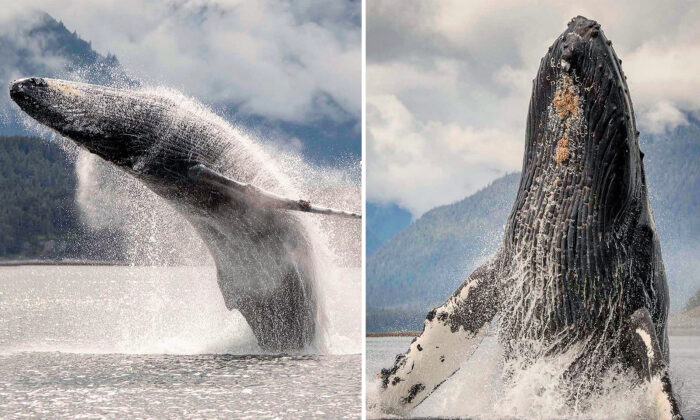 One Pennsylvania woman decided to leave behind her corporate job in marketing to fulfill her dream of taking breathtaking photographs as a profession to inspire the world.

That life choice is what led photographer Mary Parkhill, based in Pittsburgh, to travel to Alaska where, while out on the water fishing for halibut and salmon, she spotted humpback whales surfacing. She was enchanted and set out to capture their sublime beauty on camera.

“I started noticing humpback whales coming up for air and found myself gazing at them until they showed their flukes and dived to the depths of the ocean,” she shared on her website. “These gentle giants grabbed my heart and ever since, I have been hooked trying to photograph them in an effort to tell their story.”

Achieving that goal, she realized, would take patience and fortitude, for whales breach quite unpredictably and follow no schedule, other than their own natural rhythms. At first, she would see them surfacing and blowing steam into the air, and knew not what to expect. But eventually, Mary discovered a pattern: When the whales sense some “abnormal” activity above water, she said, they slap their fins or crash their flukes on the surface—a sign of an impending breach.

These are some of the shots of humpbacks breaching that Mary labored to produce on her trip, which she posted on her photography website Mary’s Mark:

Nor was it a simple task to simply expect to be able to capture that action on camera. The “relentless seas” of southeastern Alaska seemed “to take aggressive slaps” at her boat, making it a challenge to snap the marine mammals at the crucial moment. And as rules prohibit boats from approaching closer than 200 yards, a high-powered lens is crucial for snapping close-ups.

“It’s hard to have the discipline to be laser-focused and ready to photograph a breaching whale after you have been observing them for several hours,” she wrote. “Oftentimes, whales will breach without warning and they only breach one time.

“In addition to using a 150-600 mm lens, I also add a Sigma teleconverter, which helps give me the reach that I need,” she wrote, adding that she’s “still experimenting with equipment.”

Mary offered one last suggestion: “Make sure you have great rain gear!”