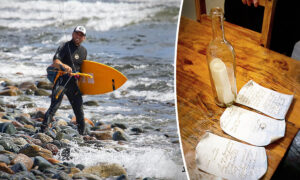 Kite-Surfer Finds Message in a Bottle With Diamond Ring Inside, Tracks Down Its Owner
0
Share Now
TelegramFacebookTweetEmailTellMeWeReddit
Copy Link 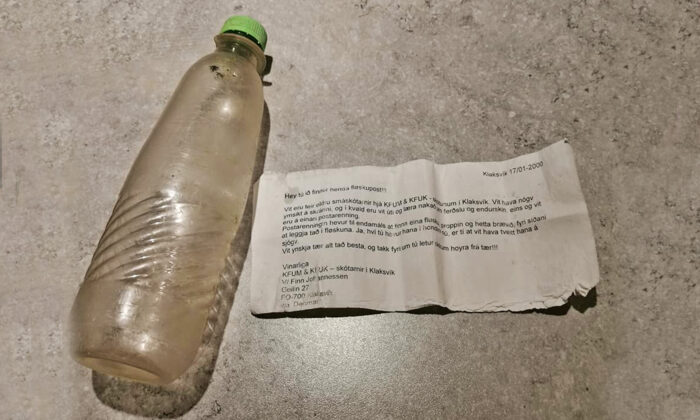 While walking on the beach, a woman from the Shetland Islands in Scotland discovered a bottle with a note from 21 years ago. The message was written in the Faroese language.

Megan Keppie was on a walk with her friend, Lisa, on Feb. 28, when she stumbled upon the plastic bottle with a green cap.

“I never look for messages in bottles—whenever I see bottles on beaches, I  just feel sad that there is so much rubbish about,” Megan told The Epoch Times via Facebook Messenger. “A minute before I found the bottle [Lisa] said ‘wouldn’t it be funny if we found a message in a bottle,’ then she actually stepped over it because she got distracted by the buoy on the beach.”

The Lerwick resident lingered to examine the bottle when she realized there was, indeed, something inside.

“I looked down and saw it but thought it would just be a receipt or something,” she said. “But when I picked it up I could make out it was foreign and that it had an address on it!”

The paper inside the bottle had a note written in Faroese and was dated Jan. 17, 2000. Unable to read what was written, Megan turned to Facebook for assistance.

“I found a message in a bottle which appears to have been sent [from] Klaksvik, Faroe on 17/01/2000!” she wrote, sharing a picture of the bottle and note. “Does anyone know anyone who speaks Faroese?”

Not long after, someone answered and translated the message of the note.

“Hello you that finds this message in a bottle,” translated Petur Højgaard, a Facebook user from Denmark. “We are the older young scouts at KFUM & KFUK scouts in Klaksvik. We have many things planned and tonight we are outside learning about traffic and reflection clothing …”

The translation revealed that the scouts had released a message into the ocean in the hopes that someone would find it one day.

“We wish you all the best,” the note read, “and thank you if you contact us.”

Alongside the address at the bottom of the letter, the name of the scout’s leader, Finn Johannesen, was also given.

“That’s epic!” wrote one user.“Amazing!” commented another. “Keep us updated if you hear back from them.”

Megan told The Epoch Times that Finn did, indeed, get in touch with her.

After word got around that someone had found a message in a bottle sent by a group of scouts from Faroe at the turn of the century, Finn reached out to Megan, curious to find out whether it was the message he thought it was.

“He contacted me after people messaged him to ask if he was the person mentioned in the news article from Shetland News,” Megan explained.

Megan said that Finn informed her that his scouts had sent out the message for fun, but none of them had truly expected it to be found, especially because so much time had passed.

“He said he was very shocked that it had been found, especially 21 years later!” she said.“It is interesting that when it was sent social media didn’t really exist, but now that it has been found I was able to communicate with him within 24 hours of finding it!”

It is certainly an incredible turn of events for Finn and the scouts that their note has finally been discovered.