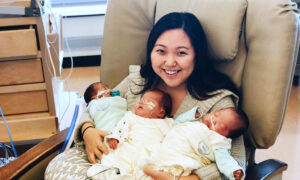 Triplet Mom Learns It Really Takes a Village to Raise a Child: 'You're Not Alone!'
0
Share Now
TelegramFacebookTweetEmailTellMeWeReddit
Copy Link 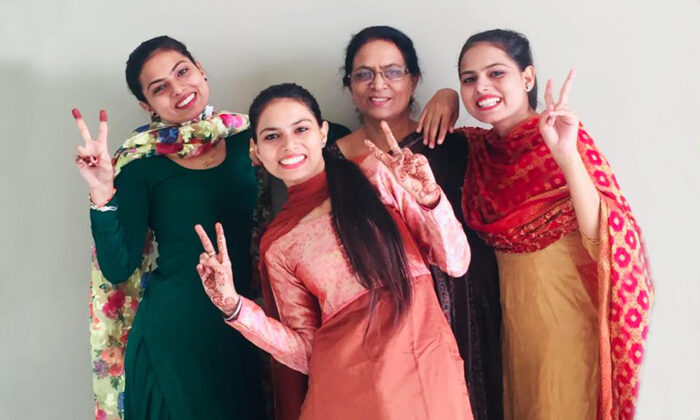 Despite the lack of support from her husband, the derision of her community, and the advice of her doctor to abort, an Indian woman chose life, bravely raising triplet daughters by herself.

“My daughters are my strength,” Auxiliary nurse-midwife Jasbeer Kaur, who currently resides in Rajasthan’s Ganganagar district in northern India, told The Epoch Times. “I have no regrets, no burden on my heart. If I would have committed the sin [of abortion], I would have died just with the guilt.”

Jasbeer got married in 1995, and it quickly transpired that her husband was an abusive alcoholic. A few months after the nuptials, Jasbeer became pregnant. Standing at 5-foot-2-inches tall, Jasbeer, then 26 years old, knew something was different about her pregnancy when she had grown extremely large within just the first three months. She thus decided to get an ultrasound done.

“My sister was with me. My husband did not support me at all,” she recalled. Jasbeer was told she was pregnant with three girls, in a practice of disclosing the sex of unborn babies to their parents which has since become illegal. On hearing the news, she was shocked, as she hadn’t known anyone, back then, who had given birth to triplets.

At home, Jasbeer gleaned support from her mother, yet the words of her doctor were ringing in her ears: she should have an immediate abortion, to save her future finances, and also her marriage.

“The doctor herself was a lady, and it surprised me that her thoughts were such,” said Jasbeer. “I was very angry in my heart. I thought this was such a huge sin … She said, ‘It would just feel like a normal delivery, you will not have any problems.'”

Contemplating the next step, Jasbeer reasoned that “these were innocent little souls, who were not even born, who had not even seen the world, so how could we just discard them in the garbage?”

“When I used to work in the hospital, I used to watch how some people would abort their babies,” Jasbeer said. “How fully-formed babies would just come out and drop into the bucket.”

During that period of time, a female child was also undesirable in Jasbeer’s community. No girl had been born in her husband’s side of the family for the last three generations, and he was not prepared to support triplet daughters, nor his wife, if she refused to abort, thus asking her to leave.

However, Jasbeer was clear that she wouldn’t be able to live a peaceful life if she made the decision to abort.

Thus the determined expectant mother left her house with the support of her faith and family.

Strangers, she said, would stare with derision at her growing frame. Yet her mother, brother, and sister-in-law reassured her that they would manage. Jasbeer suspects that God gave her courage of conviction.

Jasbeer said she asked God to make sure her daughters were born healthy. “That is all I wanted,” she recalled.

Beautiful babies Sandeep, Mandeep, and Pardeep were born on Dec. 3, 1996, in Punjab, a state in the northern part of India. Jasbeer took two daughters with her while she worked in Rajasthan to support her family. Meanwhile, the third child remained with Jasbeer’s mother in Amritsar, Punjab, joining them later when Jasbeer could cope.

Life was hard, and the challenges were many.

“I had to continue with my nursing job and had to look after my home,” Jasbeer said. “My pay scale was very low. I had to educate my daughters, and I had no other support for educating my children in good, reputed schools.”

Yet, relentless hard work and a mother’s love worked wonders for Jasbeer’s growing girls, who share a striking resemblance. Today, they are 24 years old and thriving.

Sandeep is a makeup artist; Pardeep, after completing a hotel management qualification, works in a hotel. Following the footsteps of her mother, Mandeep works in the nursing field with an NGO called FRHS India and lives with her mother.

Jasbeer says that her daughters’ successes speak for themselves. Her community, she said, even speculates that the girls may not have fared so well if they were born in another home.

“All the credit goes to my lion-hearted mother, who never imposed any restrictions on us,” Sandeep told The Better India. “She aced both the roles of a mother and father. She never, for once, let us feel that something was missing.”

After a decades-long career, Jasbeer is due to retire, but the immense respect she has earned as a midwife, woman, and mother will follow her into her next phase of life.

“People respect them,” she said of her daughters while speaking to The Epoch Times, “and today, I am also so respected because of them. I feel, because of them, I am alive.

“Don’t kill your daughters, love them, educate them, raise them. Give them your love and receive their love back. They bring sunshine into your homes.”