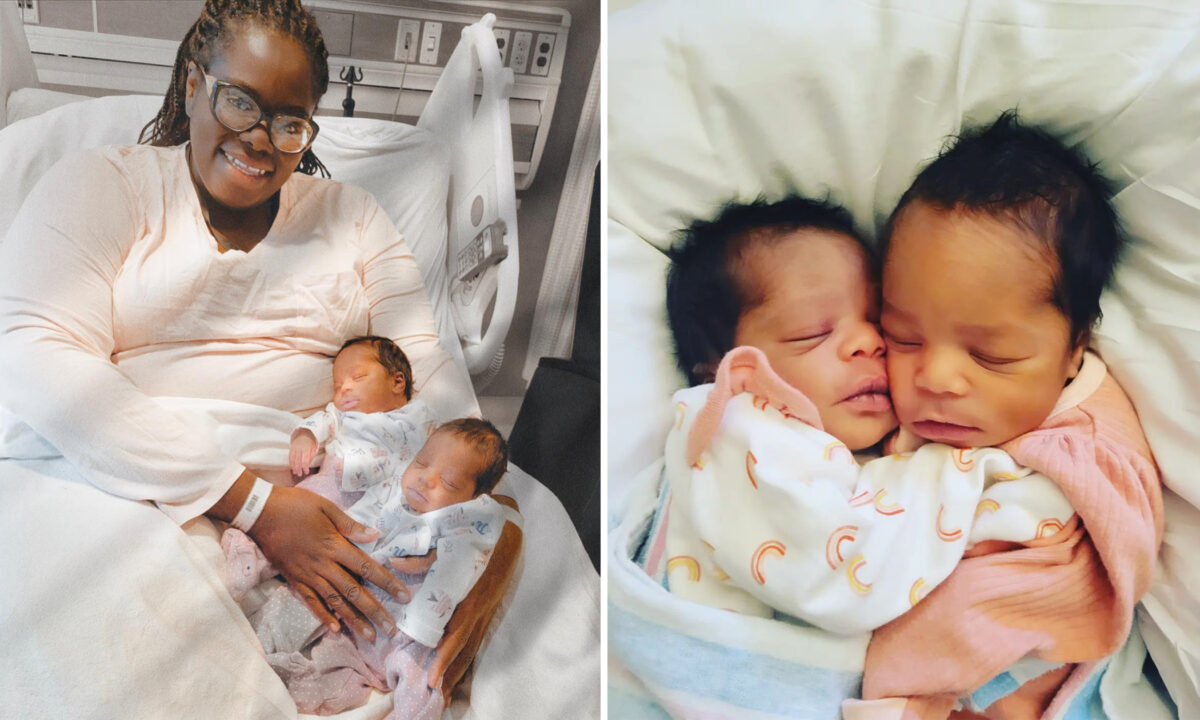 A New York-based beautician has become a mom of 10 after welcoming her third set of naturally conceived twins in a row. Doctors claim the odds of this happening are as rare as 1 in 200,000.

Kimberly Alarcon, 37, who lives with her husband, John, 43, and their family in Wallkill, New York, admits she was scared when she learned a third set of twins were on their way.

“I was worried about everything people may say, where are we going to fit them, can we afford more kids?” Kimberly told The Epoch Times. “Everything was running through my mind, but my husband is the level-headed one; the first thing he said was, ‘Let’s pray,’ and he told me that everything would be okay. They are blessings.”

John and Kimberly, who originally hail from Mount Vernon, share 10 children: Brittney, 17; Sarah, 13; Hunter, 10; Zoey and Zachary, 6; Olivia and Oliver, 4; and newborns Kenzy and Kenzley. They also have custody of their nephew, 3-year-old King.

Sisters Kenzy and Kenzley came into the world via Caesarean section at Westchester Medical Center on April 25, 2022. Kenzy, weighing 4 pounds 15 ounces (2.2 kg), was born 3 minutes ahead of her sister Kenzley, who weighed 5 pounds 9 ounces (2.5 kg).

Sharing more about their personality, Kimberly said: “Kenzy is more laid-back and chill, while Kenzley is very demanding and nosey. She’s a little over a week old and already up and looking everywhere.”

In a birth announcement shared on Instagram, Kimberly revealed that there had originally been three babies, but sadly, a boy, Kent, was lost to miscarriage. “God gives us what he knows we can handle, so yes, we will love him and remember him,” she wrote.

Kimberly is not new to a big family, as she herself grew up with nine biological and eight adopted brothers and sisters, Today reported. Her husband had only one sibling and always longed for a large family, and thus the Alarcon children are more than a dream come true for their parents.

Westchester Medical Center’s chief of maternal-fetal medicine, Dr. Angela Silber, told the outlet that conceiving three sets of twins back to back, without medication or intervention, is “pretty incredible.”

Kimberly told The Epoch Times that her journey through three consecutive twin pregnancies was “hard but the reward at the end is outstanding.” Consumed by the chaos of everyday life, she never knew how rare it was until her story made headlines.

Public response to the birth of her and John’s third set of twins has been both positive and negative, she conceded.

A normal day in the life of this hands-on mom is always hectic. Were it to be calm, she explained, it would only mean that something is wrong.

Her 10-year-old, Hunter, rises at 5 a.m. and makes his own breakfast. His siblings wake an hour later and the school rush begins; Kimberly sees her older kids onto the school bus, before spending the bulk of the day with her “three little ones.”

Once the eldest children return from school, Kimberly helps with homework.

“I always ask them how was their day, and always tell them I love them. We bake and cook together and everyone is fed, bathed, and ready for bed by 8 p.m.,” said Kimberly, who takes the reins at home since John—who’s a detective, employed for the past 20 years at the Mount Vernon Police Department—works long hours.

Kimberly says having a system in place is great, but sometimes things don’t go as they’re planned.

As a mom raising and caring for such a big family, Kimberly said the key question she always gets asked is, “How do you do it,” and the funniest question asked is, “Do you guys have cable TV?”

There are always challenges, whether big or small, but her motto, she said, is simple: “Pray, and give it to God.”

Being a mother is “not always peaches and cream” for the 37-year-old, who suffers from depression and anxiety and gets overwhelmed, but Kimberly and her family choose to ignore the negative and be nourished by the positive, which adds to her strength, she said.