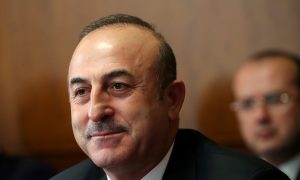 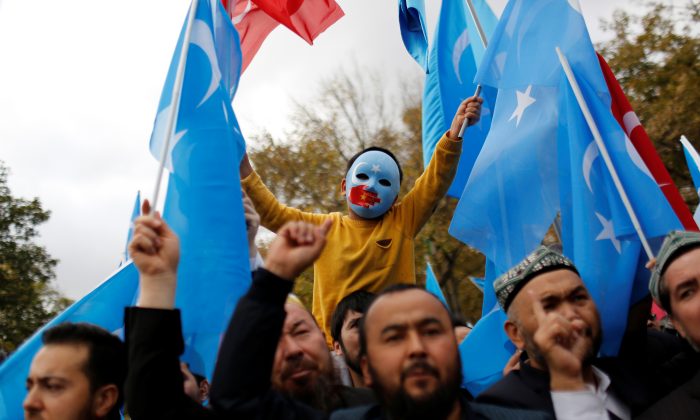 A masked Uyghur boy takes part in a protest against China, at the courtyard of Fatih Mosque, a common meeting place for pro-Islamist demonstrators in Istanbul, Turkey on Nov. 6, 2018. (Murad Sezer/Reuters)
China Human Rights

Without Papers, Uyghurs Fear for Their Future in Turkey

ISTANBUL—Without work or residency permits in Turkey and unable to renew their Chinese passports, Qurbanjan Nourmuhammed and his family live in uncertainty in Istanbul, cut off from their son who returned to Xinjiang three years ago.

Nourmuhammed, his wife and five children came to Turkey in 2015, facing increased pressure from China to abandon Islamic practices such as wearing a headscarf, growing a beard and closing their restaurant for the Muslim holy month of Ramadan.

China has faced growing international criticism for setting up facilities that United Nations experts describe as detention centers holding more than one million Uyghurs and other Muslims. Beijing says it needs the measures to stem the threat of Islamist militancy, and calls them vocational training centers.

Ismail Cengiz, founding secretary general of the Istanbul-based East Turkestan National Center, said that some 35,000 Uighurs live in Turkey, which has been a safe haven for them since the 1960s.

Turkey is the only Muslim country that has regularly expressed concern about the situation in Xinjiang, due to its close cultural links with the Uyghurs who speak a Turkic language.

While Uyghurs had no problems in Turkey until three or four years ago, Ankara’s security concerns and stronger ties with Beijing reversed that trend, said Seyit Tumturk, president of a rights organization called the National Assembly of East Turkestan, the name that Uyghur exiles use for Xinjiang.

Nourmuhammed has not heard from his son Pakzat since he went back to Xinjiang in 2016 to visit his grandparents. A friend of Pakzat’s told Nourmuhammed that Pakzat was detained upon arrival at the airport in Urumchi. He believes the government accuses him of having links with extreme Islamists.

The Xinjiang government did not respond to a request for comment.

The family regularly attends protests around Turkey in the hopes of having their voices heard.

“When my son was arrested, he was only a 16-year-old kid. His younger siblings ask us constantly when they’ll be united with their older brother,” Pakzat’s mother Gulgine Mahmut said.

“I don’t believe he was involved in a crime, I think he was falsely accused.”

Nourmuhammed is unemployed as he waits for a residency permit he applied for in 2017 to be approved. Gulgine and their four children have been issued with permits, which risks tearing the family apart if Nourmuhammed is deported.

Nourmuhammed said his family lost touch with relatives in Xinjiang, who asked not to be contacted due to fears that the government will associate them with jihadists.

Uyghurs also cannot renew their Chinese passports at the local embassy when they expire and they are only given a document that will allow them to return to China, said Munevver Ozuygur, President of the East Turkestan Nuzugum Culture and Family Foundation.

Some 15 Uyghurs who spoke to Reuters said they expect Turkey to pay more attention to their plight and give them the permits to allow them to work and benefit from the healthcare system.

After a gunman, believed to be an Uzbek national, killed 39 people in a popular Istanbul nightclub on New Year’s Day 2017, Turkey took a more careful approach to people from central Asia, tightening the vetting process for new arrivals, Tumturk said.

“Not all of the people whose passports have been labeled as risky… are problematic people,” he said. “People who can’t retrieve a required document from China can experience the same issue.”

Cengiz said many Uyghurs had begun to fear they may be sent back to China. “Turkey was seen as the only country that could stand up to China. In the past year, they have been fearing for their existence in Turkey,” he said.

However, some hope has returned after Turkey took a harder stance against China at a U.N. Human Rights Council meeting last month, where Foreign Minister Mevlut Cavusoglu criticized Beijing for the alleged mistreatment of Uyghurs and called for authorities to protect the freedom of religion.

“There is a positive development in the favor of East Turkestan,” Ozuygur said. “Turkey started to give China the message that it is aware of the oppressions that Uyghurs experience in a proper way with a diplomatic attitude.”