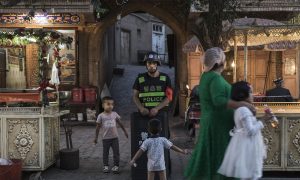 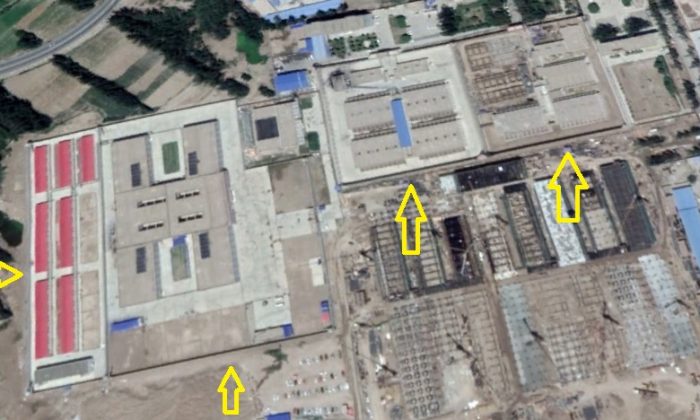 Mapping a Human Rights Horror: Calculating the Detentions in Xinjiang

The world believes a human-rights catastrophe is taking place in Xinjiang Province in western China, with large numbers of Uyghurs and other Muslims being herded into prisons and re-education camps.

But how does one document the scale of the detentions that are happening there?

Through arduous searching and researching of Google Earth satellite images, a Chinese dissident was able to locate 19 possible prisons and 15 possible re-education camps in Kashgar Prefecture (officially known as Kashi Prefecture), in Xinjiang, with a total possible capacity of a half-million people.

Li Fang, who is living in exile in Finland, spent about a month to painstakingly conduct a “blanket search,” and “comb” through Google Earth images of Kashgar, looking to verify, or find evidence for, the allegation that more than a million people could be held in the re-education camps and prisons in Xinjiang, in a massive crackdown launched by the Chinese Communist Party (CCP).

So, Li concluded, studying that area might give the outside world an important window into the situation of all of Xinjiang.

Using the data history function of Google Earth, Li initially found that several prisons in Shule County and Kargilik (or Yecheng) County had been significantly expanded since 2017.

Then, he decided to “comb” through all the counties in Kashgar, and found as many as 19 prisons. If the sub-prisons belonging to two major facilities were also counted, there are as many as 27.

While searching and studying the prisons, Li also found some abnormalities with some buildings, communities or schools. For example, there are many wire nets or fences inside or outside of those places.

Through careful study, Li concluded that these should be the re-education camps. He found about 20 such facilities in Kashgar and figured that 15 of them are possible camps.

The criteria Li used to locate prisons are:

• There are thick, straight, and enclosing walls outside the area;

• Watchtowers higher than the enclosing walls can be found at two or four corners of the enclosed area;

• Usually, very obvious “patrol roads” can be seen inside and outside the enclosing walls.

• The buildings inside the enclosing walls are very evenly laid out and are at a distance from the walls. Usually, there are no vehicles inside the walls.

With these criteria, Li was not only able to locate 19 prisons, but also see the process of expansion of some of the prisons with the help of Google Earth’s data history.

And Google Earth images indicate that the facility is still being expanded.

The criteria Li used to locate re-education camps are:

• There are enclosing walls and barbed wire around the area;

• There are partition walls, or barbed wire, or iron fences inside the camps, which divide the building group into several discrete areas;

• There are watch-box-like facilities in the areas;

• The areas are very “quiet,” with no vehicles or very few vehicles inside;

•  The above characteristics generally appeared simultaneously after 2017.

Using these criteria, Li was able to locate 15 possible re-education camps in Kashgar.

A satellite image from February 2016 shows that the area looks like a school, which covered an area of about 8.66 acres, with an estimated building capacity of 3.01 acres.

Throughout the data history, an expansion can be seen, starting in August 2016. In July 2017, some blue-roofed buildings were added, and the density was quite high. In November 2017, expansion in the peripheral area began, and many houses around the site were demolished.

The expansion was completed in September. At that point, the total area was about 12.21 acres, with a building capacity of 12.91 acres.

Li said the sudden large-scale expansion happened after current CCP Xinjiang Secretary Chen Quanguo—the official considered to be responsible for the suddenly intensified repression of the Uyghurs—took office there in August 2016.

The buildings inside the area are of very high density. There are not only enclosing walls outside the camp, but many partitioning walls inside. Many watch-box-like facilities can also be seen inside. So Li concluded that the site could be a re-education camp.

Li believes that cement production figures corroborate the buildup of prisons and re-education camps in Xinjiang.

According to China’s National Bureau of Statistics, cement production in China in 2017 declined 0.2 percent from 2016. However, cement production in Xinjiang increased by around 13 percent in the same year, which was the highest growth rate among all 31 provinces and cities under the direct control of the central government.

While the year-on-year monthly cement production in December 2017 for all of China fell 2.2 percent, Xinjiang’s output jumped about 65 percent, which also was highest among all of the 31 provinces and cities, and much higher than the area with the second-highest growth, which was Liaoning Province at almost 17 percent.

Since Xi Jinping took power in 2012, steel production in Xinjiang had been falling, except for 2016, when it experienced a slight uptick. However, in 2017, Xinjiang’s steel output jumped almost 28 percent, with December’s growth at about 43 percent.

Li says the sudden increase in cement and steel production correlates with the large-scale expansion or construction of prisons and re-education camps in Xinjiang.

By adding up the total building capacity for the prisons and re-education camps, Li came to the following conclusions:

• The total estimated building capacity in the 15 possible re-education camps is 269 acres. And, except for one camp, they all appeared after October 2016, two months after Chen took office in Xinjiang.

• Prisons hidden inside farms, and without tall, enclosing walls or watchtowers can’t be located with the above criteria. Therefore, the actual number of prisons may be much higher.

• Re-education camps hidden inside large closed buildings, such as large markets, skirt buildings, underground facilities, or bomb shelters, can’t be located with the above criteria. Therefore, the actual number of re-education camps might be much higher.

• The total building capacity of the 19 possible prisons and 15 possible re-education camps is 620 acres. According to Hong Kong’s standard, the average living space for each prisoner is 4.66 square meters, or about 50 square feet. China’s standard is unknown. However, using an average area of five square meters, or approximately 54 square feet, by rough calculation, the 620 acres of buildings can hold a half-million people.

• If a half-million people are being imprisoned in Kashgar, that means 12 percent of the entire population in that area is in prisons or re-education camps. If 12 percent of the population of Xinjiang is in prisons or re-education camps, that would equate to 1.36 million people who are in detention, or significantly more than the United Nations’ estimate in October that a million Uyghurs are being detained.

A table with information about the prisons in Kashgar Prefecture, Xinjiang Province, identified by Li Fang. (Li Fang):