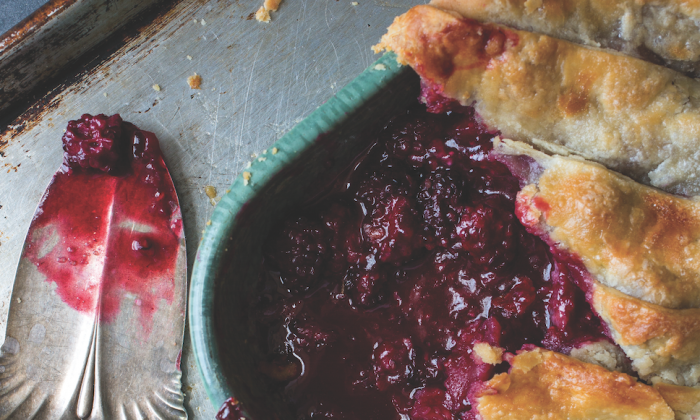 Kate McDermott's berry pies are a celebration of summer, best made with love and shared with loved ones, as all pies should be. (Andrew Scrivani)
Food & Dining

With Hands and Heart: The Joys of Making, Sharing, and Learning Life Lessons From Pie

Kate McDermott, pie maker, teacher, and lover, remembers very clearly the most important pie she ever made in her life.

She grew up in a multigenerational home, with her grandmother—affectionately known as “Geeg,” in her stubborn refusal to accept any label indicating elderliness—a seasoned home cook and baker who grew up on an Iowa farm. She had a knack for pie making; McDermott learned the craft at her side.

One day, she suffered a small stroke.

“Nothing was making sense to her,” McDermott recalled. “And for some reason, I said, ‘Geeg, can you make a pie?’ And she just looked at me and said, ‘Well yes!’ Just kind of like that, like an Iowa farm girl would’ve done.”

McDermott assembled the ingredients and equipment, and her grandmother got to work, deft hands mixing, pressing, rolling in the familiar rhythms etched deep into her mind through years of baking.

And then she stopped. She couldn’t go on. Tears in her eyes, she turned to McDermott and handed her the rolling pin.

“To me, it was a really important moment. It felt like she was passing this on to me,” McDermott said. She helped her grandmother finish her last pie.

Since then, McDermott has baked thousands more. In the fall, they might be apple pies, packed with six to eight different varieties; in spring, sweet strawberry and mouth-puckering rhubarb get their turn.

And now, in glorious summer, come pies bursting with gooseberries or blackberries, the “quintessential taste of a Northwest summer” (McDermott lives in Washington), or peaches so ripe and juicy their sweet nectar drips down the chin at first bite (she gushes over the ones at Frog Hollow Farm in Brentwood, Calif.).

But when asked about her most memorable creations over the years, she lists not fillings or recipes, but stories. She tells of memories of people: her grandmother, her students, her son.

So it goes for most foods: their power persists most in the shared moments they create and become tied to.

For McDermott, pie, “made with hands and hearts,” is especially powerful. “I can’t imagine any other food that symbolizes as much happiness and love,” she writes in her book, “Art of the Pie.”

That’s why she continues to bake—nearly everyday. Her pies are sent along what she calls her “network,” to gracious neighbors and her local bookstore and the veterinarian for her beloved dog, Greta-Pie, to people in times of celebration or in times of sadness and need. Tins and plates come back empty of pie but full of love and gratitude.

It’s why she continues to pass on the craft, too—to over 3,000 people, in her Art of the Pie Workshops and Pie Camps at her home, lovingly dubbed the Pie Cottage, and on the road.

The love trickles down through her students: a gentleman who for his 60th birthday resolved to make and give away a pie every week; mothers who took her class pregnant and years later send pictures of baking with their now 6-, 7-, or 8-year old children—the next generation.

“[Pie making] has been around for a long time; these crafts are time-honored. I feel like I’m in a line of pie makers that stand behind me,” McDermott said. “Each person that I am teaching, that’s the next person in line. They will teach someone else and that’s how they keep the craft going.”

Learning, and Learning From, the Craft

As a proud baker myself, but one who’s never delved into the world of pie making (I don’t count muffin-tin tartlets made with grocery store crust), I decide it’s about time to join the line.

I head to a recreational baking class at the Institute of Culinary Education (ICE), in New York’s Financial District, led by seasoned chef-instructor and proud Virginia farm girl Melanie Underwood. She’s been making pies with her grandmother since she was 4. We’re in good hands.

Underwood starts the class with a rapid-fire overview of recipes and techniques, peppered with tips and tricks, do’s and don’ts. Do keep your ingredients and dough cold; don’t overwork it. Add enough water, or else the dough will crack, but not too much, or it won’t be as flaky. (A tablespoon of vodka or vinegar helps the flakiness.) Chill the dough for four to five hours before baking, or it’ll shrink in the oven. (Try making it the day before.) Again, don’t overwork the dough, or it’ll shrink in the oven, too.

I gulp. But Underwood reassures us.

“You’re going to make a mistake, and it’s not a big deal,” she says. “If you make a mistake, can you fix it?” That’s her underlying philosophy for baking: be flexible, roll with the punches, and if all else fails, add sugar and an egg to your failed pie crust and turn it into sugar cookies. It doubles as a sweet life philosophy, too.

“People put a lot of pressure on themselves,” she later tells me. There’s pressure to make the picture-perfect pie—perhaps reinforced by social media expectations—but it doesn’t have to be. It’s more important to have fun.

“Just remember at the end of the day, it’s just a pie, and unless it’s burnt, it’s going to taste great,” she says.

Back in the kitchen, we pair up and head into the fray.

Stand mixers help us form our doughs, but we use human eyes and hands to judge when they’re ready. Gingerly pressed into disks (don’t overwork it!) they go into the fridge to chill.

In the meantime, fillings: cherry and strawberry rhubarb for me, cooked down slightly so they don’t shrink in the oven and leave that dreaded gap under the top crust.

I start to roll out my dough, and it cracks and crumbles under the pressure. I shrug (while internally trying to quell my perfectionist panic), patch or pinch it together, and press on.

It’s a workout, but pleasantly therapeutic. Roll, rotate, repeat. After another quick stint in the fridge, the rolled-out crusts are pressed into pie tins, edges fluted—with a pinching motion that instantly reminds me of sealing dumplings, evoking family memories and bringing a smile to my face—and filled. A lattice top on one, a brown sugar streusel on the other. Into the oven they go. Exhale. That wasn’t so hard.

I wait impatiently, trying to sneak peeks through the oven doors. Finally, Underwood deems the pies ready, not with a timer, but with intuition honed over the years, and takes them out, one by one.

Around the room, I see what McDermott calls “pie love” at first sight. “They look like they’re looking at a newborn baby,” she said. “‘I made this, look at what I made!’”

And so too I gaze, adoring, at mine. My strawberry rhubarb pie has sunken in, and some edges of my cherry pie teeter on burnt. But they’re beautiful, perfectly imperfect. Jammy fillings bubble with residual heat, emanating a syrupy-sweet fragrance, and the lattice top shines golden and glossy, beckoning with whispery flakes. I made this!

We each ooh and ahh at our own, and then at each other’s. They’re all sweet memories waiting to be made. My baking partner will feed hers to lucky work colleagues in the morning; two other students giggle about their soon-to-be very happy husbands waiting at home.

As for me, I take mine home to six sweet-toothed housemates. Pictures I send on the subway ride are met with heart-eyed emojis and dramatic GIFs, and though most of them have succumbed to sleep by the time I arrive, in the morning, slices have already disappeared by the time I’m out of bed.

I proudly send pictures to family and friends on the other side of the country, too.

“Like a professional!” my mom replies. I swell with pride.

“So you’re making me one when you visit, right?” my best friend asks. I promise that I will.

Pie is a wonderful teacher.

“It’s helped me find my way, even when it has seemed that everything was falling apart,” McDermott writes in her book. “Being able to patch together dough gave me the confidence to put my own life back together when it had broken apart.”

She summarizes some of her life lessons learned in her three “Rules of Pie Making and Life:”

Sign up for Kate McDermott’s Art of the Pie Workshops and Pie Camps at ArtOfThePie.com, and ICE’s recreational cooking and baking classes at Recreational.ICE.edu.