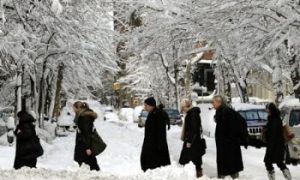 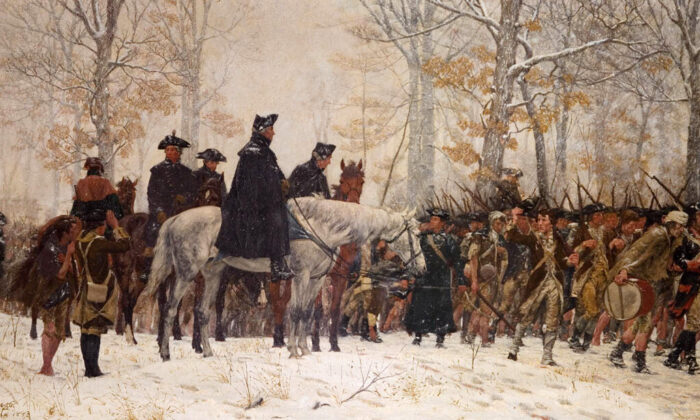 As I write these words, the date is Feb. 2, 2021, and I am visiting my daughter in Elmhurst Township, Pennsylvania. The ground is covered by approximately 15 inches of snow, with no end in sight. Though born in this state, I was reared in the South, and though I’ve seen big snows, especially when living in the Smoky Mountains, like most Southerners I am awestruck by a boatload of snow.

Several times, dressed in three layers of shirts, a hoodie, and a North Face coat, trousers, and shoes and warm socks, I’ve stepped to the covered porch on the side of the house to look at this ongoing bombardment. It’s cold and windy, but I’m dressed warmly enough and can enjoy the beauty of the day: the gray tree trunks standing in contrast to the falling snow, the pathway and road to the nearby school erased by the accumulated flakes, the majesty of nature mantling firs, cars, and nearby houses with wreaths of whipped cream.

We’re out in the country, and as I look across the broad lawn buried in snow, I find myself thinking of a place 120 miles east of us and a time almost 250 years in the past.

In December of 1777, Philadelphia, seat of the Continental Congress, had fallen into the hands of the British. George Washington removed his defeated men to the rolling countryside about 20 miles from the city, using the terrain of that place to keep an eye on his enemy. According to History.com, Washington’s troops arrived at Valley Forge exhausted, hungry, and dispirited by several defeats.

Yet these soldiers displayed tenacity and resolution even in these dire circumstances.

“Within days of arriving at Valley Forge, troops constructed 1,500 to 2,000 log huts in parallel lines that would house 12,000 soldiers and 400 women and children throughout the winter. Washington directed that each hut measure approximately 14 feet by 16 feet. Sometimes the soldiers’ families joined them in the space as well. Soldiers were instructed to search the countryside for straw to use as bedding, since there were not enough blankets for everyone.”

The privations of these soldiers would continue throughout most of that winter. Hunger, disease, and cold weather were their comrades; one soldier in six died in that place. The National Park Service notes that many of these deaths occurred in the spring, indicating the deceased had likely contracted diseases like typhus, influenza, and dysentery.

Albigence Waldo, an army surgeon from Connecticut, kept a journal, often bitter and sarcastic in tone, of the early days of Washington’s forces at Valley Forge. On Dec. 14, he recorded these observations:

“The Army has been surprisingly healthy hitherto, now begins to grow sickly from the continued fatigues they have suffered this Campaign. Yet they still show a spirit of Alacrity and Contentment not to be expected from so young Troops. I am Sick—discontented— and out of humour. Poor food—hard lodging—Cold Weather—fatigue—Nasty Cloaths—nasty Cookery—Vomit half my time—smoak’d out my senses—the Devil’s in’t—I can’t Endure it—Why are we sent here to starve and Freeze—What sweet Felicities have I left at home; A charming Wife—pretty Children—Good Beds— good food—good Cookery—all aggreable—all harmonious. Here all Confusion—smoke and Cold—hunger and filthyness—A pox on my bad luck. There comes a bowl of beef soup—full of burnt leaves and dirt, sickish enough to make a Hector spue—away with it Boys—I’ll live like the Chameleon upon Air.”

On the same day, Waldo wrote of a comrade coming to him for medical attention:

“There comes a Soldier, his bare feet are seen thro’ his worn out Shoes, his legs nearly naked from the tatter’d remains of an only pair of stockings, his Breeches not sufficient to cover his nakedness, his Shirt hanging in Strings, his hair dishevell’d, his face meagre; his whole appearance pictures a person forsaken and discouraged. He comes, and crys with an air of wretchedness and despair, I am Sick, my feet lame, my legs are sore, my body cover’d with this tormenting Itch—my Cloaths are worn out, my Constitution is broken, my former Activity is exhausted by fatigue, hunger and Cold, I fail fast I shall soon be no more! and all the reward I shall get will be—“Poor Will is dead.”

With such privation occurring early in the winter, it surely seemed impossible that this rag-tag band could hold out until the spring, much less face the British army. Yet out of that forlorn host came troops ready to challenge the soldiers of George III.

Von Steuben drilled the troops incessantly, teaching them how to load their weapons fast and efficiently, how to reform ranks and rapidly change direction, and how to deliver a bayonet charge at the enemy. In addition, he wrote a drill manual that was distributed throughout the army and remained standard for the military for years. With these drills and instructions, the baron transformed a band of amateurs into an army of professionals.

The Americans were also negligent about camp hygiene. By having the men dig latrines on a downhill slope running away from the camp, von Steuben undoubtedly saved lives at Valley Forge.

So trained in the arts of war, and led into battle by von Steuben, the Americans that next summer would meet the British troops on the field of battle as worthy opponents in tactics and techniques.

Without Baron von Steuben, the American army might have continued its streak of losing battles.

But the man who deserves the lion’s share of the credit for preserving the army and the cause of liberty is George Washington.

With some in the government calling for his removal for incompetency, with his troops suffering from illness and the cold weather, and with the British only about a day’s march away, Washington worked heroically for the American cause. He wrote letter after letter to the Continental Congress, begging for supplies of food and clothing. Though he quartered in a farmhouse, he remained with his men throughout that winter, promising them that he would “share in the hardship” and “partake of every inconvenience” of their tribulation. Washington held that rag-tag army together through every reverse and hardship, and aided by the French, they finally defeated the British at Yorktown, Virginia.

Henry “Light Horse Harry” Lee, one of Washington’s officers and later the father of Robert E. Lee, eulogized Washington with this famous line: “First in war, first in peace, and first in the hearts of his countrymen.”

He was a leader who commanded by example and by personal virtue.

Then and Now: Some Takeaways

Many of today’s elites fail these tests of leadership. During our pandemic, members of Congress, some of our governors and mayors, and our bureaucrats have continued receiving paychecks while shutting down small businesses, leaving many of those establishments permanently closed. They may claim “to feel our pain,” but that response is unworthy of them. Some of them break their own edicts, eating at restaurants with a crowd of friends, traveling, getting haircuts, and taking off their masks when they believe no one is watching.

Unlike George Washington, most of these officials do not “partake of every inconvenience” along with the rest of us.

And unlike the Prussian, we forget that each and every one of us can make a difference in the world. We may not shake up the course of history like von Steuben did, but the mother overseeing her children’s education, the man I know who plays the stock market and then generously gives his friends money, all those who every morning get out of bed and cheerfully perform their duties—they grease the wheels of our society and keep it functioning.

Finally, though none of us welcomes pain and sorrow, suffering can act as a forge for us, as it did for the men at Valley Forge, hardening our resolve, giving us strength, and building our character. As we struggle right now through this winter of pandemic, hard economic times, and political uncertainty and upheaval, we might do well to call Washington’s soldiers to mind as well as other great Americans and look to them as examples of courage and determination.

During the American Revolution, Thomas Paine wrote that “the summer soldier and the sunshine patriot” would fail to do their duty and thus fail their country. The patriots at Valley Forge were winter soldiers and patriots, men who continued the fight and who gave their descendants a free country.

We should strive to be the same.

A final note: Though we now celebrate Presidents’ Day instead of George Washington’s birthday, we might pause on February 22 and remember the first president of the United States, his sacrifices, and what he meant for our country.