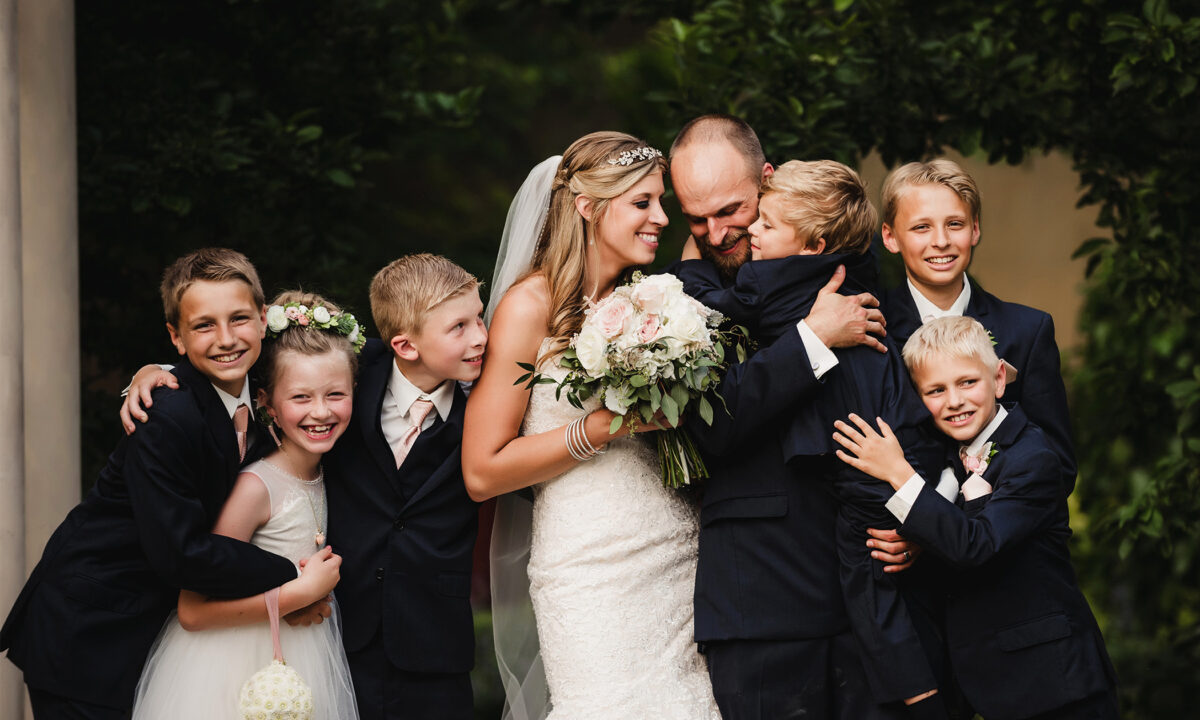 Widow and Widower Fall in Love After Tragic Loss of Their Spouses, Become Blended Family of 8

A second chance at a happily-ever-after came for a widow and widower from Wisconsin when they met after both having lost their spouses in sudden, tragic circumstances.

Steve Ullmer, 42, and his second wife, Erin, 40, have now been married for four years. Together, they parent six children: four from Steve’s first marriage, and two from Erin’s. Their blended family is a testament to their faith-filled journey.

Steve met his first wife, Wendy, at Menasha High School in Wisconsin where he was a senior and she was a junior.

He told The Epoch Times: “We had a class together … We started to date right at the end of my high school career, but just for a few months … I went off to school at the University of Wisconsin; she stayed to finish high school.”

Later, Wendy, went to a school to become a nurse.

For the next five years, the couple managed to have a long-distance relationship. During this time, Steve was seduced by the college party lifestyle and was involved with drugs and drinking.

“That was not something Wendy was into,” he said. “It damaged relationships, affected my school, and I started to actually get some physical injuries from my drinking. I had to have surgery, and by the grace of God it could have been much worse.”

Despite all this, Wendy never gave up on her love and was by Steve’s side.

“I don’t understand to this day why she stayed with me but she did,” Steve said. “She was just a very loving, honest person.”

But Steve knew that something had to change in his life and he began to seek out a path. He started reading the Bible and found pure truth between the pages.

“I was 22 years old, in my last year of college. I was very hungover and was all by myself in my car in the middle of the night,” Steve recalled. “I felt the presence of God strongly, physically, in a way that I could not explain. It changed me, and from that day forward I surrendered my life to Jesus.

During their 13-year marriage, the couple had four sons: Liam, now 16, Jack, 15, Silas, 12, and Judah, 8. Steve had various jobs in the copper mill where he is now a production manager. Wendy worked as a part-time nurse so that she could stay home with the kids. She used her skills to help her friends stay healthy, and when she and Steve decided their family was complete, they began writing a book together.

Losing the Love of His Life

“I remember the last date I went on with her just talking about the future,” Steve said. “Five days after that last date, she was gone.”

On March 16, 2017, Wendy began experiencing heart palpitations. She wasn’t worried, as she’d had them before. But Steve took her to the doctor, where she was fitted with a heart monitor.

It was a normal night and Steve went to sleep an hour earlier than Wendy.

However, an hour later, Steve woke up to hear his wife gasping for breath beside him.

“I tried to wake her up, and she would not respond to me at all,” he said. “I started to shake her and yell her name, and she was totally unresponsive … I called 911, I performed CPR on her, the paramedics came, the sheriff came, they all came to my house and tried to revive her, administered a shock to her heart … and they couldn’t revive her.”

At the hospital, doctors managed to restart Wendy’s heart and placed her on a ventilator, but her blood pressure deteriorated. The cardiac surgeon advised against another resuscitation, but Steve insisted; he believed God could still heal his wife.

The entire family prayed for a miracle, but Wendy passed away the very next day.

Steve didn’t know how to tell his children that their mother, who was only 36, had died. At that time, they weren’t sure of Wendy’s cause of death. It wasn’t until a few months later that he found out Wendy had died from sarcoidosis, an abnormal collection of inflammatory cells, in multiple organs throughout her body.

Nobody had known Wendy was sick. Luckily, their children tested negative for the disease, and Steve leaned on family and the church for support as they tried to cope with the grief.

“All of a sudden being a single dad, trying to raise four young boys, it was so challenging,” he said, “but I’m thankful that God gave me the kids that I have, especially during that time, because they kept driving me forward.”

Steve dragged his boys’ mattresses into one bedroom so that they could all sleep together and ask some tough questions to each other, such as “Where is mom now?” and “How did God let this happen?”

During this time, there was an outpouring of support from the community, as people prepared meals for the family, gave the children haircuts, and sent cards and messages stating that they were praying for him and his family.

In late June 2017, Steve received a message through Facebook from Erin Stoffel, a woman well-known in his Wisconsin hometown for suffering an immense tragedy of her own. Erin had lost her husband and eldest daughter in a shooting incident in 2015.

Erin’s message to Steve was simple: “Hey, Steve, you don’t know me, but I’m praying for you and your boys. Just keep trusting in Jesus.”

Just like Steve, Erin had met her husband, Jon, in high school. They attended Bible College in California together and married young. The couple welcomed their first daughter, Olivia, when Erin was only 19. Later, a son and second daughter followed: Ezra, now 15, and Selah, 12.

On May 3, 2015, Erin and Jon took advantage of a pleasant day and took their three kids on a walk across Menasha’s 1,600-foot Trestle Trail Bridge.

“At the halfway point of the bridge, there’s a red pavilion with some benches,” Steve said. “People like to fish, or just sit, because you’re out in the middle of the lake on this bridge. They saw there was a man who was slumped over on a bench, and another man standing next to him.

“Jon wanted to go see what had happened … the man still standing pulled out a gun, shot Jon, shot Erin, and shot Olivia. They all fell to the ground.”

Erin had been shot through the leg but grabbed Selah, who was beside her, and started running, later sustaining two additional gunshots to the hand and stomach. She pleaded to her son, Ezra, to run before she collapsed.

The shooter had killed the slumped-over man, named Adam, Jon, and Olivia, and took his own life by shooting himself.

‘May God Forgive You’

Erin was transported to the hospital and had to undergo immediate surgery to stop the bleeding.

When she woke up after the surgery, she had tubes in her mouth.

“She couldn’t talk, and the only way she could communicate with everyone was to write on a piece of paper,” Steve said. “She asked about Jon and Olivia. The family had to confirm that both of them were gone.

“One thing that struck me from this story is that Erin had heard her husband’s last words to the shooter. He had said, ‘May God forgive you.’ Erin wrote that on a piece of paper … she shared that with everyone.”

When Steve received Erin’s comforting message after losing Wendy, he was moved by her selflessness. He asked a lot of questions about how to cope after such a loss. Erin sent him songs and Bible verses, and eventually, the pair grew close.

Steve said: “She is one of the most unique people I’ve ever met. She’s very, very loving, very outgoing, and had very strong faith; that’s one of the things that drew me to her. She reached out to me during a time when I was going through some very difficult things. I’m just very thankful for her.”

The pair met in person for the first time in July 2017, at the Christian music festival, Life Fest. They spent hours walking and talking, sharing their lives.

As their friendship developed, Steve felt that Erin was just trying to help him, but Erin confided that Steve had helped her heal, too.

They found their kids could support each other in a similar way. “They don’t have other friends or kids their age who have been through something like this. Suddenly, now they have each other,” Steve said.

When Erin felt ready, Steve accompanied her back to the Trestle Trail Bridge to make peace with her loss.

“It was very hard, but we felt like we could do things like that with each other,” he said. “Both of us believe it was God that brought us together.”

Before long, the couple felt “God was calling” them to form a relationship. They turned to friends to seek advice about blending families before getting engaged in April 2018. They got married two months later.

Describing their wedding day, Steve said: “It was beautiful. I just feel so blessed to have all of these families around us, supporting us, and they were all there. It was a really unique experience.

“When I got married to Wendy in 2004, that was for life. I viewed that as a Christian, and she was the same way, so I would never have thought I’d get married again. But that’s not the story God has … He works for the good of those who love Him.”

Together, Steve and Erin want to share their stories to bring glory to God, comfort those in grief, and encourage others that hope can be found.

“My faith, having that peace, it can sustain you through anything that this life throws your way,” Steve said. “It’s hard to understand till it happens, but there’s no peace to be found on that level in anything else.”