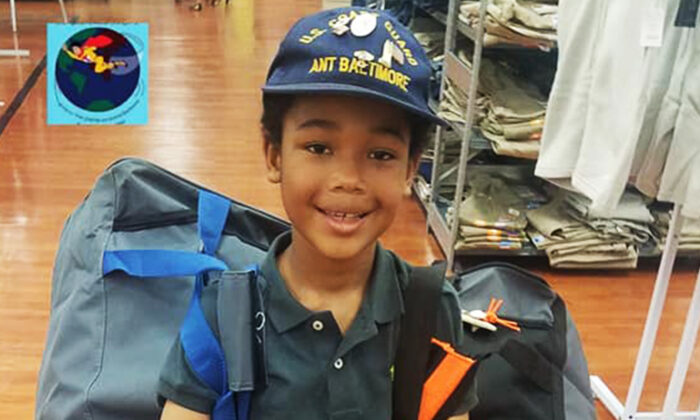 ‘Why Should Heroes Be on the Street?’ 8-Year-Old Raises Over $50,000 for Homeless Veterans

While most 8-year-old boys are busy playing video games and sports with their friends, Tyler Stallings, of Maryland, has different passions that drive him: raising money to house homeless veterans. Being the son, grandson, and nephew of veterans, Tyler made a decision to get involved in the cause of homeless veterans at the tender age of 4.

“After talking to my mom, I really wanted to help build homes for veterans but together we decided on a more realistic goal,” Tyler explained on his GoFundMe page. “We came up with an idea to make hygiene and grooming kits with thank you cards to give to veterans in need. I call them Hero Bags!”

Since that first awakening, with the help of his mom, Andrea Blackstone, Tyler has raised money and assembled and donated over 3,000 Hero Bags to homeless, elderly, and/or disabled veterans in his home state. “They should have the things they need because of all the good thing they’ve done for our country,” Tyler told Good Morning America.

When Andrea Blackstone showed her 4-year-old son a video about veterans on YouTube, they were both inspired. The video also featured homeless veterans walking the streets in search of their next meal or place to sleep. His mom told Good Morning America, “He asked me, ‘If they’re heroes why should they be on the street?’”

Blackstone told WBFF in Baltimore that her son’s first response was heartfelt but difficult to achieve right away. “He wanted us to build houses. I said, ‘Tyler, I’d love to but we can’t afford that.’” But Blackstone recognized how special her son’s impulse was and helped him develop a way to make it come true.

That’s where the idea of Hero Bags came in. The goal is to give needy vets the most essential items, whether it’s winter coats, hygiene products, or simple things like gloves. “Hero Bags can be given to any veteran, but homeless veterans have received the most,” Andrea Blackstone explained to CBS News.

For both mother and son, they understand that the symbolism of the bag is just as important as its contents. “It’s very important to help those people, not only to make them happy [but] to make them feel like, ‘People do care about me,’” Tyler said.

Aside from his mother, Tyler has found a great partner in the form of the Maryland Center for Veterans Education and Training (MCVET), which serves as a focal point for assisting veterans in the state with getting back on their feet. The center has made Tyler their official “superhero,” and he can often be seen there in his red cape, bringing hero bags to a new batch of veterans in need.

It’s estimated that Tyler has brought in over $50,000 of donations, whether monetary or in the form of merchandise for hero bags, to the cause of Maryland’s veteran heroes. Last Christmas season, Good Morning America, in conjunction with Pepsi’s “Give It Forward” campaign, donated $25,000 to Tyler and his mom, which they hope to use for shelters.

The show and the soft drink giant also donated $25,000 to MCVET, which will help the organization keep its doors open and enable it to serve more vets. As his mom told CNN, “For Tyler, being a part of that community as a superhero has been about raising awareness.”

At just 8 years old, the sky’s the limit for what Tyler will do to repay those who served their country.