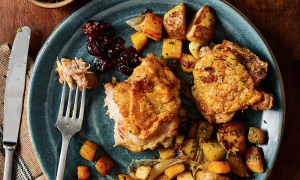 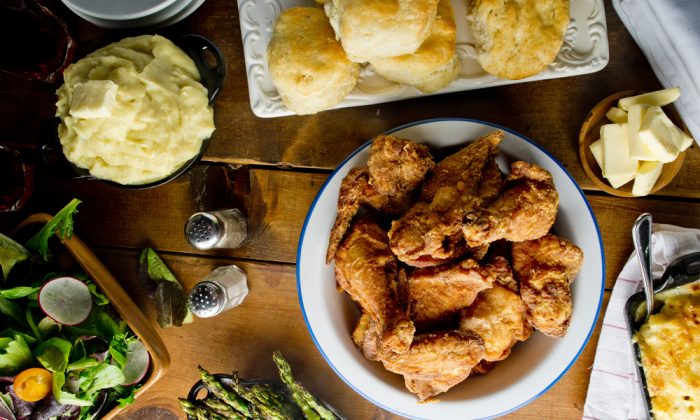 Why Animal Fats Are Making a Culinary Comeback

For the most perfectly golden, shatteringly crisp fried chicken, the flakiest of pie crust and most tender of buttermilk biscuits, reach for the lard. So too for tender tortillas and toothsome scallion pancakes. For superior french fries, a dip in tallow; for the tastiest matzo balls, a spoonful of schmaltz.

Generations past of home cooks knew as much. People around the world have been cooking with animal fats for millennia, and up until the early to mid-20th century, they were staples in American kitchens.

Then, the rise of industrialized food production, bringing with it the introduction—and clever marketing—of Crisco and other cheap, accessible vegetable oils, set in motion a turn away from animal fats. Medical science claims warning of their links to heart disease dealt the final blow.

But in recent years, such claims have come under scrutiny, and sugar and hydrogenated oils have emerged more likely to be the true dietary enemies. Backdropped also by a renewed interest in less processed, “cleaner” foods, and the zero-waste ethos that has permeated restaurants and home kitchens alike, the scrappy, sustainable, minimally processed animal fats of our grandmothers’ kitchens are being once again embraced—albeit in moderation. (It helps, too, that they make for some great-tasting food.)

Linton Hopkins, the chef and restaurateur behind Atlanta’s Resurgens Hospitality group—and an avid animal fat enthusiast—calls these changing attitudes a “renaissance” of sorts, representative of a changing understanding of what defines a “good American diet” as a whole.

“As we took foods through the Industrial Revolution, it really started to become … about speed and cheapness,” he said. “I think we threw away too much of what was great in the past and didn’t help protect it.”

Vermont-based cookbook author Andrea Chesman is among the voices pushing a return to traditional cooking methods and values, with her newest book, “The Fat Kitchen: How to Render, Cure, and Cook With Lard, Tallow, and Poultry Fat.”

She began working with animal fats as an “intellectual challenge,” to reclaim forgotten skills and support her local farmers, while writing her 2015 book, “The Backyard Homestead Book of Kitchen Know-How.” But the results are what won her over: “Once I started working with the fats, I realized everything came out better—that’s what led me to keep with it,” she said.

A World of Fats

Fats are a foundational part of a cuisine. “Every culture has its defining fat,” Chesman said, based on what was historically available to them.

For Chesman’s Ashkenazi Jewish ancestors, hailing from Russia and Poland, that was schmaltz. In preparation for the cold weather months, villagers would slaughter their fattened-up geese and render the fat—a process of melting and straining it, to remove solids and impurities and make it suitable for cooking—to use throughout the winter, from crisping up potato latkes for Hanukkah to mixing into matzo balls for Passover, if it lasted.

Jews who immigrated to urban areas in the United States, finding geese in short supply, opted for chicken schmaltz instead. When Chesman’s grandmother came to live with her, “she ruled the kitchen, and everything she prepared started with a scoop of chicken fat,” Chesman recalls in “The Fat Kitchen.”

Beef fat, meanwhile, forms the basis of much of traditional British cuisine. Rendered tallow was originally used to fry fish and chips, or folded into the crusts of varied pies and pasties; and the beef drippings from a Sunday roast, infused with the meat’s rich flavor (unlike neutral-tasting tallow), were used to cook the signature Yorkshire pudding on the side.

And wherever there are pigs, there is sure to be lard, beloved across the widest range of cuisines, Chesman suspects, “because pigs are easier to raise and require less grazing land than cattle, and they are so generously endowed with fat.” Lard thus plays an inimitable role in the best Mexican tortillas and tamales; Chinese stir-fries and flaky pastries; American Southern fried chicken and buttermilk biscuits.

As with many culinary traditions, the practice of cooking with animal fats was largely rooted in necessity. It arose from what Hopkins calls a “spirit of frugality,” in an effort to make the most of every part of a butchered animal.

Rendered scraps of skin and fat can accumulate into a steady supply to cook with, and pots of saved drippings, once a stove-side standard of frugal American kitchens, stretch remnants of a dish into the beginnings of a new one; any cook who’s made a gravy knows as much. In wartime and post-war Britain, “toast and dripping” (that’s singular) was a thrifty, scraped-together staple.

Fat also played a key role in food preservation, before the advent of refrigeration; such are the origins of confit, the traditional French dish of meat, especially duck, salted and slow-cooked in its own fat to preserve it. Cajun born-and-raised Isaac Toups, chef and owner of Toups South and Toups Meatery in New Orleans, learned his technique for confit cooking from his parents, who as kids would preserve sausages for the winter by dousing them in hot fat. (“We don’t have cellars down here, so sometimes they’d just stick them under the house,” he said.)

As fat-friendly cooking is increasingly welcomed back into home and professional kitchens alike, Hopkins offers a reminder: “Chefs didn’t invent any of this. This all came from grandmothers and grandfathers,” who, Hopkins suspects, “were much better cooks than we’ll ever be.”

Read more: How to Cook With Animal Fats