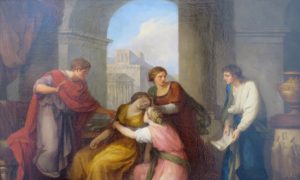 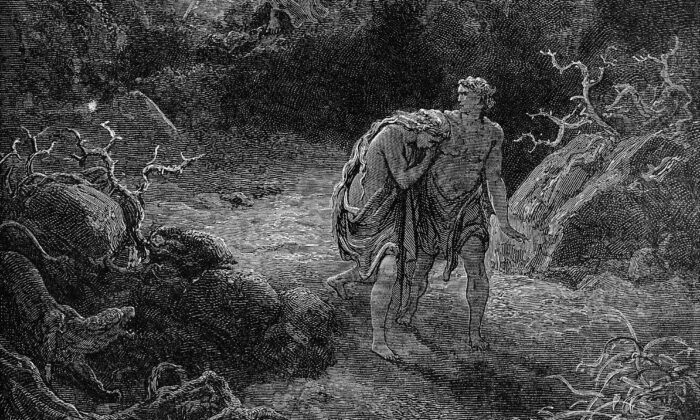 A detail from “The Expulsion of Adam and Eve from Paradise,” 1866, by Gustave Doré for “La Grande Bible de Tours.” (US-PD)
Literature

What’s Wrong With the World?

G.K. Chesterton’s response to an age-old question
By James Sale

In 1910, G.K. Chesterton’s book “What’s Wrong With the World” was published, and the title did not include a question mark.

Indeed, the book is a collection of essays on pressing—burning even—topics of the day such as emancipation, the suffragettes, public schools, ownership, and much more besides. For those unfamiliar with the works (and Chesterton is astonishingly prolific as a writer), I strongly recommend him. His writings have a scope, a flair, and a brilliance that lead me to conclude that he is possibly the greatest writer (excepting the poets) of the 20th century.

Keep in mind that in 1910, World War I had not yet occurred, and the world seemed a much more stable place than perhaps it does today. But according to a Gilbert! Magazine article by James V. Schall, a national newspaper of the period, called The Daily Herald (now defunct), picked up on this title and thought it would make a good question for its readers, so it invited them to write in with their observations on “what’s wrong with the world?”

Of course, it is a fabulous question and one could imagine readers of The Epoch Times writing in to answer it. What is wrong with the world? Perhaps some might say the Democrats. Or the Republicans. Or the Clintons or Trump. Some might think more widely: communism, socialism, feminism, political cant, China, Russia, Iran, flaky allies, or poverty, or homelessness. And so the list goes on, and doubtless, everyone has their reasons for their particular answer.

Chesterton, however, never one to shy away from an opinion, wrote in and gave his two-word answer, which the paper published. What’s wrong with the world? Said Chesterton: “I am.”

In other words, Chesterton took full responsibility for the state of the world and realized that in changing it, he had to change himself first.

Chesterton’s response is in plumb contrast to everything that is going on in the West right now. We have protesters protesting, demanding that somebody else—who? Other people? The government? Political parties?—make the world a better place, but in all this, there is never a sense of self-examination: What have I contributed to the sorry state of the world?

We have Greta Thunberg leading the “children’s crusade” so that millions of children around the world can take a day or more off from school and tell the adults, especially their parents, how they’ve got it all wrong. Greta’s mum and dad now won’t use airplanes and don’t eat meat, as their child instructs them on what’s wrong with the world. Clearly, at this rate, we have to accept that 10-year-olds should have the vote and then what’s wrong with the world can be finally corrected.

Or take feminism and the #MeToo movement. It’s quite obvious that men are to blame and that women have never done anything wrong. Of course, women don’t want to buy expensive and attractive clothes and cosmetics themselves, so that they can look beautiful. Absolutely not. No, women are forced by men to dress up in these astonishing ways, and are compelled by patriarchy to accede to male desires. And here of course, importantly, reparations need to be made.

And reparations need to be made elsewhere for somebody else’s responsibilities. In Brighton as I write this (and I am sure in the USA something similar is going on), the Labour (socialist) Party is having its annual conference. Dawn Butler, the opposition to the government’s secretary of state for “equality” (in the UK these posts are called “shadows” since they mirror the roles in the actual government), is demanding reparation in London, Glasgow, Liverpool, and Bristol for the slave trade.

Compliantly, Glasgow University, a state-funded university, recently announced it would pay 20 million pounds (approximately, $25 million) as reparation for its historic connection to the slave trade. Surely, much backslapping and self-congratulation by the university’s senior elite on their palpable virtue, but who exactly is paying this money? The university? The senior elite themselves? Actually, the taxpayer is paying it; that is, I am myself contributing to it.

The Sins of the Father

Do I feel responsible for the slave trade? No, I do not. I am actually against slavery and against racism, but I am also against this insidious methodology of blaming “others” by creating mobs demanding this and demanding that.

To put this in another context, one of the most wonderful innovations of the Judaic law when it emerged from Israel was the somewhat revolutionary idea that children were not to be punished for sins of their parents and vice versa.

In the ancient Middle East and elsewhere in the world, as well as currently in various places, whole families are eliminated in judicial executions or pogroms; it was customary to wipe them out and everyone (that is, their slaves, servants, or allies) who might subsequently pose a threat. Indeed, the Bible itself gives several brilliant examples of this process. For example, we learn in Esther 9:25 that when Haman’s evil plan to destroy the Jews is unraveled, the king, Ahasuerus, orders “that he [Haman] and his sons should be hanged on the gallows.”

Retribution and reparation stops with the actual perpetrator(s), otherwise the process is endless.

Individually, of course, this does not mean that we should not contribute to the well-being of others, especially the disadvantaged, and take responsibility for helping them; after all, all religions advocate compassion. But this is quite different from the collective blame game that is entirely political in nature.

The Self-Maiming Sin of Blaming

Blaming others, then, is the vice besetting what’s wrong with the world. In fact, it is one of the triumvirate of psychopathologies (along with projection and denial) that worst afflict us as human beings. If we consider briefly for a moment the story of Adam and Eve in the garden at the beginning, when they were perfect, we find in the fall of mankind all three of the triumvirate of psychopathologies there in virulent form. For now, let us just consider blame.

Having eaten the forbidden fruit, Adam blames Eve, and Eve blames the serpent. In other words, they together and individually are not responsible for their actions.

Blame and blaming may be said to be the most endemic, the most pernicious, and the most destructive of all the psychological vices that beset mankind; it is the kingpin of all that is negative within us. Small wonder, then, that it wreaks such havoc around us. And it is very difficult to counter.

It is little appreciated, but every time we blame, we are quite literally killing ourselves; there is self-death involved in blaming others. For when we blame others or someone, we are denying a part of reality that has been created, and saying that we are not part of it. Essentially, we are denying ourselves as co-creators of reality and the acceptance of things as they are.

This is why blame is a kind of blasphemy: We are denying our godlike powers to co-create.

In short, we are exiting and isolating ourselves from the Consciousness that drives the universe and of which we are a part. In theological parlance: We are heading for hell, but in this secular environment now, we need to understand hell not (only) as a place beyond life, but as a state of mind we enter in the here and now.

Chesterton, then, leads us away from all this. What’s wrong? Me. I am wrong, and what am I going to do about that? To be clear, this is not about beating myself up, generating low self-esteem through self-criticism; it is exactly the opposite. It is taking responsibility for myself and my contributions. It is the only way that is really sustainable.

James Sale is an English businessman whose company, Motivational Maps Ltd., operates in 14 countries. He is the author of over 40 books on management and education from major international publishers including Macmillan, Pearson, and Routledge. As a poet, he won First Prize in The Society of Classical Poets’ 2017 competition and recently spoke at the group’s first symposium held at New York’s Princeton Club.