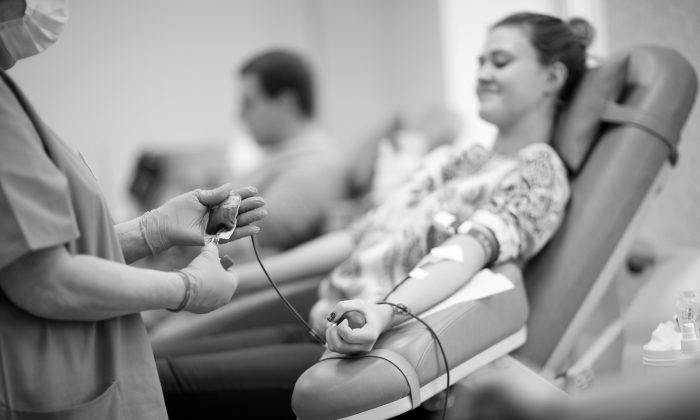 What Would You Do to Save a Life?

In these chaotic times, some people are looking for simple steps to make the world a little brighter for those who are suffering.

What if one procedure could make the difference between life and death for a family member, friend, or stranger? Millions have already signed up.

Isaac, a resilient N.C. 3-yr-old is searching for a marrow donor. https://join.bethematch.org/isaac Read more about his story: http://p.ctx.ly/r/nwv

It’s called bone marrow donation, and it’s not as complicated as it sounds.

“Right now a marrow or stem cell transplant is a cure for over 80 different diseases,” said Aimee Haskew, a community engagement representative for Be the Match, the largest bone marrow registry in the world.

To join the registry, potential donors simply rub a cotton swab on the inside of their cheek to provide cells to determine their tissue type.

Kits are provided at local donor drives or can be ordered online for no cost.

Once a person joins the registry, their information is searched over 3,000 times a day by doctors looking for a match for a patient.

Aaron Lee, a senior consultant with Kaiser Permanente, is one of those patients.

“It’s very urgent. He was diagnosed with Stage 4 Lymphoma in September, and this was just after his 33rd birthday,” said his friend Dan Huynh, a research analyst at UCLA, who met him nine years ago in college.

“It was very sudden. None of us suspected that he was even sick at all, not even himself,” she said.

After hiking in the Sequoias last summer, Lee started having joint pain and persistent fevers, and he did not get better. Now he needs a bone marrow donation, and his friends have organized rallies and drives and contacted local media to encourage more people to join the Be the Match registry, because a match for him has not been found.

Lee’s mixed Chinese and Jewish ancestry, like other minority groups, makes it more challenging to find a match.

Firefighters Save Lives With Marrow Donation

“Even if we can’t find a match for him, it increases the chances of finding a match for so many other folks, especially within ethnic minority communities like Chinese, Vietnamese, Hispanic and African-American,” said Huynh.

Huynh and other friends of Aaron have helped register more than 1,000 new names with Be the Match from the Los Angeles area and across the country.

If someone on the registry is determined to be a match for a patient like Aaron, there are two possible procedures.

“80 percent of donors will actually donate their blood stem cells, and it’s a procedure very similar to a platelet or a plasma donation,” said Haskew. “Only 20 percent will still donate marrow, and even then when you donate marrow, you are under general anesthesia for the procedure, which means you’re asleep and you don’t feel a thing during it.”

Huynh urged people of all ethnic backgrounds to visit BeTheMatch.org to join the registry.

“If there’s a match, you’re somebody’s lifeline,” she said. “You can actually save someone’s life.”

Writer and filmmaker Kevin McDevitt, 34, knows the anxious feeling of not knowing whether or not someone will be able to save his life.

“I had been really fatigued, tired for a solid year or year and a half,” he said, until his diagnosis of two very rare blood disorders: severe aplastic anemia and PNH (Paroxysmal nocturnal hemoglobinuria) in October 2014.

“It was totally shocking,” he said.

McDevitt’s doctor told him not to immediately research his diagnosis online, but he did anyway, because he wanted to tell his family what happened. He found out that his disorders, if left untreated, could kill him in just a few years.

His doctor said bone marrow donation was the only potential cure. But there was only a 30 percent chance he would find a match within his own family. His sister was the best choice, and her tissue type was sent to be tested.

They finally received the answer around Thanksgiving. She was a match.

“I just cried, I was just so relieved,” said his sister, Dr. Meghan McDevitt-Murphy, an associate professor of psychology at the University of Memphis.

McDevitt’s doctor recommended the more invasive procedure of acquiring bone marrow, which required McDevitt-Murphy to travel to Kansas City for surgery. But she said she wasn’t worried.

“Knowing that there was something that I could potentially do that would help save my brother’s life, it really [didn’t] matter to me what it was,” she said. “If all these people sign up to do it for a stranger, it’s clearly not too much of a burden.”

She said after the procedure, she was sore in her lower back for about a week, since they took the bone marrow out of her hip. She was also a little more easily fatigued for a few weeks as her body replenished her own marrow.

After the procedure, McDevitt-Murphy then visited her brother just in time to see that her donation had been a success, and his blood levels were starting to slowly rise again. He was in the hospital for about a month.

Despite the slight disruption in her life, McDevitt-Murphy said she is now on the official Be the Match registry, and she would love the opportunity to donate again.

“I certainly would hope that if I needed an organ transplant or a bone marrow transplant, that there would be someone out there willing to do that for me,” she said.

After McDevitt started to feel a little better, he and his wife made a music video parody of Taylor Swift’s song Bad Blood to encourage other people to join the registry.

McDevitt said it took about a year to feel normal again. Now he’s one year and nine months post transplant and traveling the world with his wife, celebrating his second chance at life.

“Life is great,” he said. “It feels awesome. It’s kind of hard to believe, almost feels like a dream to think about just how much of a struggle things were for quite some time.”

The couple started their travels in the Galapagos Islands in Ecuador, took a road trip along the west coast of the United States in a camper van, sublet an apartment in New York City for a month, and spent some time in Cuba with a Spanish language immersion program. Then they were back in the United States for Christmas, visited Iceland, and are now in Spain taking more language classes. They will soon make their way back to California after backpacking through Europe.

“It was totally life-changing for both of us and just so much fun. Neither of us had ever done anything like that,” he said.

On Random Acts of Kindness Day, These Good Deeds Will Warm Your Heart

McDevitt owes much of this opportunity to the kindness of his sister.

As for McDevitt-Murphy, she hopes that anyone who is considering becoming a donor will definitely look into it.

“I would really encourage people to become part of the national donor registry because it’s just a wonderful gift you could give to someone,” she said.

Haskew said about 1 in 40 people on the registry will be a possible match for someone and will be asked to get further testing, and about 1 in 430 will go on to complete the donation procedure.

She urged people to check out the Be the Match website. Haskew herself is on the registry and donated stem cells to a patient about four years ago.

“In that moment I received that phone call, that meant someone in the world was dying,” she said. “She was dying. There were no other options for her. She needed a transplant. It was her last chance, and I was one of the few in the entire world who could help her. So there was no way I was going to say no.”