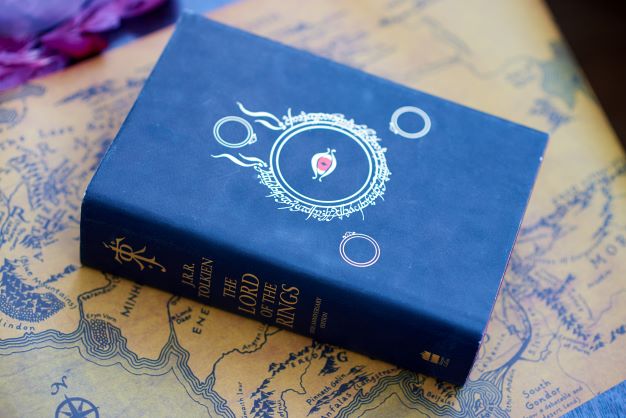 A copy of J.R.R. Tolkien’s epic myth “The Lord of the Rings” rests on a map of Middle Earth. (Astfreelancer / Shutterstock)
Arts & Tradition

What ‘The Lord of the Rings’ Teaches Us About ‘Being Woke’

We all like stories, or sometimes (using posher language) narratives.

There is a good reason for that: “Narrative may be regarded as a primary act of mind,” said professor Brian Cox in his introduction to the English National Curriculum that was being introduced into UK schools in 1988. More recently, Frank Wilczek in his book “A Beautiful Question” commented that “humans are especially adapted to think in story and narrative.”

It’s important, therefore, that we translate whatever is happening to us in our experience, especially when it is important, into a story form or analogue. The analogue is a story we all know, but which somehow surprisingly fits the circumstances. This process helps us see more clearly what it is that we are dealing with and helps contextualize it.

A Loss of Understanding

In general, most see the idea of being “woke”—used by both liberals and conservatives—as a political or social issue (which includes critical race theory, social justice, and gender theory), but much less as a philosophical or even theological matter. This is partly because in the West, we are beginning to lose the vocabulary that would enable us to define “woke.”

One word that has been conspicuously absent from our vocabulary for possibly the last 30 years or so is the word “evil.” Nowadays, we seem unwilling to describe complete psychopaths, criminals, and others in a similar vein (alongside their corresponding actions) as evil. Instead, we have developed another—a woke—terminology: We say that someone’s actions are “unacceptable.” We refrain from any negative language that might describe just such a person and, dearie me, that might be construed as judgmental.

It’s as if by not judging, we have avoided judgment ourselves. However, we neglect the fact that the failure to judge is a judgment on our self: We have failed to recognize, acknowledge, and respond appropriately to evil. We have in biblical words called the evil good (Isaiah 5:20).

There are many more examples of this sort of linguistic pussyfooting around, but the net effect is the same: It seeks to redefine morality. And it does so, not by straightforward argument but by this neat trick of verbal substitution. Sure, if we are talking about somebody like Hitler, we may invoke the old word “evil” with a sort of nostalgia, really, but that is only because at this point it would seem risible to describe Hitler’s behavior as “unacceptable.”

But bit by bit, word by word, we find our understanding of what morality means being undermined. I need hardly add, then, how the deletions, alterations, and perversions of perfectly good words in the realms of gender, race, and disability contribute to this ongoing sense of confusion and uncertainty.

However, while deleting and changing words here and there is gradually working its evil magic (or do I mean unacceptable magic?), there is another force in words that is much more difficult to counter: that is, narrative or stories.

People love stories, and once you hear a great one, it is difficult to root it from the heart and soul. The greatest stories of all are mythical ones, and myth here is not contrary to fact, either—a story can be mythical and historically true. As Ceylonese historian of art Ananda K. Coomaraswamy put it, “Myth is the penultimate truth, of which all experience is the temporal reflection. The mythical narrative is of timeless and placeless validity, true now, ever and everywhere.”

The Analogue of Tolkien’s Story

J.R.R. Tolkien’s epic myth “The Lord of the Rings” supplies a wonderful context for us to understand being woke. It was long thought that in a subtle way the book, while allegedly being about the distant past of humans living in Middle Earth, was really a prophecy about humanity’s future. First, the immediate and close future (we call that the present) can be seen, for example, in the slave labor of Saruman and the foul pits of Mordor, where these represent the industrialization of Birmingham in the first half of the 20th century, or the great war against the Eye of Sauron being enacted in World War II against Hitler.

But I think “The Lord of the Rings” goes much deeper than that. In many of its scenes and ideas, we can see the playbook of woke-ism.

Take some simple concepts: Being woke is not one force, one identity, or group, or nation that we can point out and say, “Here it is.” No, rather it is like a hydra: many-headed. Aside from Sauron himself, the arch enemy, there are Saruman, Orcs, Uruk-hai, Balrogs, Shelob, Cave Trolls, and more besides. And they operate in different ways. The Orcs are rather like the social media trolls; they swarm their victims. Sheer numbers prevail. But we also note that they have a weakness: They cannot face light. So, exposing them to daylight is very effective.

But the Uruk-hai have been bred to face the light. I see these as the professional woke journalists and administrators who have infiltrated all our institutions. These are dangerous indeed, since they are not ashamed of their own falsehoods and justify themselves even when the evidence points otherwise.

Then again, the Balrog is very different: a creature of the deep that is dangerous to wake up. We might consider the Balrog analogous to a prestigious and powerful woke newspaper or TV network. You cross it at your peril. Like the Balrog, these newspapers and TV channels are deep-pocketed.

Shelob, on the other hand, is more like one of those large and self-appointed NGOs and “charitable” organizations that patiently weave their spidery threads and “compassionate” propaganda, waiting for the unwary to step into their traps. You may recall that Shelob is situated high up the mountainside at the very entrance to Mordor. The point about being high up is that the NGOs are always assuming the moral high ground and pointing to their own virtue.

For the Sarumans of this world, we have a special expression: “useful idiots.” This expression has been attributed to Lenin to describe “do-gooders” who were sympathetic to the communist cause. Essentially, they were people blinded by utopianism, doing good, and being kind. They never saw the real and ruthless nature of communism and its dark deceptions—until, of course, it was too late.

Saruman was Sauron’s useful idiot—never grasping the moral consequences of his alignment. The particular danger of the useful idiot, as we see with Saruman, is his drawing others into his crusade against mankind.

It’s helpful to see the “woke” in this way because in doing so, their threat is lessened. Yes, they are dangerous, but we know they can be overcome. Indeed, “The Lord of the Rings” tells us that three things are necessary for the defeat of evil. The first is realizing that it does have a source, a will, an Eye if you will, that must be countered—directly countered, however we strategize to do that.

Second, and perhaps most importantly of all, the enemy cannot be overcome by any individual alone. If there is one thing we learn from this story, it is that a confederation of forces is necessary. An old alliance (in this case, of Humans, Elves, Dwarves, Hobbits, and Wizard) is necessary to defeat evil. We must band together and be clear about who the enemy is.

In this brief overview, then, I hope you see how important stories like “The Lord of the Rings” are in our dealings with those who are woke. They give us massive hope and show us what the true values are that we should be pursuing.

Oh! Did I forget? The third thing? Obvious, really, isn’t it? Courage.