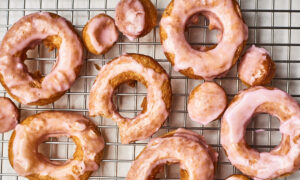 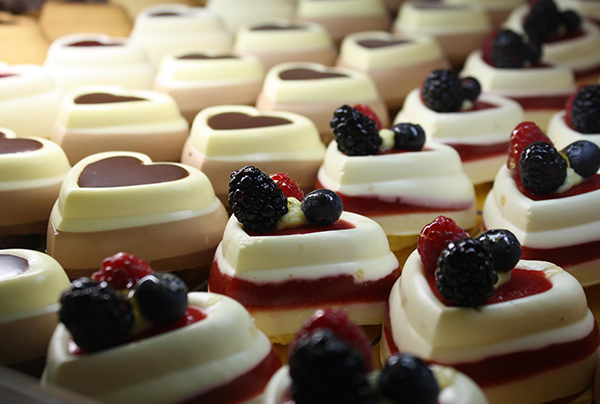 What Romance Looks Like When Chefs Do the Wooing

A Dish That’s Won Over My Sweetheart:
Kofta Dilnaaz. My wife’s tastes aren’t simple so this was the one dish I could whip up that I knew would please her. It’s complicated yet homey. The name is Kofta Dilnaaz (cheese dumplings in a really rich gravy) and “dil” in Hindi means “heart.” So this was food from my heart and it won her over—on the night I proposed to her! Koftas in one hand, her dog, and ring in the other. It was a winning combination!

A Must-Have Ingredient for a Home-Cooked Valentine’s Day Dinner:
Anything that is luxurious and romantic. And for me, especially when it comes to cooking Indian food, that ingredient is rosewater. It’s very flavorful and of course, who doesn’t want to smell roses on Valentine’s Day! Rosewater’s subtle flavor and aroma lightens up any dish. My favorite dish in which to incorporate rosewater is Biryani, as well as Gulab Jamun for dessert [dumplings made with thickened milk soaked in rosewater syrup].

Recommended Valentine’s Day Dish at Awadh:
I would recommend all the slow cooked dishes (prepared with the Awadhi region of India’s “dum pukht” technique) especially the Lagan Ki Raan (tender leg of lamb), Nali Ki Nihari (lamb shanks simmered in an aromatic stock), and Khaas Korma (chicken tikka with cashews and saffron gravy). They are a labor of love, as it takes a really long time to prepare these dishes. They actually remind me of relationships—you need to nurture them. They are also luxurious, smooth, and were the meals of the nawabs (kings), which is how you should make your significant other feel on Valentine’s Day—like royalty!

A Dish That’s Won Over My Sweetheart:
Spaghetti Cacio e Pepe. The first time my now husband Leonardo Metalli came to visit me in NYC from Rome, I made this for our first meal together in my home. I thought a dish with pepper would be exciting and is an aphrodisiac. I like to spice things up and I thought it would be romantic, too.

I was nervous because Leonardo is a 10th-generation Roman from Rome, Italy, and he is definitely an expert on eating Spaghetti Cacio e Pepe living in Rome his whole life since it’s the most famous Roman dish. Also, since Leonardo is a TV journalist on RAI Italian Television (TG1) he could have publicly shamed my Spaghetti Cacio e Pepe but he loved it and we just got married last month!

A Dish That’s Won Over My Sweetheart:
The dish I prepared to win over my sweetheart was one of the first meals I ever made him when we first started dating. I proudly prepared him my nonna’s Gnocchi di Patate (potato gnocchi) with rich, slow-cooked pork shoulder ragout finished with fresh goat cheese. The second course was a beautiful and simple locally raised Bistecca alla Fiorentina, and I ended the meal with something not many have ever even heard of: gnocchi dolci (sweet gnocchi)! I had him lock stock and barrel after that!

A Must-Have Ingredient for a Home-Cooked Valentine’s Day Dinner:
Honestly, the most important thing when cooking your Valentine’s Day meal would simply be to use the fresh, high-quality ingredients available to you. When you have a great bottle of wine, some freshly shucked oysters, and a simple and beautiful plate of pasta, you can’t go wrong. Whatever fish or meat you add alongside that will only up the ante—and of course, not to be cheesy, but a little chocolate to end the meal has always been well received!

Recommended Valentine’s Day Dish at Eataly:
I’m going to recommend a dessert! “Cuoricino” is a special heart-shaped dessert that will be available in all of the restaurants at Eataly on Valentine’s Day. It’s made with white chocolate Bavarian cream with a raspberry gelée.

A dish That’s Won Over My Sweetheart:
Early on in our relationship, my wife and I rented an apartment in Paris for a month. Her parents were celebrating their 25th wedding anniversary and came to visit. I celebrated by making the perfect roast chicken with roasted vegetables and potatoes. They all absolutely loved it. Twelve years later it’s still one of my wife’s favorite dishes!

A Must-Have Ingredient for a Home-Cooked Valentine’s Day Dinner:
Well you really can’t go wrong with a bottle of champagne, but if I had to pick an ingredient I would say caviar because it’s impressive and you can never mess it up!

Recommended Valentine’s Day Dish From Landmarc or Ditch Plains:At my restaurant Landmarc, we’re offering some delicious specials for Valentine’s Day at both Tribeca and Time Warner Center. I love starting any meal with oysters, and for the main course, I’m really loving the roasted turbot with leeks fondue and fingerling potatoes. It’s a great combination—decadent but not too filling.

A Dish That’s Won Over My Sweetheart:
One of my favorite things to eat is Ravani, a dish native to my hometown of Thermo. It is a simple dessert, made from semolina and olive oil. He was familiar with it, but never had it the way I make it. That day, I added some extra ingredients including A LOT of powdered sugar and served it with a sweet dessert wine, Mavrodaphne. When he leaned in to smell the wine, I blew powdered sugar all over him! He looked at me for a minute with a very serious face, and then laughed, and I knew I had won him over.

A Must-Have Ingredient for a Home-Cooked Valentine’s Day Dinner:
Love! But seriously, I recently saw a quote that said, “Cooking is love made edible” and I thought it was a perfect statement. On Valentine’s Day, you should choose something that you and your partner will enjoy—something that reflects a shared moment in your relationship. For me, nothing is better than shellfish. (My favorite is giant prawns, like the Garides Santorini at my restaurant). They’re delicious, easy and a little bit messy which can be fun if you’re celebrating at home. Plus, they were used as aphrodisiacs in ancient Greece!

Recommended Valentine’s Day Dish From Loi Estiatorio:
I think the Psari Sto Alati, our salt-baked fish for two, is a great dish for Valentine’s Day. Obviously, being a dish meant for two suits the occasion beautifully, but besides that, it’s light and refreshing. A lot of couples choose to share rich, indulgent foods on this holiday. However, there’s something to be said for being satisfied, but not overstuffed after Valentine’s Dinner. It makes whatever happens after dinner much better.

A Dish That’s Won Over My Sweetheart:
I can’t remember what dish initially won over my wife’s heart, but I remember what dish really impressed her recently. The dish is called “Spicy Salmon Crostini,” which uses a salmon skin “chicharron” as a base instead of a baguette slice. The dish also has pickled daikon, nori powder, and caviar. I created this dish shortly after a very inspirational vacation in Napa Valley. It must have been a dish satisfying on many levels because she orders it all the time at Mira Sushi & Izakaya.

A Must-Have Ingredient for a Home-Cooked Valentine’s Day Dinner:
I believe an absolute must-have ingredient is chocolate. Not only is it a classic gift, but also a deep, rich, and sweet ending to a meal always caps off the night on a high note.

Recommended Valentine’s Day Dish Mira at Sushi & Izakaya:
We are offering a four course prix-fixe menu for $55. We are offering multiple options for each course, but if I had to choose one, it would be the Kyoto S’mores dessert. Valentine’s Day is a relatively new holiday in Japan, so the traditions there are a little different than in the United States. Typically women give chocolate to men and on a later holiday called “White Day,” men give marshmallows to women. Our dessert features a homemade marshmallow, matcha white chocolate sponge cake, graham cracker crumble, and vanilla ice cream. It’s a spin on an American classic with a Japanese twist!

A dish that’s won over my sweetheart:
A dish or meal doesn’t necessarily have to reflect the particular occasion you’re celebrating—you want to evoke a feeling or emotion. When I first moved to New York, my wife and I were going through our paces of being overwhelmed and under-appreciated. For her birthday, I decided to cook her the national dish of Brazil (she’s from Sao Paulo) called Feijoada. It is essentially a black bean stew, but the particular ingredients are pretty hard to find. I took a day off and went out to a little Brazilian market to find the 12 or so specific cuts of meat and herbs to make it just right. When she came home, she thought it was cute that I “tried” to make it, but when she tasted it, she got emotional because It was exactly what she had grown up with.

A must-have ingredient for a home-cooked Valentine’s Day dinner:
Well, I’m far from impartial when it comes to this next ingredient, but I would have to say oysters! Aside from the high amounts of zinc which has built them as a natural aphrodisiac, they are a great way to judge someone’s natural “prowess.” Do they slather it with cocktail sauce and put it on a cracker (don’t care what it tastes like)? Do they cover it with hot sauce and knock it back like a shot (little too eager to finish)? Or do they go au naturel, chew it a couple times and really savor the experience? (That’s a keeper right there!)

Recommended Valentine’s Day dish at L&W Oyster Co.:
Again, I equate food choices with personality, so I’ll break down what dessert choices at L&W Oyster Co. say about you:
• P.B&J Baked Alaska: You like to be playful and silly but also a bit of a show off.
• Flourless Chocolate Torte: You are sophisticated and conscientious.
• Sticky Toffee Pudding: You don’t have to be flashy or sophisticated, as long as you are amazing on the inside.