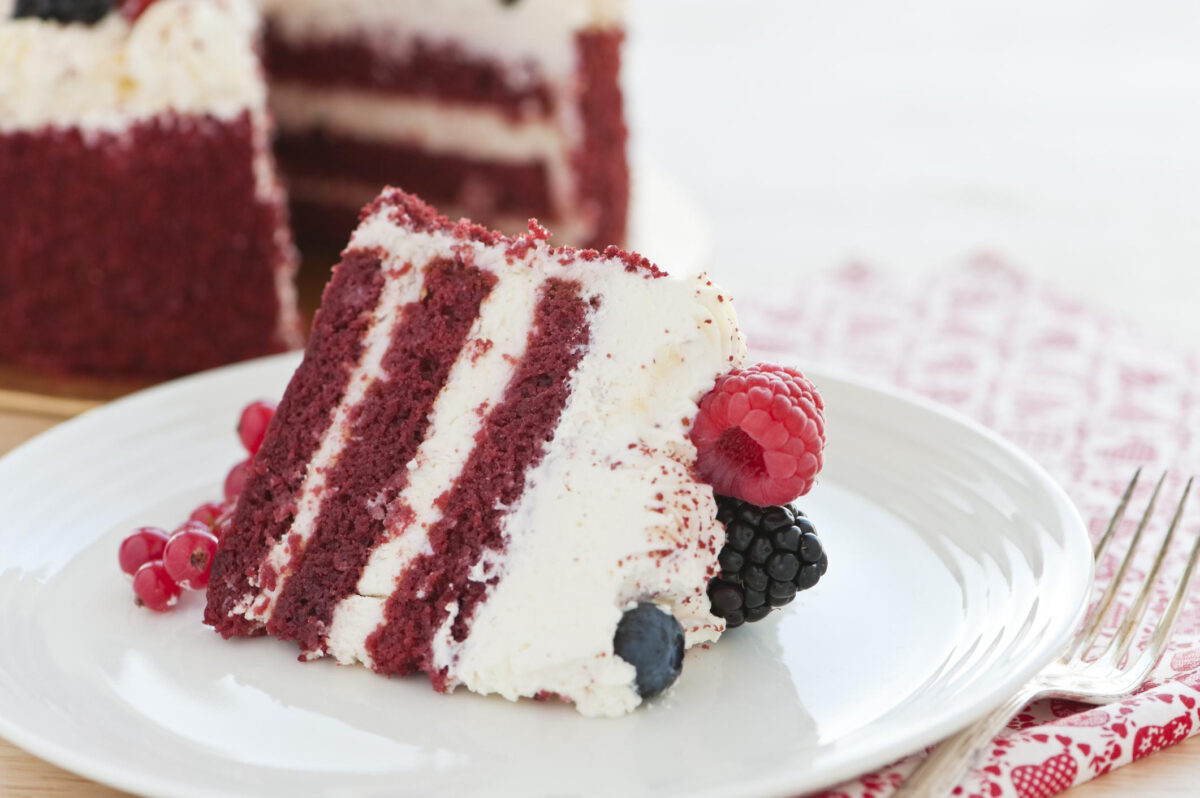 What Is Red Velvet Cake?

It’s almost impossible to walk into a bakery and not see red velvet cake on the menu. Over the years, this uniquely colored, decadent cake has become a popular flavor for Valentine’s Day, birthday parties and even weddings.

This red phenomenon has been around for a very long time but what is red velvet cake? And why is it so beloved?

What is Red Velvet Cake?

The answer is quite simple. It is a classic chocolate buttermilk cake with a distinctive red hue. Like most dishes, the ingredients for this cake have changed and developed over time.

Traditionally, red velvet cake is made of classic pantry staples such as buttermilk, eggs, cocoa powder, vinegar, flour, sugar, baking soda and salt. A French-style butter roux icing classically covered this red delight but nowadays, most people use cream cheese frosting or buttercream as a substitution.

Why Is Red Velvet Cake Red?

There are different conclusions to the mystery behind the color of this red chocolate dessert. Some people believe that it’s rooted in a chemical reaction from combining vinegar and buttermilk with non-alkalized cocoa powder, which results in a dark maroon color.

There are also claims that during World War II, bakers would use boiled beetroot juice in their cakes due to rations, which resulted in a velvety soft texture and, of course, a red color.

Today, there’s no real reason red velvet cake needs to be red. It’s just for visual appeal. If you’re not feeling red, you can easily use another color food dye or leave it out entirely for velvet cake, which is what the recipe is called when the coloring is omitted.

Where Did Red Velvet Cake Originate?

It’s hard to pinpoint who deserves the credit as the creator of red velvet cake. Some credit Betty Adams, the wife of third-generation Adams Extract owner, for the ‘original red velvet cake recipe, which features the company’s red food coloring as well as their vanilla extract. The former chefs of the Waldorf Astoria New York also claimed the original recipe, which included both red food coloring and canned beets.

The popularity of red velvet cake continues to grow as people develop new ways to showcase this red dessert. Other than cake, there are red velvet cookies, cupcakes, brownies, fudge, funnel cakes and even hot chocolate. If you’re not too confident in your baking skills, you can find red velvet boxed cake mix at your local grocery store. Maybe the next time you celebrate Juneteenth or Christmas, bring along a red velvet cake. This vibrant cake is one of the many amazing dessert recipes to try at home.

This recipe was adapted from “A Gracious Plenty,” edited by John T. Edge and published in the Chicago Tribune.

For the cream cheese icing:

Step 1: Heat oven to 350F. In a large bowl, beat together 1 1/2 cup sugar, 1/2 cup shortening, 2 eggs, 1 teaspoon vanilla and 1 teaspoon butter flavoring with a mixer on medium-high speed until creamy, about 5 minutes.

Step 5: For the icing, in a large bowl, beat together 3 cups confectioners’ sugar, 8 ounces cream cheese, 1/2 cup butter, 1 tablespoon milk and 1 teaspoon vanilla with a mixer on medium-high speed until smooth. Spread icing on one layer. Top with another layer; spread with icing. Top with the third layer; spread icing on top and sides of cake.