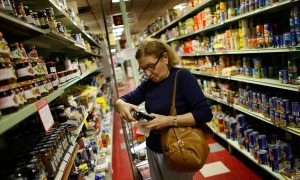 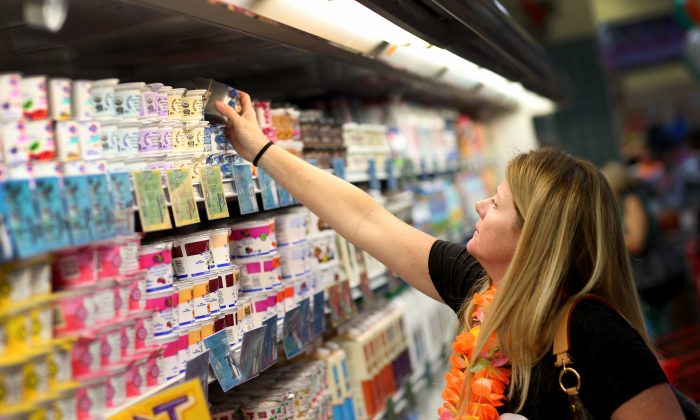 A customer shops for yogurt during the grand opening of a Trader Joe's on October 18, 2013 in Pinecrest, Florida. (Joe Raedle/Getty Images)
Food & Dining

Stroll through any supermarket and you’ll see plenty of packaged foods with a label claiming that the product is “100% natural,” “all natural,” or some similar phrase suggesting that the food is minimally processed.

Consumers are increasingly aware of the connection between a healthy diet and a healthy body, and choosing food products that they perceive to be better for their well-being, including unadulterated, chemical-free foods.

Food companies have taken notice. Today, the “natural” label appears on everything from sugar-alternative sweeteners and cookies, to cheese and fruit snacks.

Why Most Food Labels Are Wrong About Calories

But what does the word really mean? The Food and Drug Administration (FDA) has an informal guideline for “natural” to mean food that does not contain “added color, artificial flavors, or synthetic substances,” according to the agency’s website. But the FDA does not set any specific standards for using the word “natural.”

That’s why a growing number of consumers are filing class-action lawsuits against food companies alleging the companies are falsely claiming their products as “natural” when in fact they are not.

Several major food companies and retailers have recently come under fire. McNeil Nutritionals, a subsidiary of the consumer and health care products giant Johnson & Johnson, was sued for selling the tabletop sweetener, Nectresse, as primarily made from monk fruit.

About a year ago, food-processing company Cargill agreed to a $6.1 million settlement after a similar lawsuit challenged the labeling and marketing of Cargill’s Truvia Natural Sweetener products. The suit alleged that the sweetener was made of highly processed, synthetic ingredients.

Not only are food companies being scrutinized, retail stores are also at risk of lawsuits.

As part of the settlement, the court still allowed Cargill to advertise Truvia as a natural sweetener, so long as the company also added an asterisk at the end of their taglines, along with a sentence telling consumers to go on Truvia’s website for a detailed explanation of how the sweetener is processed.

Not only are food companies being scrutinized, retail stores are also at risk of lawsuits. The popular grocer Trader Joe’s was sued for selling several packaged items as “all natural” or “100% natural,” despite containing chemical additives like ascorbic acid, xanthan gum, and potassium carbonate.

Last year, the company also chose to settle the case, allowing consumers who bought those items to receive compensation.

Typically, the lawsuits center on a legal question known as the “reasonable consumer” standard, which considers whether a typical consumer would interpret the company’s advertising to mean something other than what it claims.

Food company Dole escaped litigation last year when a California federal court ruled that the plaintiff did not offer up enough evidence that “reasonable consumers” would not expect citric acid and ascorbic acid to be in Dole’s fruit cups.

“Without any evidence that the FDA’s informal definition has actually been violated, Brazil [plaintiff] cannot rely on that definition as ‘evidence’ that reasonable consumers would likely be deceived by Dole’s ‘All Natural Fruit’ label claim,” the presiding judge wrote in her judgment.

Nevertheless, legal claims of deceptive advertising are catching up to food companies. At a major food industry event to be held in October, one expert panel will discuss that exact topic. The description of the event said, “Who has the high ground? The litigators who say they’re out to protect the public or the food companies who seek to promote their products?”

Perhaps the question will be answered in a future court decision.