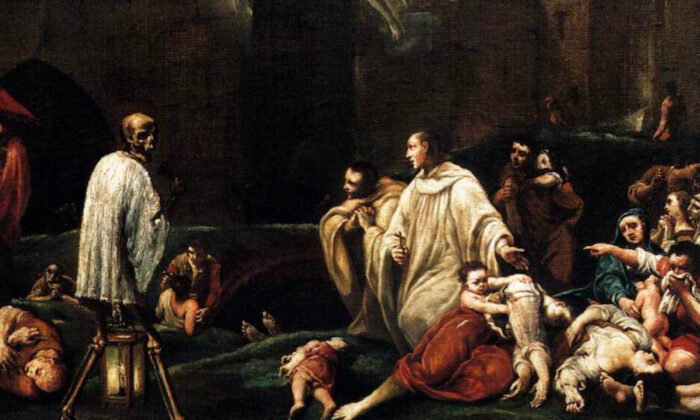 "The Blessed Bernardo Tolomeo's Intercession for the End of the Plague in Siena" by Giuseppe Maria Crespi, 1735 (detail). (Public domain)
Family & Home

The worldwide pandemic that is affecting all of us is having a profound impact not only on our daily lives but also our spiritual lives. I’ve certainly noticed an increase in spiritual questions, ideas, quotes, and ponderings on my social media feeds and in real-life, from-a-distance conversations. Have you?

It seems only natural. When big things happen, when uncertainty abounds, and when we’re forced to stop racing through life—as this situation has certainly imposed—we tend to seek greater understanding, higher wisdom, and fundamental truths.

Interestingly, many of the spiritual teachings that have been passed down for thousands of years seem to have similar things to say about major manifestations like this one. Though these traditions originated in separate corners of the world, long before worldwide travel was a thing and communication technology existed, they convey a common message.

Both Eastern and Western spiritual traditions have offered perspectives on why disasters like pandemics occur, putting the onus on the individual and the need to look inward in the face of such events.

The story of Zhang Daoling, an ancient Taoist who lived during the Eastern Han Dynasty (25 B.C.–220 A.D.) describes how he guided his disciples to answer plagues with repentance. Zhang asked those who were sick to write down the wrongdoings they had committed throughout their lives, and then vow to the divine that they wouldn’t commit bad deeds again.

Many who followed his advice recovered and were cured. As word spread, hundreds of thousands of lives were saved.

Buddhism has similar lessons. Buddhists believe that life inherently entails suffering and that everything that happens in life is a result of karma. Buddhism fundamentally teaches that good karma or virtue is rewarded and that bad karma or sin is punished, and that being virtuous can protect one from disaster.

Recently, for example, Orthodox Rabbi Shlomo Aviner said in light of the pandemic: “In our days, man thinks he is God, that he is the master and can decide what is good and bad,” according to the Christian Broadcasting Network. “If this is the case, that mankind is proud, mankind knows everything, understands everything, let us see you fight the smallest of God’s creations. This creation is called corona, a crown,” he said, referring to the virus. “We must restore the crown to God.”

Similarly, Rabbi Shlomo Zalman (Sam) Bregman told FoxNews, “The Jewish tradition teaches that the most we can do is use these moments as opportunities to reflect, introspect, and improve as human beings. The call of the hour is to bring our lives into conformity with the divine will, and what God desires spiritually proper and ethical human beings to look like.”

The Bible speaks directly of plagues throughout, describing the importance of self-reflection and reviewing one’s sins, repenting, and asking for God’s forgiveness in the face of disasters.

This particular pandemic came during the Christian season of Lent, a time of inner reflection and repentance for one’s sins, and the Jewish holiday of Passover, likewise a time of inner searching and one that commemorates God’s liberations of the Israelites from Egypt by casting, yes, plagues upon the Egyptians.

If we’re looking for a lesson in all of this, perhaps it’s that the best response on the part of each of us is to reflect and search within ourselves, admit our mistakes, correct ourselves, turn our attention to God, and ask for forgiveness and guidance.