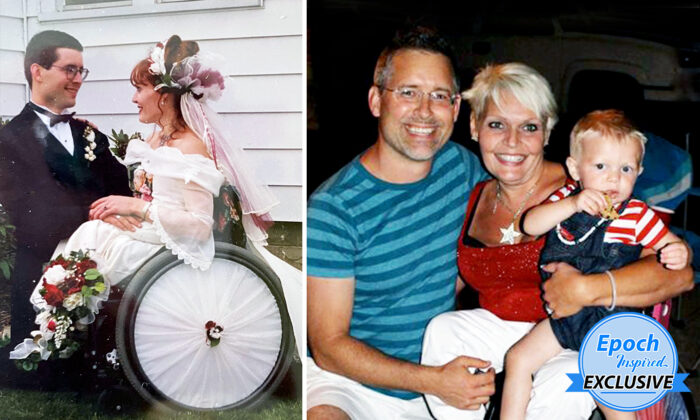 ‘We’ve Taken Each Other On’: Woman With Spina Bifida Shares Insights From 23 Years of Marriage

A wife, mother, and academic with spina bifida is sharing her insights on life’s trials and triumphs after 23 years in a marriage.

Bethany Hoppe, 51, explained to The Epoch Times, “Socially, our western culture doesn’t automatically take into consideration that people with disabilities marry, so celebrating 23 years of marriage might get a double-take, which is great, if it can be used to educate and enlighten!”

Mom-of-two Bethany was born with spina bifida—a birth defect of the spinal column that develops within the first six weeks of pregnancy—and uses a manual wheelchair. Originally from Pennsylvania, she now lives in Washington, D.C. metro area with her husband, Tyson Hoppe, 53, and son who attends third grade.

Both educated to a master’s degree level, Bethany and Tyson run a dual-income household but have met their fair share of discrimination over the years, with Bethany bearing the brunt of the stigma of interabled marriage.

“Time flies when you’re having fun!” she posted. “Someone once said to Tyson that he was brave ‘for taking me on,’ to which he replied it was quite the reverse, that I was the one who was brave for ‘taking *him* on!’ Honestly, we’re both brave for taking on marriage, commitment, and its odds.

“Yes, interabled marriage can be complicated. But I can attest to the fact that it is rich, varied, textured, and deep. I am in total anticipation for the next 23 years.”

Speaking to The Epoch Times, Bethany who taught for nearly 20 years as a university lecturer marveled at the milestones she and Tyson have reached—from newlyweds, to young professionals, to parents—claiming that all hardships have led to where they are today.

“Around middle school age, I recall thinking that life would be easier to handle without disability because teenage angst was clearly enough,” said Bethany. “I think as I grew and matured, that original concept developed into a better understanding that the hardest part about a disabled lifestyle is the pointless inaccessibility and cultural beliefs that clash with social idealistic views of physicality, and who has permission to go where (and when) they want.”

To cope, Bethany adopted a “where there’s a will, there’s a way” attitude. Stresses arise when her desires clash with what she’s capable of physically. Yet one thing that has always made sense to Bethany is her connection with Tyson.

Regaling their first encounter, Bethany says that they met through a family friend one summer, at the university where Bethany was earning her Master’s in Communication Studies and teaching a freshman seminar. After being introduced on the sidewalk, Bethany “discreetly” mentioned her office hours.

The next morning, there were flowers on her desk.

The two of them began going out until Tyson, the then-director of a fine arts department, returned to St. Croix. They tried to keep in touch but were eventually separated by circumstances.

However, when Tyson returned the following summer to co-teach a piano tuning course, they bumped into one another and their romance was rekindled. Tyson took a job nearby.

“We have been together ever since,” said Bethany. “I claim we decided to tie the knot about a month or two into seeing one another, he claims he knew he would marry me the day we met on the sidewalk!”

The Hoppes began married life in a tiny apartment in a rough neighborhood in Austin, Texas. Bethany supported Tyson through his Master’s in Music Education, and they moved house three times over the next two decades before settling in Washington, D.C.

Most marital disputes were “normal,” said Bethany: “little things like toothpaste caps, to big things like child discipline.” Yet when it came to parenting their adoptive daughter, the mom of two believes the biggest hurdles were presented not by each other, but by other parents.

“Tyson and I had distinctly different social experiences in those years,” she reflected. “I had the impression that being obviously disabled, handling a positive relationship and marriage, showing up and doing everything everyone else was doing, was off-putting or threatening to most of the women I encountered.”

Bethany’s dreams of having a “mom squad” and circle of friends were dashed, which impacted not only her self-esteem, but her social circle, parenting, and marriage. She also had to battle more medical issues than a nondisabled partner—including a year of treatment for a huge staghorn kidney stone in her solitary kidney. Bethany was getting monthly lithotripsy treatments at Cleveland Clinic, which meant they were driving from Austin to Cleveland on a monthly basis.

Meanwhile, Bethany has always been a rock to Tyson when he suffered injuries and minor surgery of his own.

“‘In sickness and in health’ is a serious vow in an interabled marriage,” Bethany reflected, “but not an impossible one, and definitely not a deal-breaker. Communication and appreciation of one another is paramount.”

Bethany is adamant that thinking the able-bodied partner in a relationship must be the “caretaker” is an inaccurate assumption; hers and Tyson’s is a marriage of equality, and their family philosophy, “Hoppe’s Never Quit,” exemplifies their stance.

She also adds: “To be equitable…we’ve taken each other on.”

Bethany says, “It doesn’t matter if we’re in the middle of a proverbial lake covered in fog; just keep rowing, do not drop the oars!”

“Women with disabilities are contributing, viable, dynamic women,” she added. “We know how to navigate, we constantly adapt, we are interested in how we fit into the American tableau, we have the same goals as every other woman … what physically holds us back, we make up for in intellect, spirit, and love.”