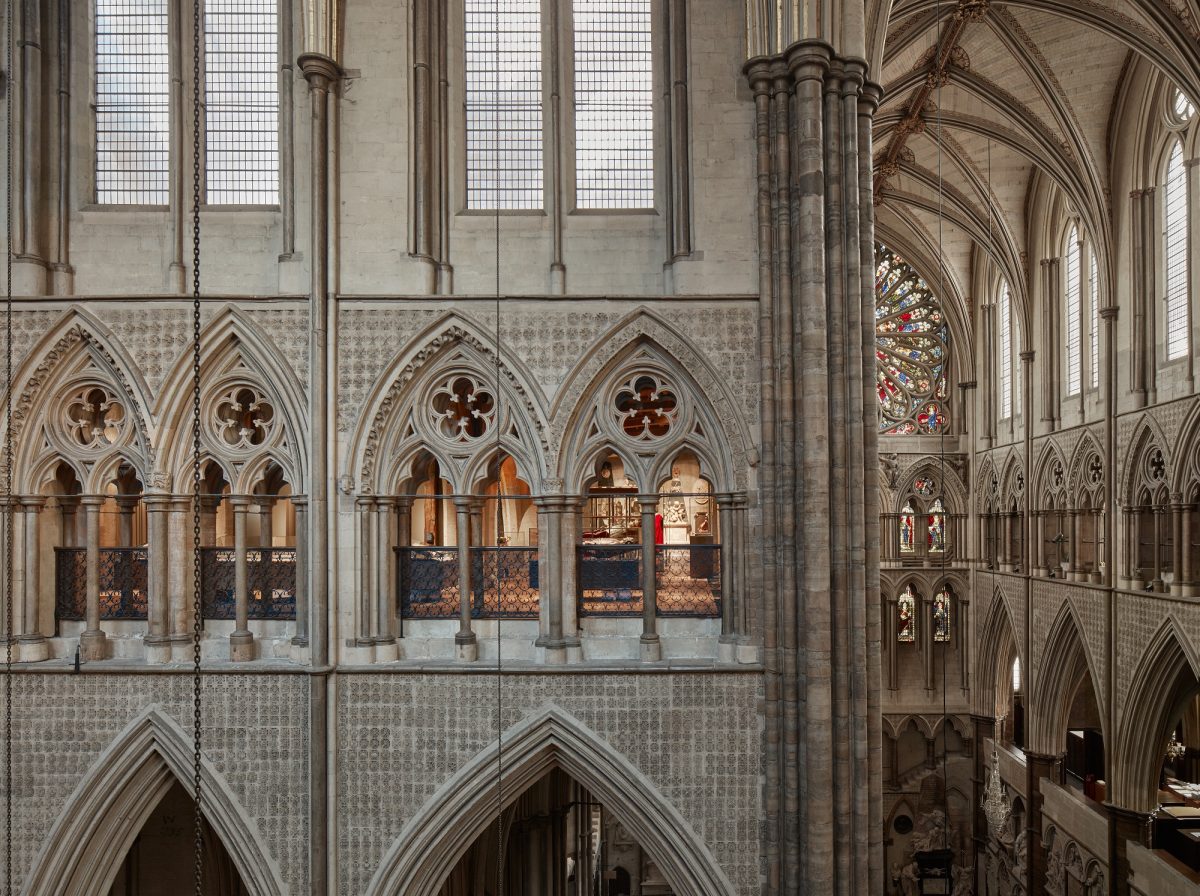 Westminster Abbey Opens Its Storage Room With a View

A British national treasure is revealing more of itself.

The hallowed ground of Westminster Abbey holds a unique place in British history, where coronations occur and the fallen and the famous rest and are remembered: namely the Grave of the Unknown Warrior honoring all those who died in military conflict, with memorials to William Shakespeare, Sir Winston Churchill, William Blake, the Bronte sisters, and Jane Austen, and Rudyard Kipling. Charles Dickens, Sir Isaac Newton, and George Frederic Handel are all buried there, to name a few. It’s the site of every English sovereign’s coronation since William the Conqueror of 1066.

With such a familiar landmark, perhaps like an old friend, we may think we know it inside and out. But London’s Westminster Abbey has been keeping a large part of itself hidden.

Hidden high in the abbey, 52 feet up to be precise, is a space that for centuries was just used for storage. Storing what, we can only imagine. This secret space has been kept from public view for 700 years.

It’s a room with a view deemed “the best in Europe,” no less, by Poet Laureate Sir John Betjeman. This view, which was once seen only by the stained-glass angels, the statues of saints, and the occasional BBC cameraman, perhaps filming a royal wedding, is now open to the public, as of June 11.

The storage space in question is the mid-13th century triforium, a space above the nave arcade of the church which extends over the side aisles. It was built in the time of Henry III, around 1245, and thought to have been the start of an additional set of chapels which never eventuated.

Within this space, visitors can now see 300 treasures, which have been dusted and displayed; some being shown for the first time. The treasures are divided into four themes depicting the life of the abbey through different aspects of its more than thousand-year history: The building of Westminster Abbey; worship and daily life, the Westminster Abbey and the monarchy, and the abbey and the national memory.

The triforium’s treasures range from traditional gems of a grand, regal scale, such as the coronation chair (1689) of Queen Mary II, a saddle owned by King Henry V, to a quaint 1742 guidebook for children called “The Gigantick History of Westminster Abbey.”  And then there’s the rather weird and wonderful life-size wax funeral effigies.There’s even a stuffed parrot. All the items invite you to wonder about the thousand or more years of life in the abbey.

Five Treasures of the Trove

The abbey was founded as a Benedictine monastery in 960 and then rebuilt in 1065 by Edward the Confessor, the Anglo-Saxon king and saint. The majority of the abbey’s architecture is in the gothic style, built by King Henry III in 1245. As such, it is one of the most important gothic buildings in England.

The abbey is outside the jurisdiction of the Church of England. It’s neither a cathedral nor a parish church, as it reports directly to the monarch. It is called a “Royal Peculiar” and was deemed so by Queen Elizabeth I in 1560. There are daily services at the abbey.

Visitors can reach these new Queen’s Diamond Jubilee Galleries via a new tower, the Weston Tower, which is the first addition to the fabric of the building since 1745.

Lorraine Ferrier
Follow
Lorraine Ferrier writes about fine arts and craftsmanship for The Epoch Times. She focuses on artists and artisans, primarily in North America and Europe, who imbue their works with beauty and traditional values. She's especially interested in giving a voice to the rare and lesser-known arts and crafts, in the hope that we can preserve our traditional art heritage. She lives and writes in a London suburb, in England.
SHARE
Friends Read FreeCopyFacebookTweet
SHARE
Friends Read FreeCopyFacebookTweet
You May Also Like