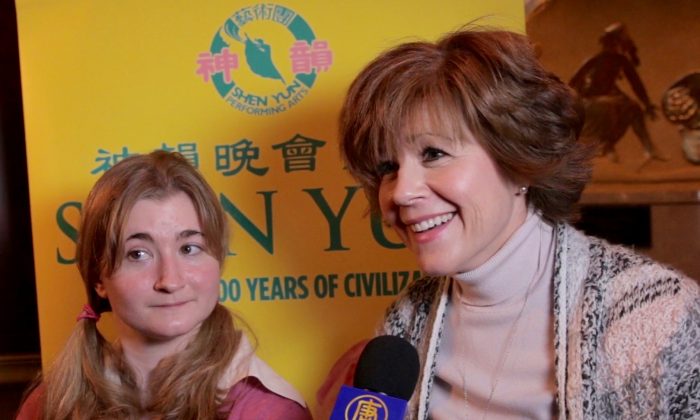 Laura Albee and her daughter

WATERBURY, Conn.—Attending a performance by Shen Yun Performing Arts is a beautiful birthday gift that a mother gave her daughter on Valentine’s Day. Seeing the performance together for the second year in a row, a mother-daughter duo felt connected emotionally and spiritually to the dancers.

Taylor’s mother, Laura Albee, who studied ballet and modern dance for 16 years, believes there is a lot you can learn from dance. “So this is a gift I wanted to give my daughter,” she said.

Ms. Albee appreciates how self-expression through dance can connect mind, body, and soul. She felt traditional Chinese culture brought a sense of peace and serenity. Ms. Albee and her daughter attended the performance at the Palace Theater on Sunday afternoon, Feb. 14.

Classical Chinese dance is at the center of every Shen Yun performance. The dancers perform each theatrical piece with rich emotion, steeped in traditional culture. This complete dance system was passed down over thousands of years, so many cultural traditions are expressed through the movements and postures.

And the world-class dancers capture the personalities and emotions of the characters portrayed through uniquely Chinese aesthetics. Theatergoers like Ms. Albee and her daughter come back to see the show again, not just to see the dancing but also to experience the total package.

“The costumes and the dancing and the way it was just put together is phenomenal,” Tracy said. She could tell that this year’s performance was different and appreciated the stories behind the dances.

Her mother agreed, saying that the dances this year were an expansion of the story that was told before. “It’s like watching the timeline of ancient culture through the past and how it evolves,” she said.

Some of the stories that unfolds on stage are based on myths and legends from China’s traditional 5,000-year history. Many stories had been documented over the centuries providing Shen Yun with a multitude of inspirations for brand new shows each year.

The vibrant costumes were inspired by the attire of royal courts and ethnic minorities from several dynasties. But to make the show complete, Shen Yun adds an orchestra and digital backdrop.

Each mini act is synchronized with East meets West music and a moving background that depicts scenes such as flying Buddhas and fairies or beautiful mountains and seas.

“It’s fluid, their use of space [and] musicality,” Ms. Albee said.

The whole combination really touched Tracy. “It’s really hard not to get emotional,” she said.