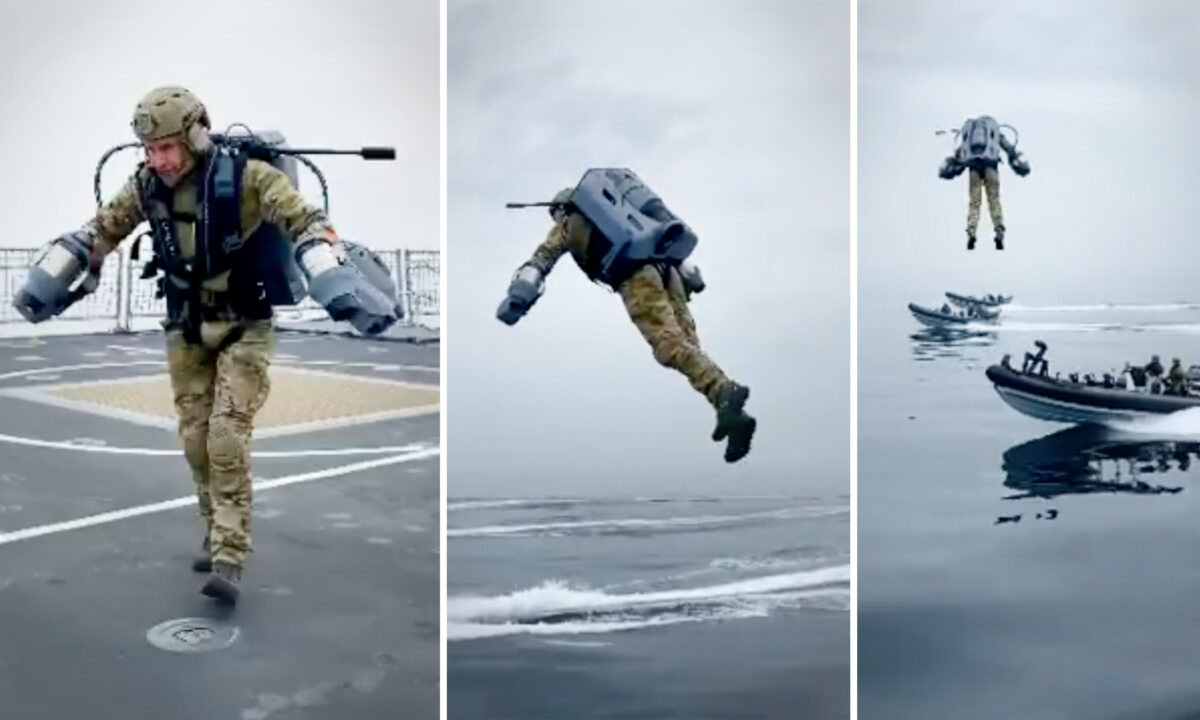 Armed with a wild idea and a team willing to help make it reality, a former British Royal Marine has launched an actual flying jet suit that is now being trialed by the Royal Navy. Jaw-dropping footage of a test run at sea shows just how real this technology has become.

Richard Browning, chief test pilot and co-founder of Gravity Industries, told The Epoch Times that his jet suit from Gravity “has been used by the Royal Marines for maritime boarding” and “getting friendly forces onto the deck of a hostage or captured vessel.”

“I hatched this seemingly crazy idea: could you connect together human balance and human strength, add a bit of horsepower, and re-imagine human flight in that way?” he added. “It did start out as that humble, ‘what if?’ sort of experiment.”

The Royal Marines in August 2021 shared footage of an exercise where Browning piloted the jet suit from the landing pad of naval ship HMS TMR to a rigid inflatable boat traveling at 15 knots. He lands facing backwards, and then maneuvers back to the deck where he launched from.

The impressive footage has over 20 million views to date.

“The experience is a bit like that feeling you get when you have a dream of flying,” Browning said. “It really is super exhilarating. You feel completely free, you can go wherever you like; it’s just a blissful kind of experience of complete freedom.”

The jet suit employs micro gas turbines—”little jet engines,” Browning calls them—with two on each arm and one on the back, small versions of what propel fighter jets or civil aircraft expelling just enough air to lift a pilot off the ground.

The suit is controlled by thrust vectoring, “in other words, pointing your arms down to go up, [or] out to the side and you sink down,” said Browning, who added that using the suit is just as intuitive as surfing, skiing, or riding a bike. He credits his team for building the suit in its entirety, most of which is 3D printed.

As for viewers of the video who might question it’s authenticity, Browning is adamant.

“We have never, ever done any [digital manipulation], because as soon as you do that, why bother getting out of bed in the morning?” he said. “You might as well just fake it all. We’ve never faked anything.”

Gravity Industries was formed in 2017 in the UK; Browning, who was an oil trader with British Petroleum for 16 years, has a background in aviation and engineering but was hungry for a challenge.

It wasn’t all smooth sailing, though. Browning’s team experienced numerous falls and fails in the development of the jet suit, but embraced failure as part of innovation. Two things that remain consistent at Gravity are keeping safety at the forefront, and always getting back on the proverbial horse to try again.

“We fly only as high as we would reluctantly accept falling from,” said Browning, now based in Los Angeles. “We fall over quite a lot, but no one’s ever hurt themselves … it’s as dangerous as you want to use it; you can be very stupid with it, or you can be very sensible with it, and we choose the latter.”

The innovator credits his six years in the British Royal Marines for Gravity’s successful connection with eight different militaries from across the world. Four years since the company’s inception, Gravity is debt-free, has held 145 events in 35 countries—plus over 500 in Los Angeles—has countless brand deals, and does everything from training to military search and rescue.

Many of the 500 people the company has trained to use the jet suit are paramedics and military personnel.

“No one else knows how to do this,” said Browning. “We’re the people who develop the equipment. You get rigged up with that climbing rope to stop you falling over, and then you just learn the balance on very low power. Some people pick it up in a day, other people take a couple more days, but usually within a week we’ve got people flying.”

He added that he had “no purpose” when he developed the flight suit; it was simply for the ” joy of the challenge.”

“Who knew? When you have a crazy idea, sometimes you can turn it into something that has a whole raft of practical applications,” he added. “It continues to be a pretty crazy exploration into how you use a brand-new technology.”