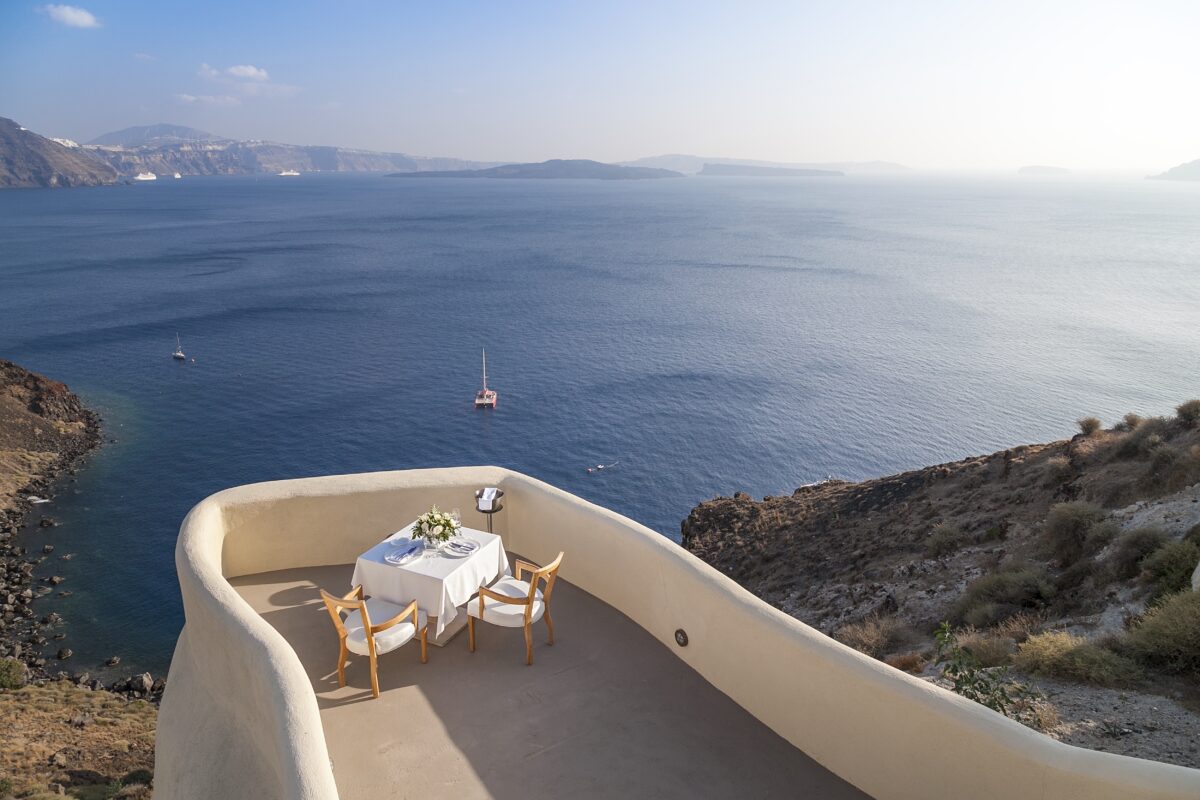 The island of Santorini, famed for its sunsets, hides an ancient secret in lava and ash: wine
BY Tim Johnson TIMEJune 8, 2022 PRINT

It doesn’t matter where you go on this small island, you’ll find a feast for the eyes, like the clusters of white buildings that cling to the edge of plunging black cliffs, or the fire and fury of the ancient volcano, its remnants still steaming out in the middle of the caldera.

You can walk on black beaches and swim at red ones, and dine on octopus at small restaurants in Fira, Santorini’s capital, your table just inches from a sheer drop. And at the end of the day, you will probably gather with the masses to revel in the late-day glow of the waning sun, a ball of fire ever redder as it drops to the sea past the blue-domed roofs of Oia.

Looking at the arid soil and rough terrain, there’s one thing that you’d never expect possible: growing grapes. These are not the lush, verdant benches of Napa or the gracious, gently rolling hills of Bordeaux. Still, 40 grape varieties are grown here. Some are unusual or even unique to this island, where spring and summer bring almost no rain and the soil bakes under the Mediterranean sun, causing the vines to dig deep into the mineral-rich soil.

There’s really no place in the world like Santorini. Set in the southern reaches of the Cyclades, a Greek island chain in the Aegean Sea, most of its recorded history was unalterably shaped by a single event—what’s known as the Minoan eruption, around the year 1620 BC. One of the most powerful volcanic events in history, its violence split the larger, unitary island into a series of smaller ones, creating an archipelago, with the middle, the caldera, filling up with the sea.

You can get a glimpse of life on Santorini before Thera’s eruption at Akrotiri, an archaeological site on the southern end of the island. Lesser known than but similar to Pompeii (predating it by 1,700 years), the site showcases a busy, sophisticated, wealthy Bronze Age city that gained wealth through international trade. Now, it’s frozen in time by a catastrophic event.

“Here, they lived like kings and pharaohs,” said a guide as they led me through the site, which winds through a passage past stone houses that had as many as 30 rooms, with walls adorned with paintings.

One thing the volcano created is a really interesting place to grow grapes that will eventually become wine. While grape cultivation predated the eruption—vines arrived with Phoenician sailors and traders, and this is one of the oldest wine-growing regions on Earth—it’s the aftermath of that cataclysmic event that still affects what they put in bottles today.

While harsh, the soil here is mineral-rich, containing lava, volcanic ash, and pumice stone. The vines were never affected by phylloxera, an insect that wiped out most of Europe’s vineyards in the 19th century. Their roots plunge more than 100 feet below the hard crust of the ground. On the surface, they’re pruned carefully into “koulouras,” baskets that protect the vines from strong winds, baking summer sun, the whip of volcanic sand, and the generally harsh environment. By necessity, grapes are always handpicked.

All these elements come together to create varietal grapes that taste like those grown nowhere else. For thousands of years, almost all the wine on Santorini stayed on the island and was consumed locally. The first modern winery opened in 1948, and in 1971, the island finally secured protected designation of origin (PDO) status.

On a recent visit, I arrived at Estate Argyros, in the center of Santorini, on a rare rainy day. I found a stylish tasting room, all decked out in white, including the walls, chairs, and bar.

I was greeted by Eliana, who hosted me for a tasting. “You should feel very lucky, very special,” she said, noting the exceptional nature of the weather, and that they only get a few dozen truly rainy days each year.

The tasting included several varietals, including Assyrtiko, the wine and grape most readily identified with Santorini. While it’s grown in a few other places, it is indigenous and thrives on this island.

“It smells like a wet stone, like a rainy day,” Eliana noted. She added that some of the first wine production here took place in caves, dug deep into the soil, and that Argyros, founded in 1903 as a family winery, is one of the largest vineyards in Santorini, with 1,300 acres; some of its vines date back more than 200 years. Despite the high alcohol content—14.5%—the Assyrtiko drinks easily and is mineral-forward but crisp with a citrus finish. “I call it the balcony wine, perfect with light food, under the sun,” said Eliana.

That’s how the day ended. Delivering that trademark Santorini sun, the skies cleared in the late afternoon.

Next, I arrived at Santo Wines, where the tables are spread right to the side of the cliff.

A waiter brought out a broad spectrum of reds, whites, and rosés, including Vinsanto, another island favorite, which is a sweet wine that looks red but is produced from overripe white grapes.

Sitting there, it was hard to imagine all that volcanic fire and fury, an eruption huge enough to tear apart an island. That night, the sun dropped into the caldera, casting long rays that warmed the sea into a pool of gold, and all those white buildings perched atop the towering cliffs turned to burnt orange.

Fly: Seasonal flights from various European capitals service the small Santorini Airport, so in the warmer months, you can fly directly from Paris, Vienna, Madrid, and other major cities. Or, if you pass through Athens en route, several daily flights make the short hop.

Stay: In Oia, at the north end of the island, the rooms at Mystique Hotel (Mystique.gr) are dug into the side of the caldera. Each has a sweeping, spectacular view, as well as its own plunge pool or hot tub. And at Vedema (Marriott.com), you’ll find a series of villas and suites in a medieval village that includes two spectacular pools and is built around a 400-year-old wine cellar. Each is a Luxury Collection Resort.

Getting Around: This can be a challenge on the crowded island roads. Taxis tend to be pricey, so you’re best navigating the local bus system, or book ahead with a transportation service. Or, even better, rent a four-wheel ATV to traverse all the small paths and back lanes.

Take Note: The easiest way to see and taste at several wineries in a single day might be a wine tour, which runs about three hours and includes at least three wineries. Here’s one to check out: WineTourSantorini.com.