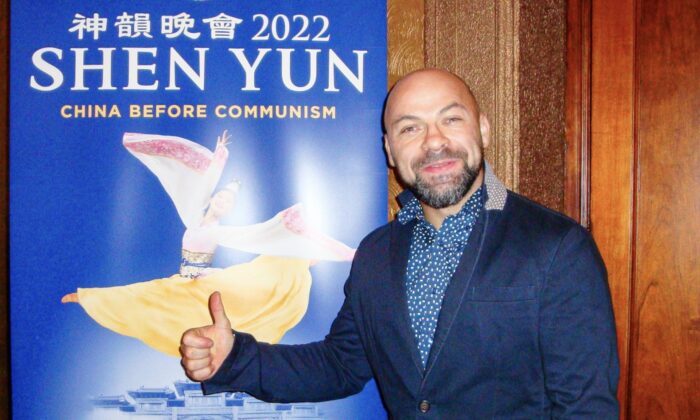 MELBOURNE, Australia—Dmitrijs Cernagovs, a technical director, was looking forward to seeing Shen Yun on April 25—and what he experienced after watching the performance at Melbourne’s Palais Theatre left a lasting impression on him.

“At some point, you were feeling emotional,” Mr. Cernagovs said.

Mr. Cernagovs has been involved in making visual effects for many blockbusters such as “Fast and Furious: Hobbs & Shaw,” “Avengers: Endgame” and “Shang-Chi and the Legend of the Ten Rings.” He was inspired by the colours of the costumes, and the emotions expressed by the performers.

This was Mr. Cernagovs’s first time seeing Shen Yun, and while was not familiar with Chinese culture he said that the performance helped him learn more about China and its history.

He also praised the coordination of the performances and said he enjoyed how the story unfolded in many performances—including a piece in which the performers used cooking tools and towels.

Shen Yun has a unique orchestra, which combines both Western and Chinese musical instruments, producing beautiful melodies that have inspired countless audience members across the world.

Mr. Cernagovs was particularly impressed by the erhu, an ancient two-string Chinese musical instrument with thousands of years of history, saying that it was memorable for him.

Shen Yun’s mission is to revive traditional Chinese culture, which was said by ancient Chinese people to be “divinely inspired.”

For 5,000 years, China was a place where harmony between heaven, earth, and humankind was the central belief of society. China was known as the “The Land of the Divine.”

However, this culture was almost destroyed by communism, according to Shen Yun’s website.

Mr. Cernagovs was moved when he learned of Shen Yun’s mission.

“I think what they are trying to do is deliver the Chinese culture to the rest of the world because it’s very rich, very colourful. I think it’s very emotional. I found it very emotional,” he said.

Over the past couple of years, Mr. Cernagovs has studied Buddhism, which allowed him to further understand the spirituality of the Chinese culture presented in Shen Yun.

He added that it was surprising to learn that Chinese people were traditionally very spiritual—unlike in today’s modern China.

“I think what they are trying to do is deliver the Chinese culture to the rest of the world because it’s very rich, very colourful—I found it very emotional,” he said.

Summing up his Shen Yun experience in a few words he said “Phenomenal, emotional, and I would say colourful.”