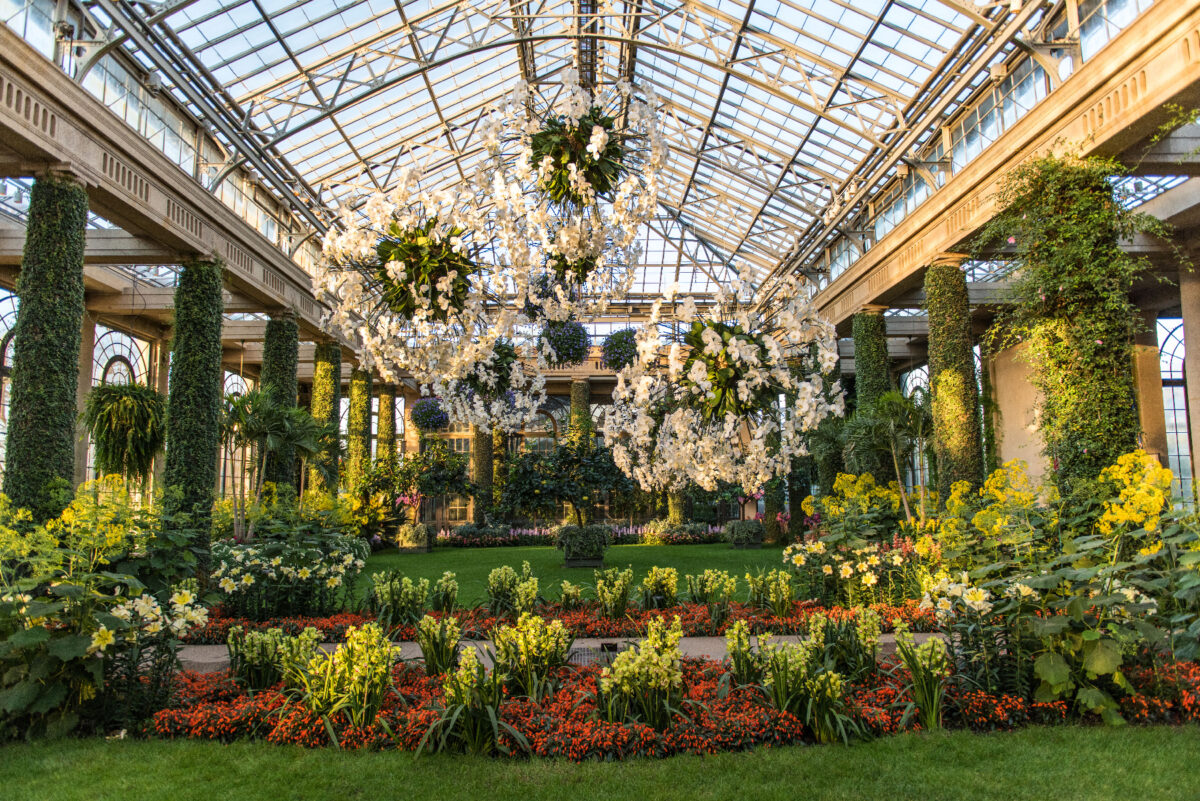 Longwood Gardens in Wilmington, Delaware, created by the du Pont family, is one of the premier botanical destinations in the United States. (Photo courtesy of Harold Hank.)
Travel

Visit the du Ponts and More in Wilmington

The contrast between members of the du Pont family who settled in Wilmington, Delaware, and the surrounding Brandywine Valley at the turn of the 19th century and those who toiled in the powder mills they founded is one of numerous diversities that characterize the destination.

Some members of the family lived in a 175-room mansion set amid 1,000 acres of magnificent gardens. Others resided in a chateau modeled after the palace where Marie Antoinette hung out. People who worked for that affluent American dynasty had more modest quarters. They included houses that today provide accommodations for visitors to the area.

The primary reason the area is a tourist magnet relates to the saga of the du Ponts. The tale began in 1800, when Pierre Samuel du Pont, the son of a Parisian watchmaker, immigrated to the United States, where one of his sons established a gunpowder mill near Wilmington. The company became the world’s largest manufacturer of black powder and created one of the wealthiest family empires in the country.

A good place to begin exploring the area is where the story started. The Hagley Museum and Library features the restored original gunpowder mills, the Eleutherian Mills estate where five generations of du Ponts resided, historic gardens and orchard, and the hillside village where workers lived. The residence is packed with antique furnishings and valuable art. It’s also home to the second-largest museum collection of original patent models, topped only by the Smithsonian in Washington, D.C.

In the powder yards strung out along the Brandywine River visitors can view historic mill buildings that include a working 19th-century machine shop, along with the wooden Birkenhead waterwheel and a coal-fired steam engine. They also learn about the process of manufacturing gunpowder.

Workers’ Hill provides a glimpse of the lives of original mill employees. It includes a foreman’s home, a Sunday school for children, and a garden where factory families grew vegetables. The modest plots contrast with the elaborate ornamental plantings at du Pont homes.

The 77-room Nemours Estate was constructed by Alfred I. du Pont, the great-great-grandson of Pierre, for his second wife, Alicia. It was modeled after a chateau that was built during the reign of French King Louis XV and occupied by Queen Marie Antoinette. The setting is enhanced by acres of formal gardens, greenhouses, and a planted maze area.

The 175-room du Pont mansion, known as Winterthur, displays a collection of more than 90,000 antiques in stunning interiors. The house is situated in forests and rolling hills that provide a backdrop for gardens that present a year-round explosion of color. More than 1,000 acres of outdoor plantings and a 4-acre indoor conservatory make Longwood Gardens one of the premier botanical destinations in the world. A popular feature is spectacular displays of illuminated fountains. Technicolor streams of water rise and fall, spin and twirl in a precisely choreographed show.

As enticing as the du Pont story is, it represents only a small part of what awaits visitors to the area. For example, the Brandywine Valley inspired generations of Wyeth family artists. The Brandywine River Museum is renowned for its collection of works by N.C., Andrew, and Jamie Wyeth. The houses and studios where N.C. and Andrew lived and painted are open to the public.

The region also boasts intriguing chapters of American history. The John Dickinson Plantation was the home of one of the country’s Founding Fathers. He penned the phrase “United we stand, divided we fall” and was a drafter of the U.S. Constitution.

Fort Delaware on colorfully named Pea Patch Island was built in 1815 to protect the Wilmington and Philadelphia harbors, destroyed by fire and rebuilt prior to the Civil War. It served as a prisoner-of-war camp and held some 12,500 Confederate soldiers who were captured at Gettysburg.

Another story relates to the role of African Americans. Cultural achievements of Delaware-born African Americans are recalled at the Delaware History Museum. The segment of the Underground Railroad that ran through the state includes sites associated with Harriet Tubman, Quaker abolitionists, and others who risked much to provide assistance. A moving statue of Tubman looks out over the Tubman-Garrett Riverfront Park, which is named for her and fellow abolitionist Thomas Garrett.

The Wilmington Riverfront attracts people who stop to read the historical plaques, strollers and joggers, and others drawn by the selection of places to eat. Nearby a sign at the dock from which the small ferry boat departs to Fort Delaware reads “Prepare to enter the past.” That comment applies equally to much that awaits visitors to Wilmington and the Brandywine Valley.

For more information about Wilmington and the Brandywine Valley: 800-489-6664 or VisitWilmingtonDE.com