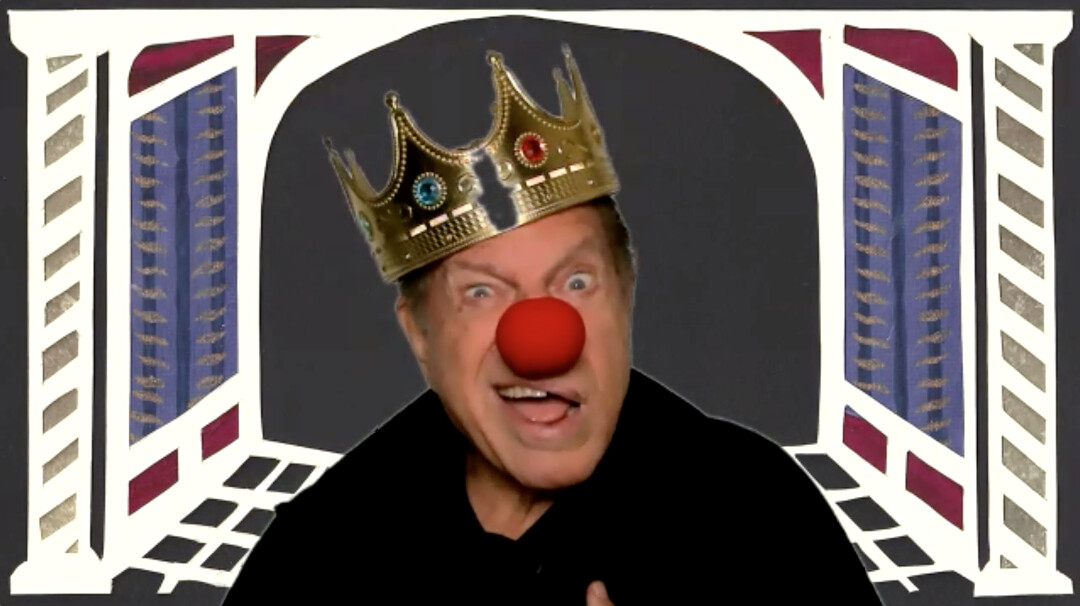 The one essential of any theatrical production is its telling a good story. Doing exactly that, and succeeding wonderfully at it, is the Congress for Jewish Culture’s all-new dramatization of Itzik Manger’s 1965 production, “Megillah Cycle”; it’s now available for streaming.

Billed as a modernist take on the traditional Purim play, it recounts a tale of deliverance for the Jewish people. This tale “of heroes and villains, of sorrows and glory,” takes place in a land ruled by King Ahasuerus (Mike Burstyn), a drunken fool.

For all of his faults, Ahasuerus knows the value of having friends in the right places. So when Jewish merchant Mordkhe the Wise (Allen Lewis Rickman) informs the king of an assassination plot, Mordkhe is handsomely rewarded—the king gives him a palace soft drink and dry goods concession.

Mordkhe’s good fortune, however, doesn’t please Haman (Avi Hoffman), a troublemaker and member of the king’s inner circle. Haman uses his position to push through a series of anti-Jewish laws and takes steps to ensure that Jews are blamed for acts of violence being committed in the kingdom—crimes actually committed by Haman’s thugs.

Haman also uses the press to sway public opinion to his cause. The local newspaper editor eagerly publishes anything Haman provides, whether true or not.

Yet Haman’s abuse of his royal influence might turn out to be his undoing. During a drunken party, Haman convinces Ahasuerus to publicly humiliate his own wife, Queen Vashti (Eleanor Reissa), who refuses to submit to the king’s commands. As a result, the enraged monarch sends her to the gallows.

As Ahasuerus now requires a new wife, Mordkhe quickly volunteers his beautiful niece, Esther (Yelena Shmulenson). Mordkhe hopes that as queen, she can be the voice of reason against Haman, and help save her people.

Burstyn’s adaptation nicely combines elements of the tongue in cheek, the lyrical, and the deadly serious. Many sequences contain Shakespeare-esque elements: An older king is oblivious to the consequences of his actions (“King Lear”), a schemer plans to ruin those who stand in his way (“Othello”), and a woman—in this case Haman’s wife (Suzanne Toren)—is more devious than her husband (“Macbeth”).

The work also explores the concepts of upholding one’s dignity and doing what’s best for the greater good—even at the expense of one’s own happiness. Esther faces these challenges when she is forced to give up the man she loves (Daniel Kahn) to assume the mantle of queen.

Another interesting question, as seen via a debate among the village tailors, concerns the issue of whether one should submit to another when one’s life is in the other’s hands. There’s also the all-too-familiar situation of immigrants—a term used in the play—being used as scapegoats by an entrenched ruling class.

In addition to filling his role as King Ahasuerus, Burstyn is the production’s director. He guides what is essentially a bare-bones video presentation with a sure—but not overly heavy—hand. Rather, he is content to let the work speak for itself while allowing those watching to draw their own parallels between the play and the present day.

The various actors all do well in their roles, but it’s the work itself that is the star.

The only time things stumble slightly is when one character receives a final comeuppance. The plot that leads to this character’s fate is explained fully, but never actually shown. Seeing it happen, instead of simply being told about it, would be much more emotionally satisfying.

Containing themes that resonate today, “Megillah Cycle” offers up a powerful story, well worth the time.

The story was adapted by Mike Burstyn, who appeared on Broadway in a 1965 musical version, and is presented as part of the Congress’ International Virtual Yiddish Theater series. The work is performed in Yiddish, with English subtitles provided by Shane Baker and English commentary by Joe Darion.

Performing Arts
Online Theater Review: ‘Meet Me in St. Louis’: A Holiday Special in Song and on Screen

Performing Arts
What Does It Mean to Be a ‘Vessel’ for Music?