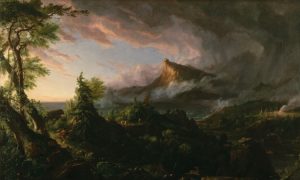 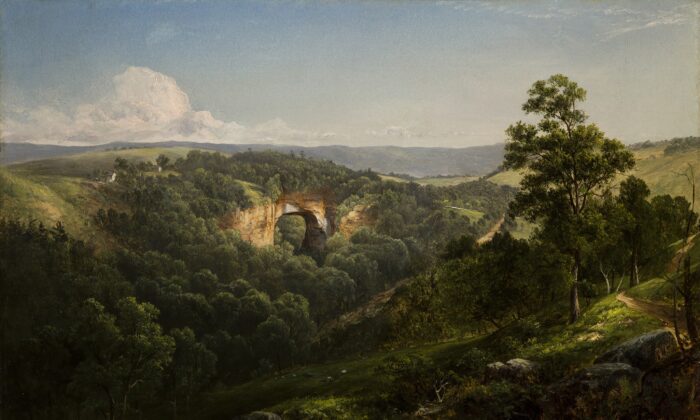 ‘Virginia Arcadia’ at the Virginia Museum of Fine Arts

What’s 215 feet high, 90 feet long, and has been admired in great art and literature for centuries—from Thomas Jefferson’s “Notes on the State of Virginia” to Herman Melville’s “Moby-Dick” to Frederic Edwin Church’s landscape paintings?

Here’s another hint: Jefferson bought it, along with 157 acres of land, from King George III of England for 20 shillings in 1774. And he owned it until he died.

The answer is Virginia’s Natural Bridge, a naturally occurring arch over 400 million years old that geologists believe was once the roof of an underground river cave.

The Natural Bridge is one of the most frequently depicted sites in 19th-century American landscape painting, according to Christopher C. Oliver, the assistant curator of American art at the Virginia Museum of Fine Arts. Oliver mentioned the fact as part of an impassioned online opening talk for the museum’s new exhibition, “Virginia Arcadia: The Natural Bridge in American Art,” which he curated.

The exhibition explores the phenomenon of the Natural Bridge as seen in 60 paintings, prints, photographs, and decorative art objects from 1775 to the early 1900s. It’s important to note that the site is a significant cultural, historical landmark for the Monacan nation, of the Eastern Siouan people, who long predate European and colonial connections with the Natural Bridge.

Oliver titled the exhibition “Virginia Arcadia” because the Arcadian vision is so prominent in 18th- and 19th-century American as well European landscape painting, he says.

Thomas Jefferson described the Natural Bridge as “the most sublime of Nature’s works” in his “Notes on the State of Virginia.”

He added: “It is impossible for the emotions, arising from the sublime, to be felt beyond what they are here: so beautiful an arch, so elevated, so light, and springing, as it were, up to heaven, the rapture of the Spectator is really indescribable!”

In his Monticello home, Jefferson hung two paintings of the Natural Bridge by Virginia artist David Roberts (which had been gifted to him when he was president) beside artwork depicting another great American icon: Niagara Falls. “Jefferson, as we explore in this exhibition, becomes really the first and major proponent not only of the Natural Bridge, but sets its importance by rhetorically pairing it with Niagara Falls,” Oliver says.

To display how Jefferson placed the Natural Bridge and Niagara Falls artworks together at Monticello, the exhibition created a copy of a pediment window on the wall next to the paintings where they likely hung. The window was a prominent feature of the dining room.

Also included in the exhibition, which further illustrates Jefferson’s love for the Natural Bridge, is an unusual portrait of Jefferson. It’s unusual because rather than being portrayed in the more formal setting seen in his peers’ portraits, Jefferson is depicted in nature with the Natural Bridge in the background, Oliver explains.

The portrait was put on display in the New York City Shakespeare Gallery, just days after Jefferson’s inauguration in 1801.

In the portrait, self-taught artist Caleb Boyle painted Jefferson almost as “a gentleman farmer type figure, erudite, though, in his appreciation of the landscape, here in the kind of hinterlands of the nation, in the wilderness of Virginia at the Natural Bridge,” Oliver says.

Romance of the Hudson River School

“The rise of American landscape painters that we so frequently call the Hudson River School, which has a firm basis in the tradition of English Romantic painting, really rises shortly after Jefferson’s death [in 1835],” Oliver says.

“Church was following the mold of his mentor Thomas Cole, in that kind of subtle combination of landscape and history: That is, a painting could be a representation of contemporary landscape but also about American history,” Oliver says.

In Church’s Natural Bridge painting, two figures are slightly off to the center-right: A lady sits perched on a rock listening intently to a man, who is telling an animated tale.

The man is Patrick Henry, the first caretaker of the Natural Bridge, a former slave who purchased his own freedom and whom Jefferson employed. In the painting, he throws his hand skyward, and we might think he’s merely pointing out the bridge. But Oliver believes he’s pointing to the Western Trail that’s hinted at by a small fence, which Church painted on the arch. The Great Wagon Road, constructed between 1720 and 1763, took travelers near the Natural Bridge.

Oliver recounts how Church painted the color of the Natural Bridge accurately. Church’s traveling companion and patron, Cyrus West Field, offered Church a selection of rocks he’d collected from the Natural Bridge site. He thought Church might find them useful to color match the Natural Bridge when painting the scene back in his New York studio. Church declined. He’d made a series of sketches onsite, some of which are in the exhibition; he’d used a number system to color code the scene, with entries such as “5—rich orange rust.”

Another second-generation Hudson River School artist was David Johnson. His painting of the Natural Bridge is also featured in the exhibition. Johnson was a luminist, focusing on detailed paintings with an emphasis on light and ensuring that the brushwork was concealed.

Two examples in the exhibition are known as “paired views,” where the artist would paint a wide-angle composition of a landscape and then paint another view that focuses on a particular detail.

A Whale of an American Icon

As for the Natural Bridge mentioned in Melville’s “Moby-Dick,” Oliver, in the exhibition’s opening presentation, brings the excitement of the first whale hunt to life as he reads Melville’s words:

“But soon the fore part of him slowly rose from the water; for an instant his whole marbleized body formed a high arch, like Virginia’s Natural Bridge …”

Oliver explains that Melville was aware, as all writers are, of the “visual currency” of iconic images. And across the globe, in Europe and in the United States, people would have understood Melville’s reference, he says.

The Virginia Museum of Fine Arts exhibition “Virginia Arcadia: The Natural Bridge in American Art,” runs until Aug. 1. To find out more about paintings of the Natural Bridge, visit VMFA.museum