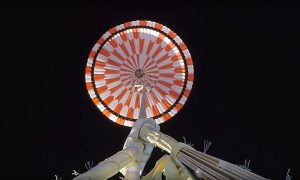 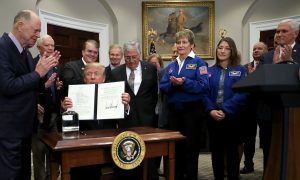 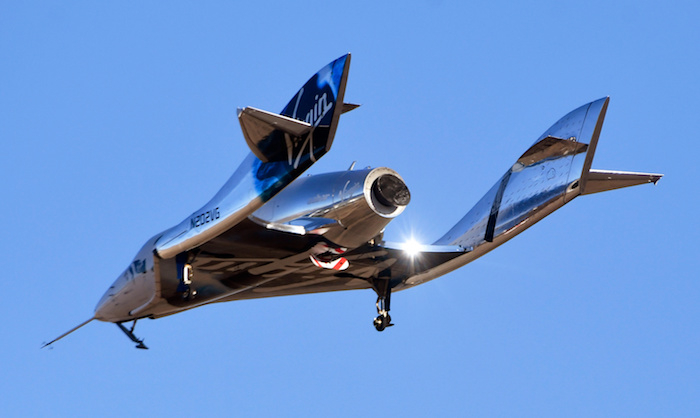 The successful test flight presages a new era of civilian space travel that could kick off as soon as next year, with Richard Branson’s Virgin Galactic battling billionaire-backed ventures such as Amazon.com Inc. founder Jeff Bezos’ Blue Origin, to be the first to offer suborbital flights to fare-paying tourists.

Branson, who said he personally put up $1 billion toward the roughly $1.3 billion development costs for Virgin’s space businesses, told Reuters he viewed competition with Bezos and others as a race, though passenger safety was the top priority.

“Today we get to enjoy the fact that we have put people into space before anybody else,” Branson said.

British billionaire Branson, wearing jeans and a leather bomber jacket with a fur collar, attended the take-off along with hundreds of spectators on a crisp morning in the California desert.

After the rocket plane, also called the VSS Unity, reached an apogee of 51.4 miles above Earth, a crying Branson hugged his son and high-fived and hugged other spectators. The plane reentered the atmosphere at 2.5 times the speed of sound and landed a few minutes later to cheers and applause, concluding roughly an hour’s journey.

One of the pilots handed Branson a small Earth stress ball when the two hugged.

The test flight—the fourth mission during which VSS Unity flew under its own power—had pilots Mark Stucky and Frederick Sturckow onboard, four NASA research payloads, and a mannequin named Annie as a stand-in passenger.

The next flight test is within the next couple of months, depending on data analysis from the flight, Virgin Galactic said. Branson has said Virgin’s first commercial space trip with him onboard would happen “in months and not years.”

The carrier airplane hauled the SpaceShipTwo passenger rocket plane to an altitude of about 45,000 feet and released it. Seconds later, SpaceShipTwo fired, catapulting it to more than 51 miles above Earth, high enough for the pilots to experience weightlessness and see the curvature of the planet.

The ship’s rocket igniting and vertical ascent through a cloudless sky could be seen from the ground.

Virgin’s latest flight test comes four years after the original SpaceShipTwo crashed during a test flight that killed the co-pilot and seriously injured the pilot, dealing a major setback to Virgin Galactic, a U.S. offshoot of the London-based Virgin Group.

“It’s been 14 long years to get here,” Branson told reporters after the landmark flight. “We’ve had tears, real tears, and we’ve had moments of joy. So the tears today were tears of joy.”

Nearly 700 people have paid or put down deposits to fly aboard Virgin’s suborbital missions, including actor Leonardo DiCaprio and pop star Justin Bieber. A 90-minute flight costs $250,000. Virgin Galactic has received about $80 million in deposits from future astronauts, Branson said.

Short sightseeing trips to space aboard Blue Origin’s New Shepard rocket are likely to cost around $200,000 to $300,000, at least to start, Reuters reported in July. Tickets will be offered ahead of the first commercial launch, and test flights with Blue Origin employees are expected to begin in 2019.

Branson added that he “would be delighted to offer Bezos a flight on Virgin” and for Bezos “to maybe offer me a flight” on New Shepard.

Bezos’ New Shepard has already flown to the internationally recognized boundary between Earth’s atmosphere and outer space known as the Karman line at 62 miles—though the Blue Origin trip did not carry humans.

Virgin’s launch did not go as high as the Karman line. Its pilots were aiming to soar 50 miles into the sky, which is the U.S. military and NASA’s definition of the edge of space and high enough to earn commercial astronaut wings by the U.S. Federal Aviation Administration.

In September, SpaceX said Japanese billionaire Yusaku Maezawa, founder and chief executive of online fashion retailer Zozo, would be the company’s first passenger on a voyage around the moon on its forthcoming Big Falcon Rocket spaceship, tentatively scheduled for 2023.

Musk, the billionaire CEO of electric carmaker Tesla Inc., said the Big Falcon Rocket could conduct its first orbital flights in two to three years as part of his grand plan to shuttle passengers to the moon and eventually fly humans and cargo to Mars.

Looking to the future after the successful flight, Branson talked about the possibility of using his space plane to link international cities, offering orbital space flights, or potentially even building a Virgin hotel in space.

“One thing leads onto another. I forever dream,” he told Reuters. “Actually, I said to my son today, we were sitting in the cockpit (before the flight), and I said sometimes I think life is just one incredible dream.”