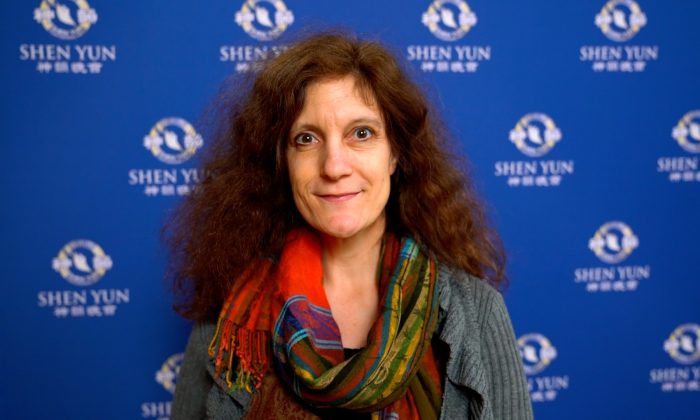 NEW YORK—With an orchestra that combines both Chinese and Western instruments, New York-based Shen Yun Performing Arts presents music that draws from the best of both cultures.

The unique orchestral blend stood out to violinist, violist, and faculty member at The Juiliard School pre-college, Sophie Arbuckle, who described the music as beautiful.

Arbuckle said the sounds produced by the orchestra helped her to understand the meaning behind China’s 5,000-year culture.

“It really brings out the language of the culture, and it brings the personality or the life of that particular culture,” she said.

Arbuckle has performed as a violin soloist with the Sudbury Symphony in Canada, as well as with the Belgorade Orchestra in France. As the violist of the Braude Ensemble, she has played in a number of prestigious venues in Europe, including in Belgium and France.

The violinist is also artistic co-director at JVNY, a string ensemble of young musicians who perform on both sides of the Atlantic. The organization also mentors and develops its young musicians by providing programs and training.

Shen Yun’s orchestra plays all original compositions that highlight Chinese instruments, as they lead the melody on top of the Western orchestral base. Classical Chinese music focuses on expressing inner feelings through individual instruments, whereas Western music emphasizes the overall effect of a musical ensemble. Thus by combining these two approaches, the orchestra is able to create a refreshingly distinct yet harmonious sound.

Arbuckle said the orchestration was exquisite and beautifully done.

“I thought it was interesting that the languages of … the East and West … coming together.”

She said the entire production was spectacular and spoke to her in its own language, creating a unique experience.

“It feels very light to me … it’s very buoyant, the opposite of heaviness.”

The musician appreciated the amount of energy it takes to put together a performance like this.

“There is a certain … striving for some type of perfection that is kind of spectacular,” she said.

As to the message she received from the performance, Arbuckle said it was about spreading goodness.

“We’re living in some funny times and we need more of that good energy and good thoughts.”

With reporting by NTD Television and Cathy He.