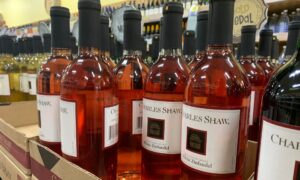 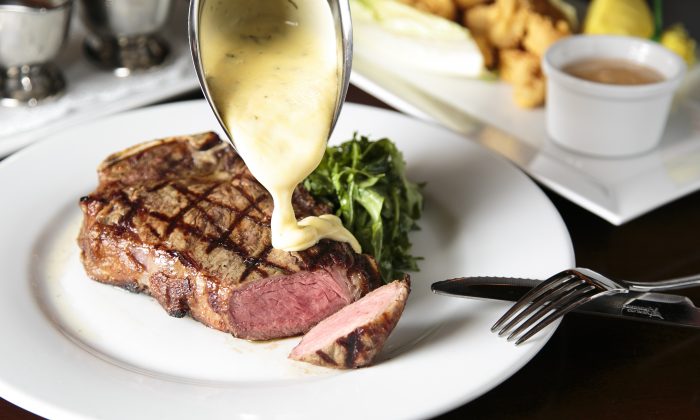 Steakhouses have been popping up all over the city in the past few months. But a new ship has pulled into port in the West Village—a neighborhood not known for catering to the carnivorous set.

A first Manhattan foray for co-owners Paul Singh and Akbar “Mike” Himani (who own Aged, in Forest Hills), Village Prime channels a rustic chic feel. A mosaic of cowhide on the wall, banquettes, touches of walnut wood throughout, and dim lighting casting a candlelight glow give the space a warm, inviting feel.

The classic cuts are all there—porterhouse, New York strip, filet mignon—along with potato in its myriad forms. Let me count the ways … whipped, baked, au gratin, grated into hash browns, or cut into steak fries.

More than enough, in other words, to fulfill those cravings for meat and potatoes.

For purists, the tender USDA Prime steaks measure up quite solidly. They come with the option of sauces like hollandaise, chimichurri, peppercorn, béarnaise, or housemade steak sauce. And should you want a Parmesan or blue cheese crust, just say the word.

But the real star here, any cravings for steak aside, is the seafood.

Executive chef Rory O’Farrell, who most recently opened Johnny Sánchez restaurants for celebrity chefs Aarón Sánchez and John Besh across the country, seems to have an innate touch with seafood. Across the board, all the seafood dishes I tried were full of flavor and deftly executed.

Just among starters alone, the New England Clam Chowder won the approval of my discerning Rhode Islander dining companion, as the best he’d yet found in the city. Finely textured, the chowder packed tons of flavor ($12).

The Lobster Bisque, in a departure from the classic sherry-enriched rendition, hits a sweet nutty, almost hazelnut-like note. The secret ingredient? Vanilla, to bring out the sweetness of the lobster meat ($14).

Baked Clams are also done well, juicy and plump underneath a crispy panko crust ($17), and the Fried Calamari, beckoningly crispy and served with a smoked pepper aioli with a bold kick ($14).

For a salad, try the Wedge Salad. It hits just the right notes with iceberg lettuce, blue cheese, and smoked bacon ($12). It’s great for a light appetizer but will undeniably rouse your taste buds. The Tomato Basil Burrata, with aged balsamic, is notable for its creamy oozy heart, but it’s probably best to wait for summer for peak-of-season tomatoes ($16).

With Chilean sea bass, O’Farrell gives the buttery fish a golden crust, and then treats it like meat by adding a red-wine Worcestershire reduction, and serves it with mashed potatoes and greens. I ordered the dish somewhat hesitantly, but the fish and reduction worked quite well together. The textures throughout the dish range from  melting to creamy to crunchy—it’s a delight ($36).

The sides abound in potatoes, but for a touch of luxury, get the Lobster Mac & Cheese. It’s just the right amount of lobster, neither too much nor too little ($16).

If by the end of the meal, you have room left, try the Crème Brûlée ($10). Yes, it’s a standard, but here it may well set a record for the longest crème brûlée. It looks like a long ship with a lacy caramel sail. The dish is only just wide enough to fit the width of a dessert spoon.

Doesn’t everyone eat crème brûlée along the edge of the usual round ramekin, leaving a lonely island in the middle? Problem solved with this design. It’s all edge. It’s perfect for two. You can start from opposite ends and make a race for the middle as I did, or more graciously take your time to savor it.

There’s an extensive global wine list, but take note of the collection of single malts, including bottles of limited edition Talisker, and other notables like the 30-year Highland Park.

A garden seating 30 is to open this spring.

Specials include two-course lunch special starting at $14, and a $30 prix-fixe brunch with unlimited champagne.