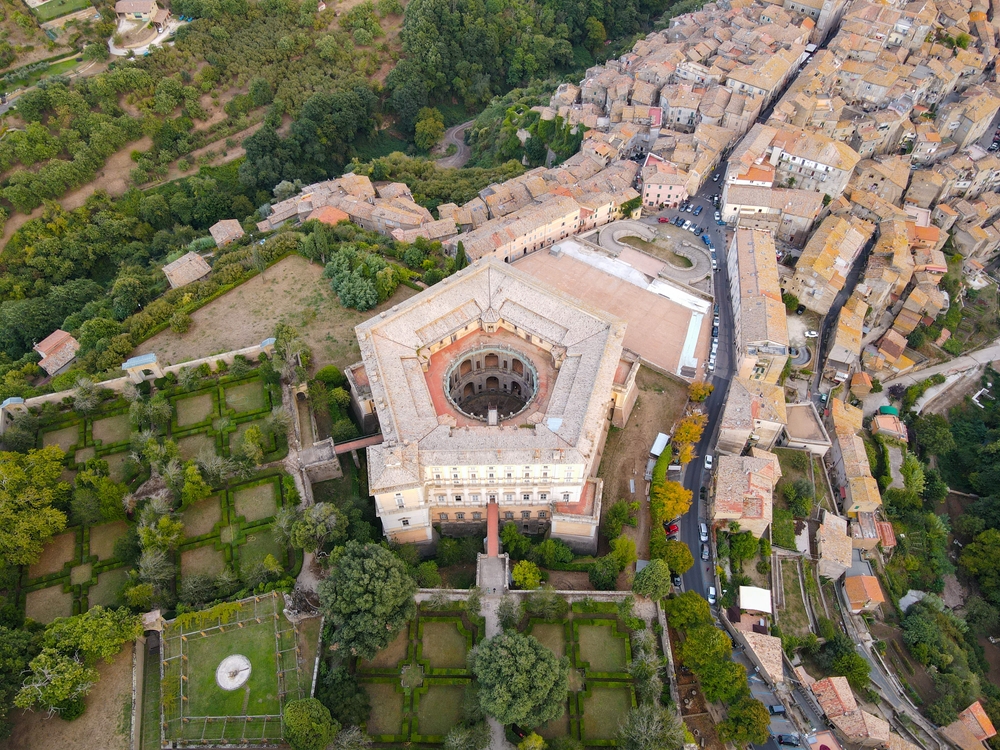 The main road leads to the pentagonal Villa Farnese. The circular courtyard can be seen within and the drawbridges lead across the moat to the parterre renaissance gardens on the left. Parterre gardens are characterized by geometrically formed hedges designed to be viewed from the building. (AerialDronePics/Shutterstock)
Arts & Tradition

Villa Farnese: A Safe Haven With a Secret Garden

Larger than life: Art that inspires us through the ages
BY James H Smith TIMEApril 25, 2022 PRINT

In 1504, future pope Cardinal Alessandro Farnese established the site in Caprarola, Italy, which is 50 miles northwest from Rome. A fortified castle was planned to defend against the threat of invasion, but the fortifications were never completed. After lying dormant until the mid-16th century, the site was given new life by Alessandro’s grandson.

When the family lost favor with a change in the papacy, the site was reimagined as a garden villa retreat, just far enough from Rome to offer some peace.

The late Renaissance architect Giacomo da Vignola had previously worked on significant projects in Rome, including St. Peter’s Basilica, and he was chosen for the project.

The villa’s platform is carved out from the crest of a volcanic range high over the town. The main road ascends to an elaborate entry that starts with a curved double staircase that leads to a forecourt and then to another double staircase before arriving at the main entrance.

A pentagonal exterior façade and cylindrical inner courtyard define the building. The Villa has five floors, with the main rooms on the lower floors opening into a courtyard. Apartments for the Farnese family are situated on the middle floors, overlooking the courtyard. They offer a direct entry to the gardens at the rear.

The gardens offer a respite from the fort-like villa and are accessed from the apartments by two drawbridges that cross a rear moat. The gardens continue the symmetry of the rear facades in a renaissance style that’s inspired by the classical ideals of order and beauty. A path leads from these gardens along the crest to the “giardino segreto,” or secret garden, and a large garden summerhouse known as the casino.