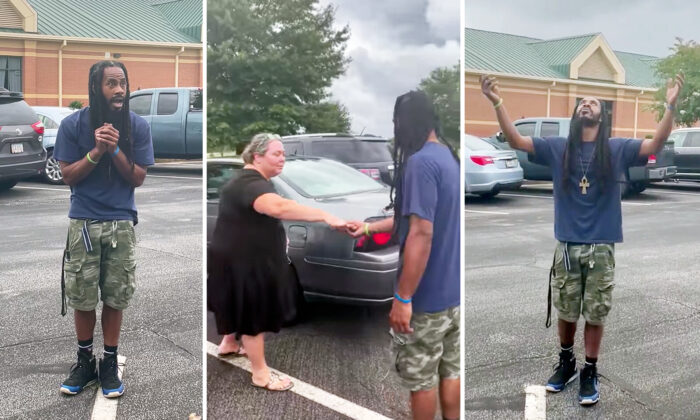 Video: Teachers Chip In to Buy Car for Beloved Custodian Who Walks an Hour to School

A beloved school custodian who was forced to walk an hour to work for lack of a car couldn’t believe when faculty chipped in to buy him one.

“Today was one of those days that makes you smile for hours,” staffers posted on Facebook. “Through the generosity of our staff, we have been able to bless our head custodian, Mr. Chris, in his time of need.”

Two teachers, Ms. Jodi Combs and Ms. MacDonald, have previously helped Jackson with issues relating to housing and utilities. When they found out he desperately needed a car, but didn’t have savings enough to buy one, they went the extra mile.

Jackson had already raised $1,500 by himself; within minutes of posting a call to arms on social media, a collection effort had raised enough money to buy a secondhand Chevrolet Impala.

The best part is Combs and MacDonald didn’t know at the time that this is Jackson’s favorite model.

“He no longer has to walk to work!” staffers exclaimed on Facebook, adding, “Unity Grove is a special place, and we are so grateful for the people who are in our lives.”

The joyful footage of Jackson and his car quickly went viral, amassing millions of views.

Footage shows Jackson approaching the car in the school parking lot before Combs places the keys in his hand and steps back, instructing, “It’s yours, baby … we love you!”

Jackson raises his hands to the sky and exclaims, “Oh my stars, there is a God! What they say about people is not real! I never would have dreamt of something like this.”

Jackson’s need was great. Claiming his hour-long walk to work was quicker than the bus route, he often opted for his own two legs to get him to school on time. However, he almost ran out of steam after running into financial trouble over the summer, reported 11 Alive.

Unity Grove teachers and students, who love their helpful, hardworking custodian, knew he needed to catch a break and wanted to make it happen. Claiming there has “never been a day where he has not come in with a smile on his face,” Combs fronted the effort without hesitation, according to the report.

“He was completely, completely stunned,” she told 11 Alive. “Kindness is a big thing at our school, it’s something we try to instill in our kids. It’s just who we are.”