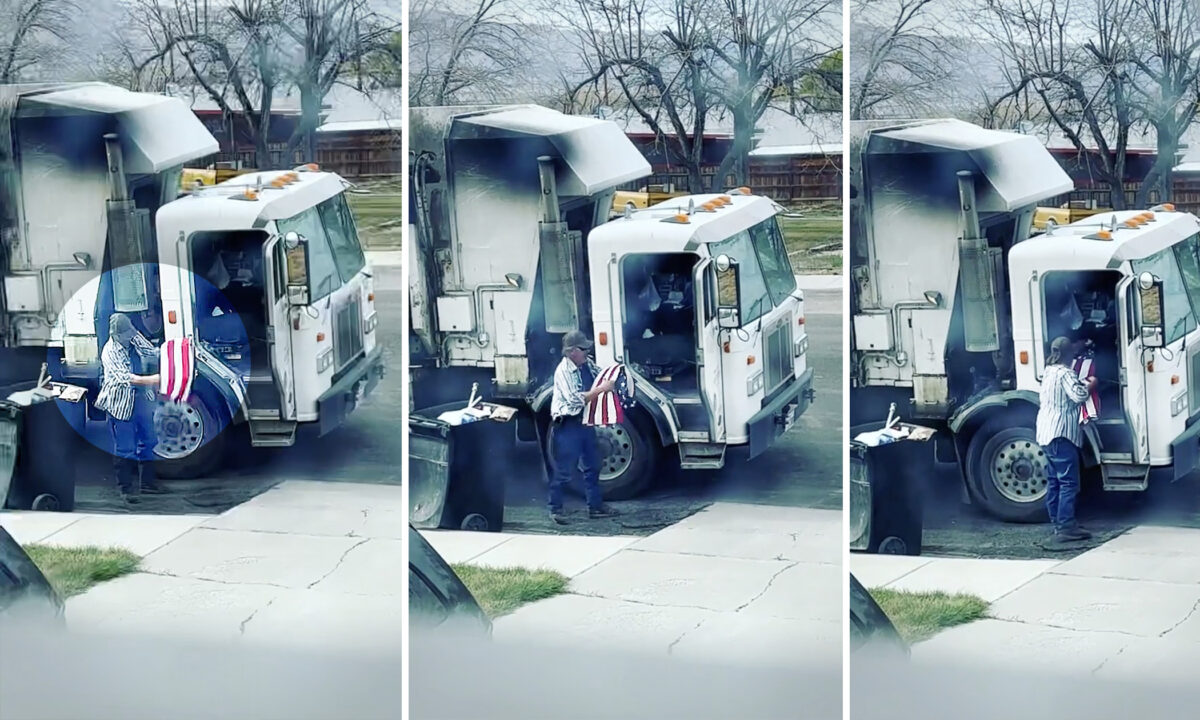 VIDEO: Patriotic Garbage Collector Sees Flag in Trash, Rescues, Folds It ‘When Nobody Else Was Watching’

A Utah garbage collector who once served in the U.S. Marine Corps was caught on camera rescuing an American flag from the trash, to fold it and treat it with the honor it deserves.

Mom of two Brooke Cowley, 35, didn’t know Huntington sanitation worker Don Gardner before witnessing his patriotic act. But thinking the sight was a “good teaching moment” for her family, she soon got to know him.

“It was April 19,” Brooke told The Epoch Times. “The night or the weekend before that we had a severe windstorm. It actually destroyed our shed on the side of our house, and it spilled some of our garbage, and that’s when it broke our flag.”

She added, “I was cleaning up our yard and trying to pick up all of the debris, and I picked up the flag and the pole, wasn’t thinking, and threw it in the trash.”

After coming home from school, Brooke’s children began their homework at the dinner table; Don’s activity on the street outside their house piqued their interest.

“They asked what the garbage man was doing,” said Brooke. “I looked out the window and he had gotten out of his garbage truck, he was taking our flag off of the flagpole, and then he started to fold it.

“It took him over 10 minutes to fold that flag. He did something that he didn’t have to do, and he did it when [he thought] nobody else was watching.”

Brooke’s shock and embarrassment turned to admiration when she realized what Don was doing. The former Marine, who’s collected trash in Emery County for 11 years, was retiring the flag in honorable fashion. Tossing the flag was a mistake, she admits, so she filmed his dutiful act to share on social media as a lesson for others.

“It was an accident that I threw it in the trash, because my husband is a veteran; he actually has spoken at flag retirement ceremonies, so I know how to properly retire the flag,” Brooke said. “I just was not thinking in that moment when I was cleaning everything up.”

Touched, Brooke’s kids wanted to repay the patriotic garbage man. Online, they ordered him a “challenge coin” — a popular collectors’ item among veterans.

“Military people collect these if they go over to different countries or different troops,” Brooke explained. “The coin we got him, on one side it says, ‘Thank you for your service,’ and on the other side it says, ‘Your country salutes you.’”

Brooke’s kids presented him the coin and a handwritten thank-you card. They also apologized for their honest mistake. Don understood.

“He did say he knew it was a mistake for us, but he said a lot of people don’t make that mistake, they just throw it away and trash the flag and it makes him really mad,” Brooke said.

Don told Fox News, “I took an oath once to defend this country and our flag, and I still do.”

He has volunteered to retire any discarded flags on his route, and advises others: old flags can be properly burned, buried, or recycled by the American Legion or Boy and Girl Scout groups in flag retirement ceremonies.

Since sharing her run-in with her dutiful sanitation worker on Facebook, Brooke was contacted by both veterans and patriots who acknowledged her admitting her mistake. Don also got the recognition he deserves.

“A lot of people, especially military members, have reached out,” Brooke said. “It’s been really nice to see how he’s touched a lot of lives because of what he’s done.

“He did it just out of respect for our flag; what he’s done for our nation, he should be respected for that … it really touched our family.”