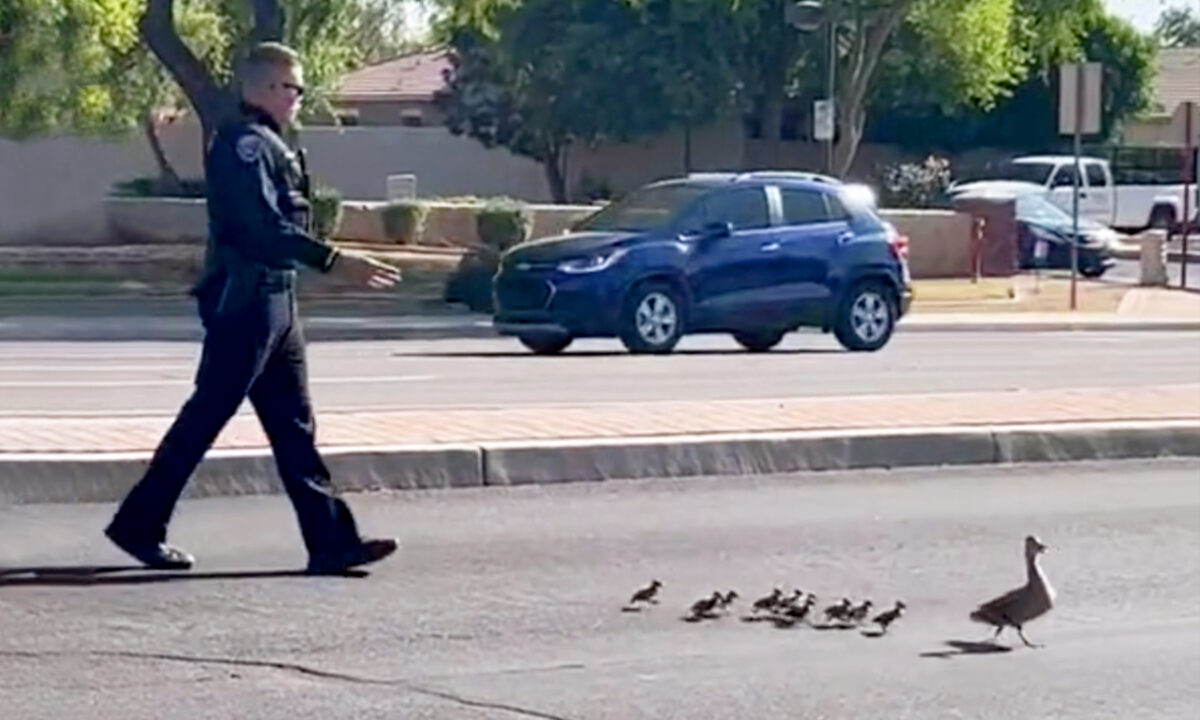 A kind police officer who herded a mother duck and her ducklings safely across a busy road has touched the hearts of his Arizona community.

California-born Casey Walag, 41, a full-time realtor from Chandler, Arizona, captured the “VIP style” escort on film. She was driving down Riggs Road to collect her 3- and 5-year-old girls from preschool when she saw a mother duck pacing back and forth in the median. Almost a dozen baby ducklings were huddled beneath her in the turn lane, jumping to no avail.

“They were too small and could not get up,” Casey told The Epoch Times. “I thought, in that moment, either another car is going to run all of these baby ducklings over, or they are going to swerve around them and cause a major accident. I also knew I couldn’t stop and help, because it was a major six-lane road.”

Casey called her husband in a panic, who told her to dial 911. She pulled over to the side of the road and prayed she wouldn’t have to witness an accident. An officer arrived within minutes, “which seemed like forever,” said Casey.

“At first he drove by slowly, then he saw the mama and ducklings in the middle of the road, turned on his lights, and circled around to block traffic … got out, and started to corral the ducklings down the turn lane so they could walk around the median,” she recalled.

The officer, who has not been identified, “shuffled back and forth” until all ducklings were reunited with their mother and could cross the street.

“The way the officer stopped traffic, and walked waving his hand guiding the ducks across the street, looked like a security guard walking with a celebrity guiding them to their destination, VIP style!” she said.

“Many drivers slowed, rolled their windows down, and yelled, ‘Thank you!’ to the officer. It was really great to see so many people happy about saving the ducks,” said Casey.

Casey originally recorded the scene to share with her husband. She then posted the video on some neighborhood social media pages as a warning to others to slow down for ducks, but when the clip gained traction, she shared it on TikTok.

“A handful of people said some negative things, but I guess that’s to be expected because there’s always those in the crowd,” she told The Epoch Times. “Most loved it! Many praised the officer and thanked him; some people wanted him to rescue them, and were really positive.”

There are many water sites and ducks in her part of Chandler, said Casey. But since the ducklings are so fragile, it “takes a community” to help them make it to adult life. “It’s amazing to see how protective the mama ducks are of their ducklings,” she said.

“I was overjoyed! Seeing all those little duck feet cross the road and the mama walking proud with her ducklings to safety was the best feeling,” Casey said, praising the kindly officer for saving the adorable family.