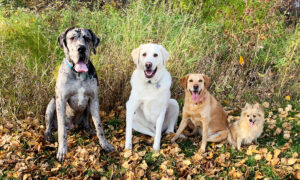 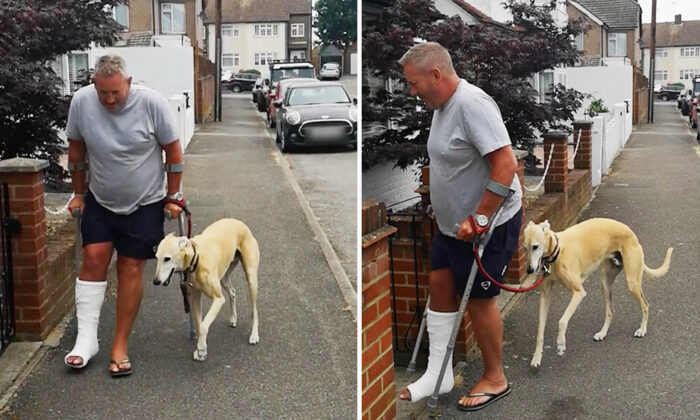 A married couple in the UK became suspicious of their dog Billy when, one day, he seemed to develop a limp in his front paw.

What made Russell and Michelle Jones, from London, even more suspect was that it happened right after Russell had broken his own ankle coming down from a ledge.

The next day, Mr. Jones was limping around the house, and saw that Billy suddenly had a limp, too, as he told ITV’s “This Morning” in an interview.

Billy’s limping became a spectacle when he was later video-recorded limping beside his owner, who is seen using crutches, wearing a plaster cast, as they made their way down a sidewalk.

That odd and adorable video was posted on Facebook where it went viral.

Russell speculated his dog was empathizing with his injured owner by sharing some of his injury on his behalf.

In his Facebook post, he captioned, “Cost me £300 in vet fees and X-rays, nothing wrong just sympathy. Love him ❤️”

That viral post eventually attracted the attention from the producers of ITV, and the couple, along with Billy, found themselves on network TV.

On the show, the Joneses revealed more video footage of Billy suspiciously sprinting on the grass without his limp in the absence of his human dad.

Whether an act of love and sympathy, or just copying, Billy limping was an uplifting sight for his injured owner—and certainly for everyone else!