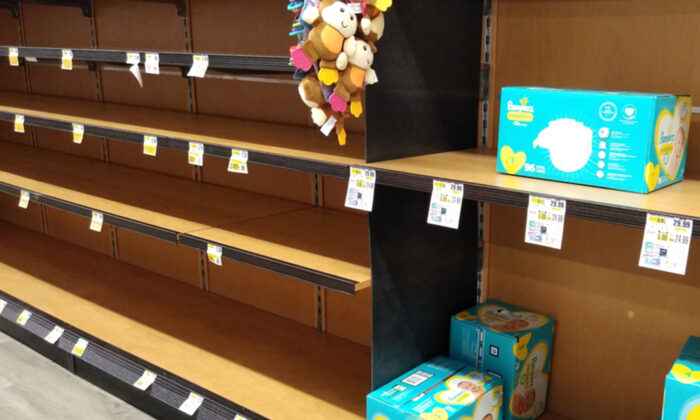 A video of a woman in tears in a grocery store, unable to find diapers for her toddler amid the Chinese Communist Party (CCP) virus pandemic, went viral on TikTok. In the short clip, she explained how, unlike many others, she wasn’t in a financial position to stockpile. The video, along with its strong message, went viral on the social media platform, with many users showing compassion and offering to help.

Lauren Whitney posted the viral TikTok video while she was out trying to find diapers for her child. “To all you crazy people going out and buying all the diapers. How am I supposed to diaper my child?” she said in the clip, as she suddenly burst into tears. “If I can’t afford to buy 20 at a time as you can?”

This raised a very relevant point: while many people panic-buy during such uncertain times, there are others just like her who can’t possibly afford the same luxury. And leaving the stores empty of essentials puts them in a precarious position.

Her clip came with a fitting hashtag, #thisapocalypsesucks, and got 917,700 likes since it was posted on March 15. In a later video posted on the same account, the young mother went into more detail as to the reasons she published the first clip. She said that she intended to raise awareness of the situation she and others are facing during the CCP virus crisis. She explained that while her family was struggling with money, they weren’t “destitute.”

However, she had been demoted at work. “So I am sort of emotional, to begin with. My emotions run kinda high, and I kinda wear my heart on my sleeve,” she added.

While out shopping a couple of days after posting the first video, Whitney managed to find two boxes of diapers in her toddler’s size. As a way to show how she can lead by example, the young woman filmed herself only purchasing one of them, while leaving the second one for “someone else.”

Now that is indeed worthy of admiration.

As for the amount of attention her video received, Whitney expressed not only her surprise but also remarked how unprepared she was for the vast number of comments she got. “I don’t know how to handle going viral. I’m so grateful, for all of the followers, all of the likes,” she added in another video.

The viral clip of the young woman in tears did not only get an immense number of likes but also attracted over 15,000 comments. There were a minority of users saying her crying was an overreaction. However, most people who commented showed compassion towards her plight, and others even offered to help her out.

One comment suggested that “stores should have a limit on how many you can buy.”

While another recalled a personal experience, “I cried in the store at 3 am because the diapers, wipes, AND baby food were all gone. We can’t let the babies suffer.”

And one particular poignant comment read, “Send this woman some diapers and baby supplies. People need to stop acting like this is the apocalypse. You’re the one making this into a crisis.”