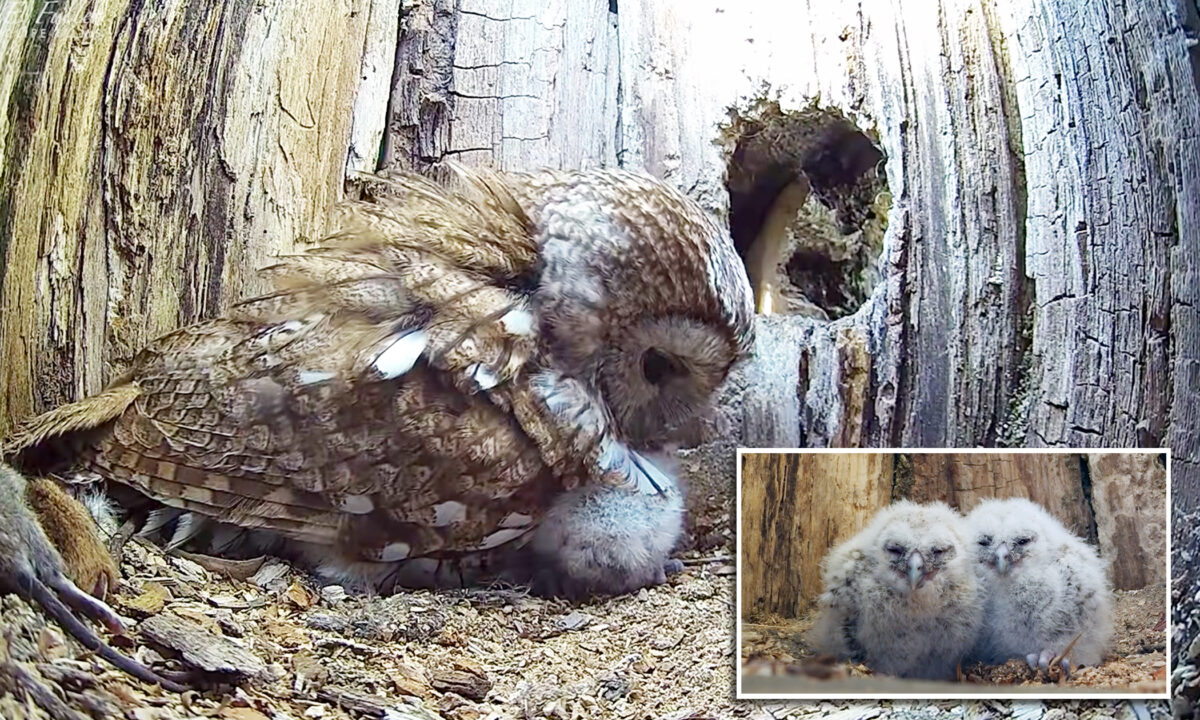 A mother owl, whose own eggs failed to hatch, has delighted her rescuer by instantly adopting a pair of orphaned, wild owlets who fell from their nest.

Wildlife artist and filmmaker Robert E. Fuller, from North Yorkshire, England, has been the caretaker of tawny owl pair Luna and Bomber for several years.

“Bomber has lived in my garden since 2011, and Luna is actually a rescued tawny owl, raised by wild owls here after I placed her into their nest in 2017,” Fuller said. “Sadly, this owl couple have been unlucky in raising chicks of their own.”

Fuller said that Luna’s eggs failed to hatch last year, and the same happened this year. Luna laid three eggs in the middle of March, which were due to hatch in mid-April, but they did not.

Fuller has paired orphaned, wild owlets with Luna and Bomber before and has been successful, so when he heard of two chicks that had fallen from a haystack, and the haystack had been moved, he decided to see if Luna would adopt them.

“When Luna returned to the nest and found the foster owlets there, she rushed straight up to them and instantly put her wings over them, trying to brood,” Fuller said. “It was as though she had been expecting them! It was incredible to watch.”

Relieved, Fuller kept hidden cameras recording inside the owls’ tree hollow to monitor Luna and her adopted babies. Incredible, intimate footage of the chicks’ first interaction with Luna, of their meeting Bomber, and of their development went viral on his YouTube channel.

The owl couple meet their foster chicks for the first time:

“There’s always a small chance these things can go wrong. … Nevertheless, when it turns out well, it’s amazing,” Fuller said. “It seems to have really struck a chord, and the videos have been watched millions of times.”

The owlets were named Dawn and Dusk by netizens who were following the story, after a viewers’ poll on Fuller’s channel. The siblings have now fledged the nest and are both doing well in the wild.

Luna and Bomber are something of a power couple, despite recent disappointments in hatching their own eggs; they have raised chicks in the past, including another orphaned pair, Eric and Ernie, who Luna welcomed into her brood of four while Bomber hunted for food.

On his website, Fuller describes dutiful father Bomber as “a tender parent,” “fiercely territorial,” and showing no sign of slowing down despite his advanced age.

The wildlife expert, who has rescued and rehabilitated many different species of English wildlife, lives on a farm in the hamlet of Great Givendale, just 3 miles from where he grew up. He’s been close to animals since childhood.

“The farm was designed to be in harmony with nature, so I spent my early days surrounded by wild creatures,” he told The Epoch Times.

Since Dawn and Dusk flew the nest, Fuller has taken on two more rescued tawny owlets. He has the perfect adoptive mother in mind.

“There’s a chance that Luna may take on these two as well,” he said. “If not, I will feed them myself since they are almost ready to go. It is always better if they are raised by a wild owl than a human, so it’s worth a try!”