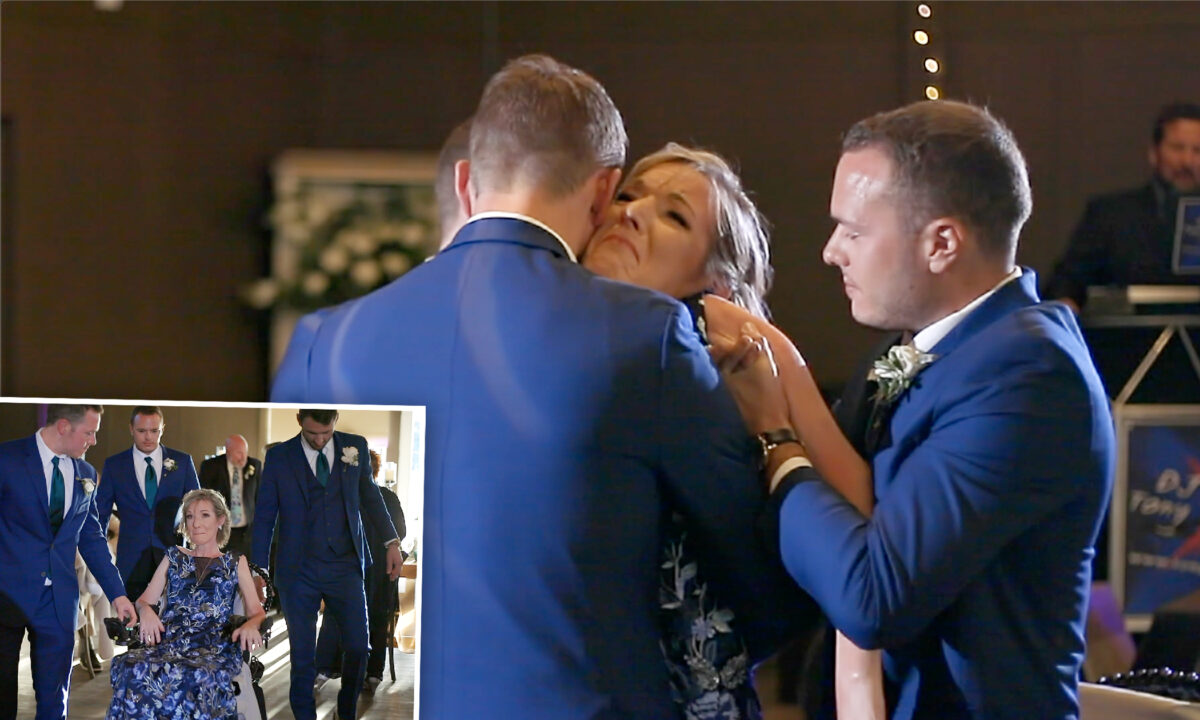 Video: Mom With ALS Stands for Mother-Son Wedding Dance With Help From Her 3 Sons

In a tear-jerking moment that was caught on camera, a woman with amyotrophic lateral sclerosis (ALS) stood and shared a mother-son dance with her eldest at his wedding, with support from all three of her sons.

Connecticut-born-and-raised Kathy Poirier, 55, now lives in southwest Florida. She was diagnosed with the “unforgiving disease” three years ago. Since battling the disease, Kathy has lost the use of her legs and arms. Additionally, she faces some breathing difficulties, but hasn’t lost her voice yet.

Kathy has three sons: Zak, 28, and twins Nick and Jake, both 27. When her eldest got married in Mims on April 9 to his sweetheart of eight years, Anja D’adesky, Kathy was determined to stand at his wedding.

“I was just so devastated that I wasn’t going to be able to dance with him,” she told The Epoch Times. “We talked about it, and I really wanted to make it happen.”

Kathy, who practices meditation as part of a holistic lifestyle, visualized dancing with Zak ahead of the big day. She recalled, “I was very worried the day of the wedding … it was very emotional, but I wouldn’t have done it any other way.”

In moving footage of the mother-son dance, twins Nick and Jake help lift and support Kathy as she dances with Zak, while loved ones look on. All three sons were comforting her throughout, said Kathy, with the words, “We’ve got you Mom, don’t worry. We can do this.”

As they danced, Zak leaned in and told his mother, “I love you.”

Being able to be a part of this moment was truly special for Kathy.

“I had a hard time keeping my tears at bay, but it felt great,” said Kathy. “It felt liberating to get up and have a moment like that with my son at a milestone in his life. It was just beautiful.”

Both Zak and his wedding planner, Valiant Weddings, later shared footage of the heartwarming mother-son dance on Instagram, where it went viral. Yet Kathy insists the video is not about her.

“The video is about raising awareness of ALS because it’s so unforgiving,” she told The Epoch Times. “There’s not enough awareness. I’m very fortunate; I have family, I have money to spend on treatment. But it’s not just about me, it’s about all the people that are suffering from this disease that need help.”

(Courtesy of Valiant Weddings and rootstostems)

Kathy was officially diagnosed with ALS, also known as Lou Gehrig’s disease, in January 2019. Then an interior decorator running her own business, she started feeling weakness in her hands while working. She thought it was a pinched nerve, but testing proved otherwise.

ALS strikes 30,000 people in the United States every year, and of those cases, 90 percent are considered “sporadic,” said Kathy, meaning they could happen to anyone. There is no known cure and the prognosis is grim; doctors estimate that patients will live two to five years beyond their diagnosis.

Many people with ALS lose their voice, their ability to chew, swallow, and stand, and all muscle control in their neck.

With only a few answers available from Western medicine, Kathy has turned to holistic treatments for relief from her symptoms. She has changed her diet, practices meditation, and attends acupuncture, energy healing, and weekly frequency healing sessions.

After Zak’s wedding, Kathy claims her frequency healing body scan identified mental and physical exhaustion. “ALS is also very tiring,” she said. “I went the whole day, from 8 o’clock in the morning until 10:30 at night, and that’s a long day for me.”

Kathy’s son Nick, who moved back to his mother’s house with his twin to help take care of her, saw his mother lose faith amid her diagnosis. However, renewing their shared Catholic faith has helped the family believe that Kathy will be able to overcome.

“I think having that faith really helps in devastating times like this,” Nick said. “I pray every night to God that my mother will heal.

“Those unique treatments that my mother has decided to try, it makes her a warrior. She really cares about all of us in her life, and she’s willing to fight the fight for it, for everything. I want to be part of that miracle.”

In honor of his mother’s beauty and resilience, Nick has gifted her a pearl necklace, Kathy’s birthstone. He explained its significance in his own words, saying, in part, “She is unshakable, not because she doesn’t know pain or failure, but because she always pushes through … she is just like a pearl, made from grit but full of grace.”

Kathy, who was raised Catholic, laments that it took her disease to reunite her with God, but has since found a “wonderful church” that she attends every Sunday. She now believes there is a reason for her affliction.

“I’m not expecting God to heal me overnight; what I think is that God is saying, ‘You are strong enough to handle this disease. Let’s use you to help others and inspire others,'” she explained.

Kathy’s bond with her sons has always been strong. She was a stay-at-home mom when her children were young, and has instilled in them her core values of honesty, kindness, strength, independence, humility, and love for others.

Nick has countless fond memories of his mother, including her help with school projects and field trips, treasure hunts, crafts, and scrapbooking of all their adventures and vacations.

“I just loved being around my kids. I still do,” said Kathy, who said she misses “all the little things” since losing the use of her legs and hands. She also dreams of what she would do if she ever regained that use.