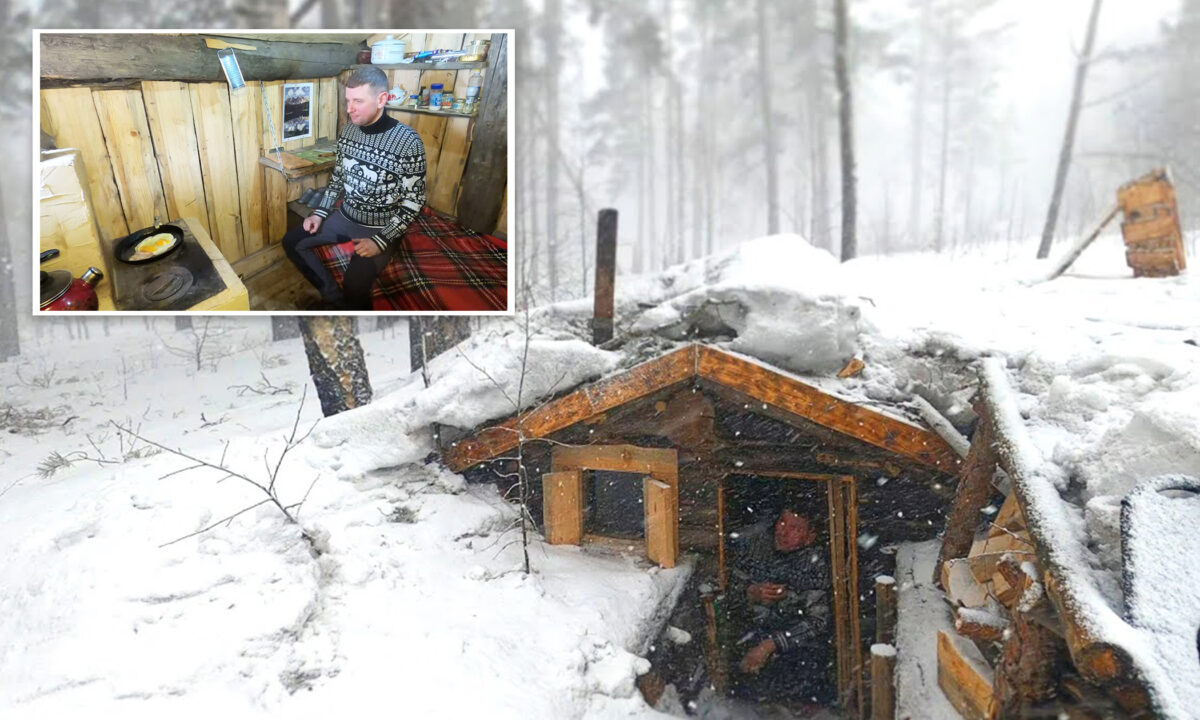 A Sweden-born furniture seller, inspired by a hut he stumbled across while walking in nature, has built himself a dugout wooden shelter in the forest. From start to finish he worked alone, and the impressive solo project has become his private haven.

Alex Wild, 36, owns his own business selling furniture for homes and offices. Married with two children, a baby and a 4-year-old, he was taking a walk by himself when he came across a “beautiful little hut” on the bank of a river.

“There was no one there, I went in and spent the whole day there,” Alex told The Epoch Times. “After that, I realized that life is not inhaling the aromas of cars passing by me; life is unity with nature.”

Alex located one of his favorite spots in the forest, 60 kilometers (approx. 37 miles) from home, and set to work on his dugout on a whim. It started with a hole in the ground.

“I don’t have any special skills,” he said, “mostly life experience … some skills were acquired thanks to my father. I didn’t even have a project in my head. I built everything intuitively and wanted everything to be beautiful, that’s the only thing that moved me.”

With the exception of one day, when Alex’s friend Dennis lent his skills to the task, Alex worked alone. He estimates it took $500 for materials and between 15 and 20 days, from his first day of digging to the final touch of fitting a brick oven inside the finished dugout.

Alex described the process: “When the very first stages of construction were completed, and when I saw the frame of my house, construction turned into communication with wildlife and every day brought new surprises.

“Just imagine, I start working in the morning, the birds are singing, the sun is shining, then the weather changes dramatically, the wind rises and the rain begins. When I see these changes in nature, live, being in the forest, it’s something incredible; the forest and wildlife were my main motivators!”

Since finishing his dugout, Alex spends two days a week enjoying the solitude of his hidden home in the woods. He buys groceries at the nearest store, 10 kilometers (6.2 miles) away, bathes in the river in warmer weather, and uses a self-built sauna inside the dugout in winter.

Looking back, there were challenges in the construction of the dugout.

“There were two most difficult stages for me. The first one was when I was digging a hole, it was over 38 degrees [Celsius] outside, and there was not even a hint of wind. In those days it seemed to me that nature was against me,” Alex reflected.

“The second most difficult stage was connected with the installation of the frame,” he continued. “The fact is that I built everything myself, except for one day where it was very difficult for me to lift large logs … and drag them to the construction site alone.”

But in fitting a furnace, Alex discovered that he likes working with bricks and mortar. The roof was his biggest construction challenge, but he commends himself for fitting a weathertight roof that does not leak. Likewise, making and installing doors for the very first time was a huge success for the self-taught carpenter.

There will always be need for changes and improvements to the dugout, said Alex, insisting, “But you need to strive for perfection.”

After sharing footage of his immense solo project on YouTube, Alex was delighted by the positive public response. His first video has amassed over 5 million views. “There were so many comments. Most of all, people were just impressed with my construction,” he said.

Alex says he loves spending time in the dugout and, especially in winter, he is often overwhelmed with “joyful emotions.”

“It’s snowing all around, and I’m sitting by the stove warming myself and looking out the window; the best emotions in my life, after the birth of two sons,” he said. “Sometimes you want to forget your name, forget what electricity is, and not see all the ugliness around. For these purposes, I have my house in the forest.”

Having found his peace, he now encourages other people to make peace for themselves and others.

“Let’s stop throwing garbage wherever we want, stop hitting each other and fighting,” he implored. “We are all the same people; get out into nature, love the forest … let’s try to become a little kinder toward each other.”