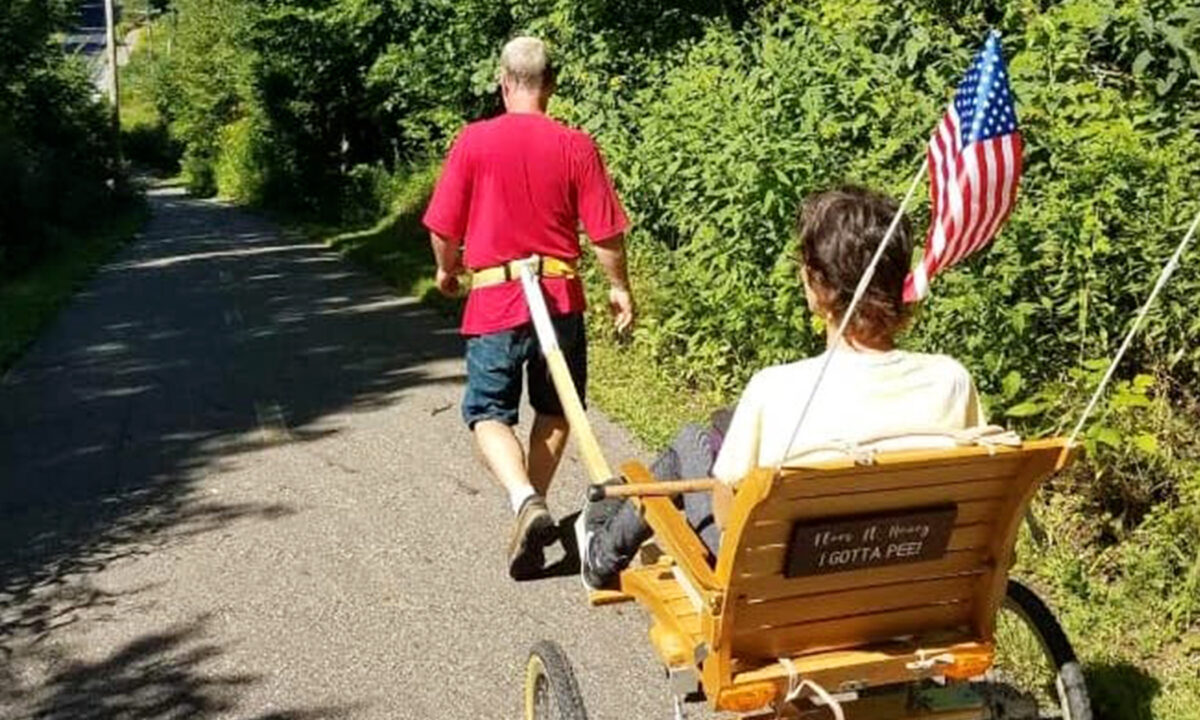 VIDEO: Husband Builds Rickshaw for Wife with MS to Continue Their Daily Walks Together

A couple celebrating their 'continued commitment' every moment of life
BY Louise Chambers TIMEJune 22, 2022 PRINT

A couple who had always enjoyed long walks together were devastated when the wife was diagnosed with multiple sclerosis. Walking became harder, but the husband was determined; he built a rickshaw, allowing him to pull his wife on their favorite walking routes and keep their shared pastime alive.

Michigan natives Rick Dorothy, 64, and Jan Dorothy, 57, have been married for 27 years and cherish their long walks together. It was during those brief moments of “alone time” that they shared their woes, talked about what made them happy, and planned trips together to alleviate the stresses of life.

A 2-mile circular route by a lake near their Michigan home became their favorite walk.

However, everything changed when Jan was diagnosed with multiple sclerosis (MS) in 2006.

Rick said that Jan had a hard time taking a step with her right leg up while walking, and it kept dragging. “We kind of discovered it from our walks,” he told The Epoch Times. “I thought maybe she was just out of shape because she didn’t do a lot of walking before we got together.”

But after a walk with friends, who were heavier, and smoked, Rick and Jan knew something was terribly wrong. They made an appointment with a doctor, and Jan was diagnosed with MS.

The couple started doing everything they could to try and slow the progression of the disease. Rick helped his wife with daily exercises, and learned to give her weekly shots, which helped but made her feel like she had the flu. Still, they kept walking.

“Jan has never, ever cried one time; she’s never felt sorry for herself,” said Rick. “I’ve cried, but she’s a tough girl.”

Rick doesn’t recall exactly where the idea for the rickshaw came from—”A movie?” he speculated. But the idea became a family joke.

“My name is Rick, so I said, ‘Maybe I should make you a rickshaw and pull you around!’ Everybody laughed about it, but I was a little more serious because I love to invent things,” he said.

The thoughtful husband had most of the parts he needed, and the build took a couple of weeks. He was to pull the rickshaw using a belt around his waist; Jan tested crude plywood seats during the build to help her husband find the perfect balance point.

Rick tried to make the 25-pound rickshaw “aesthetically nice,” and fitted big tires to make Jan’s ride as smooth as possible. During their test run, a tour of their 500-foot driveway, Jan exclaimed, “Oh, this is not too bad!”

The true test for the rickshaw, said Rick, will be taking it on a family-favorite route along an old railway track near their home, where they can forage for mushrooms and enjoy the native flowers and wildlife. The first time they walked this route was on Mother’s Day, and it became an annual tradition.

“I think it means a lot to all of us,” said Rick, explaining that he has only left the house for food and doctor’s appointments since the onset of COVID, as Jan is immunocompromised. In 2022, the family feels safer.

Rick, now retired, has had several jobs, including construction, woodworking, and boat-building. While he is not prepared to make replica rickshaws for others, he is more than happy to share his tips and tricks on social media.

“I took a video and showed people how you can remove the parts of the rickshaw, put it on your car, and then when you get to where you’re going to walk, you just pull it out, put a few pins in it, and it’s all back together,” said Rick. “I’m very, very willing to help people out any way I can if they want to make it.”

Rick and Jan built three houses together while Jan was able. Since her diagnosis, Rick has finished building a specially adapted one-story house to ADA (Americans with Disabilities Act) standards, including grab bars in the bathroom, a walk-in shower, accessible cabinets, and a downstairs bedroom “for the future, if it’s needed.”

Jan has a stunning view of 70 acres from her window, with nightly visits from deer and wildlife galore.

The family’s land is special; after marrying, Rick and Jan bought the 70-acre plot that included a special tree.

“When we first got together, I took Jan on a hiking date,” Rick recalled. “We went for a walk in the woods. I decided to profess our love to the world by carving a heart [into a tree trunk] with our initials inside. Later, we married, had children, and bought the 70 acres where that tree was.”

The couple would often sit under its branches to reflect on life. Years later, a large storm passed and blew the tree over. “We felt like we lost a family member,” said Rick, adding that he later cut out part of the tree with a chainsaw to make a beautiful keepsake of their love. The decorative shelf made out of that tree now holds a special place in their anniversaries and in celebrations of their “continued commitment.”

“I have since gone out and carved our initials into another beech tree, just for insurance!” he said.

Jan’s MS has moved on from “relapsing remitting,” where patients suffer periodic attacks followed by slow recovery, to “secondary progressive,” whereby the change is steady. Some people progress very quickly, said Rick, but so far, Jan’s progress has been slow.

The couple’s positive attitude has kept them focused on the things they can do; Jan keeps up her daily exercises, can still do the dishes and a little housework, make beds, and walk with the aid of a frame. She has trouble swallowing, and Rick has to perform the Heimlich maneuver if ever she chokes.

“Most are good days,” he said, “but there are some days where it’s kind of scary and we just get through it together.”

Describing Jan as sweet and good, and “an easy person to love,” Rick praised, “She’s never said, ‘Why me?’ She’s quite a religious person. I think she has a lot of faith that everything will be as good as it can be.

If Jan loses the ability to walk entirely, Rick is confident that they will overcome. “If you can’t walk, it doesn’t mean you can’t still enjoy life,” he reasoned. “There’s still a lot to see.”