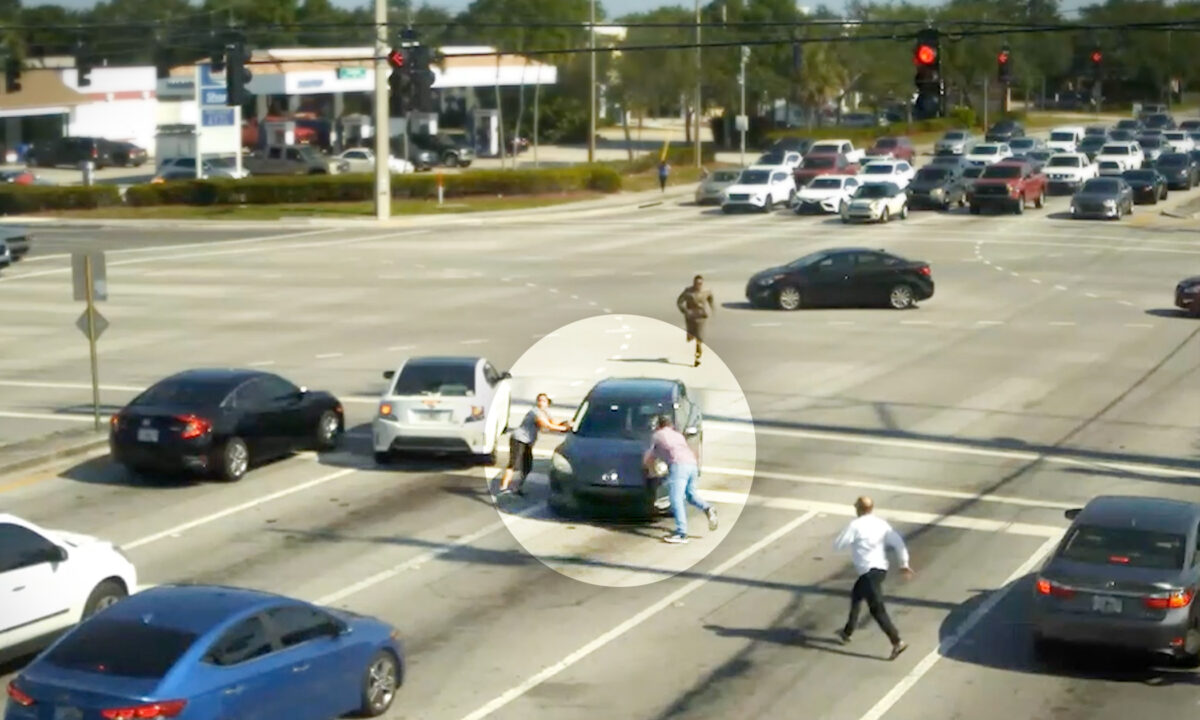 VIDEO: Driver Has Medical Emergency at Busy Intersection, Loses Control, but Good Samaritans Team Up, Save the Day

A female motorist in Florida suffered a medical episode at a busy intersection last week. But a host of good Samaritans teamed up, acted in concert, and prevented what could have been a tragedy, stopping the woman’s stray car and calling emergency to save her life.

On May 5, a woman driving in Boynton Beach was seen slumped over her steering wheel at the intersection of Congress Avenue and Woolbright Road. Her colleague, in another, nearby car, saw her unconscious coworker, got out, and tried to flag other motorists for help.

The unconscious woman in her car began to creep slowly but precariously into the busy intersection as traffic continued. Divers in the opposite lane realized what was happening and got out to help. Harrowing security footage from a nearby convenience store caught the whole incident on camera.

One man is seen trying to stop the car, pushing on the front of the car; he’s soon joined by a man in military fatigues, and they are able to halt it.

Another woman brings a dumbbell which is used to smash the rear window of the car, then a man climbs in through the window and unlocks the passenger’s side door.

Together, the group of motorists push the vehicle into a 7-11 parking lot across the street, while a nurse who was present dials 911. Thankfully, none were injured.

Then on Friday, May 13, the police department, who managed to track down all the good Samaritans who joined forces to save a life and prevent a potential tragedy, recognized their good deed at police headquarters and reunited them with the woman they saved, Laurie Rabyor.

The heroes were also each rewarded with a complimentary Royal Caribbean cruise and $2,000 gift card.

“The moment I saw this young lady running across the street behind the car, yelling, ‘She’s unconscious! She’s unconscious!’ there was no doubt in my mind I needed to do something,” said Juan Chavez Jr., the man in military uniform who acted at the scene.

“I don’t remember any of it,” Rabyor told her saviors at the reunion. “I appreciate it so, so much, you don’t even know. My children love you, they just love for helping their mom.”

She added jokingly, “And I don’t know if any of you saw any of my interviews, but you notice? I got you a boat!”

The police department posted the frightening footage on Facebook while lauding the rescuers for their valorous act, captioning: “We don’t think it’s an understatement to say that these good Samaritans are an inspiration of goodness in our country today!”