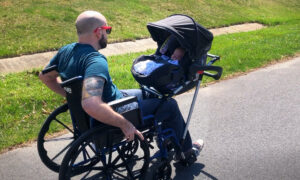 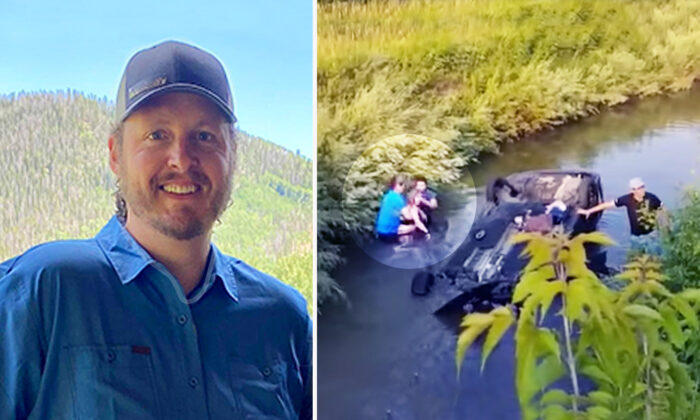 Seeing a woman lose control of her car and flip into a roadside canal, a good Samaritan pulled over, dialed 911, and rushed into the waist-deep water to save her.

Thanks to his quick thinking, the crash victim survived with nothing but minor cuts. However, she was later arrested on eight counts, including a first-degree motor vehicle theft and possessing a defaced firearm.

Talking to The Epoch Times, Rob Reynolds, 39, from Arvada, Colorado, said he was driving his truck down Kipling Street on the fateful day of July 11 when a fellow driver caught his attention.

“All of a sudden this young girl came cruising up beside me and started drifting off the road,” said Reynolds, whose 7-year-old son was also in the truck that day.

“Her car bounced off a curb and off a guardrail, and then shot straight across the road right in front of me, just perfectly right between two guard rails and down into a canal where she landed upside down.”

Reynolds’s first natural reaction was to “avoid an accident,” but in a flash of seconds, his attention was all focused on the driver who needed help urgently. “This is not good, I’ve got to help. She’s in trouble,” he thought.

He stopped his truck, leapt out, and called the emergency services.

“I was on the phone and knew I had to get in the water,” Reynolds said. “But dispatch, they didn’t want me to hang up.” Fortunately, a female passerby got involved, taking the phone from Reynolds as he scrambled down the canal bank with two other men.

Between them, the trio prised open the flipped car’s doors to rescue the woman trapped inside. According to Reynolds, she had nothing but a “pocket of air” to breathe.

“The water was probably three or four feet deep,” he recalled. “From the time she went into the canal to the time we got her out was maybe less than 10 minutes. It was pretty, pretty quick.”

Reynolds said that the woman was in shock. He held her and guided her to the bank as she sobbed and thanked her rescuers, having escaped with minor cuts and no serious injuries.

After all was said and done, Reynolds claimed he had his own hero that day, too.

When Reynolds jumped out of his truck to help the crash victim, his terrified 7-year-old son was left alone in the vehicle.

“He was very brave,” said Reynolds. “But my hero that day was a woman named Julie, who came out and offered to get in the truck with him and sit with him to help calm him down. That, to me, is everything.”

Though he never met the victim after the crash, Reynolds said he did hear from her mother, who reached out to him on Facebook. “She told me that they hadn’t seen their daughter for a couple of years, and they lost track of her,” he said. “They didn’t know where she was living or anything like that.”

The video footage of Reynolds’s rescue was the first time she had seen her daughter in two years. “That was pretty powerful,” he said.

The rescuer’s sister, Michelle Reynolds Hill, shared her brother’s heroic feat on Facebook, including his possible nomination by the Arvada Police Department for the Arvada Lifesaver award. “The craziest part is that this is the 3rd major accident my brother has witnessed and been the rescuer,” she posted.

Reynolds said that a police officer had told him that they’d put his name for the award, but he doesn’t know “if it’s official or not.” “But if it did happen, it’s an honor,” he said. “It’s also a weird thing to be called a hero. I struggle with that word. I’m honored.”

However, Reynolds—who dreamed as a child of becoming a doctor, and now works as a licensed marriage and family therapist and has earned an EMT certificate—concedes that he’s helped save lives before. He tended to a driver who spun out on a highway in an incident which caused other cars to crash. Everyone survived. He also supported a motorcyclist who crashed at an intersection before a nurse arrived on the scene.

“It happens a third time and I start to feel like maybe my calm demeanor helps me in those situations, to be able to help other people,” he reflected. “So yeah, right place right time. I believe things kind of work out on purpose, the way that they’re supposed to, and so there could be something to that.”

Reynolds credited his parents for upright bringing and leading by example.

“My mom is just always selfless and always sacrificing her own needs, for others, honestly. And so is my dad. He’s always willing to help where he can,” he said.