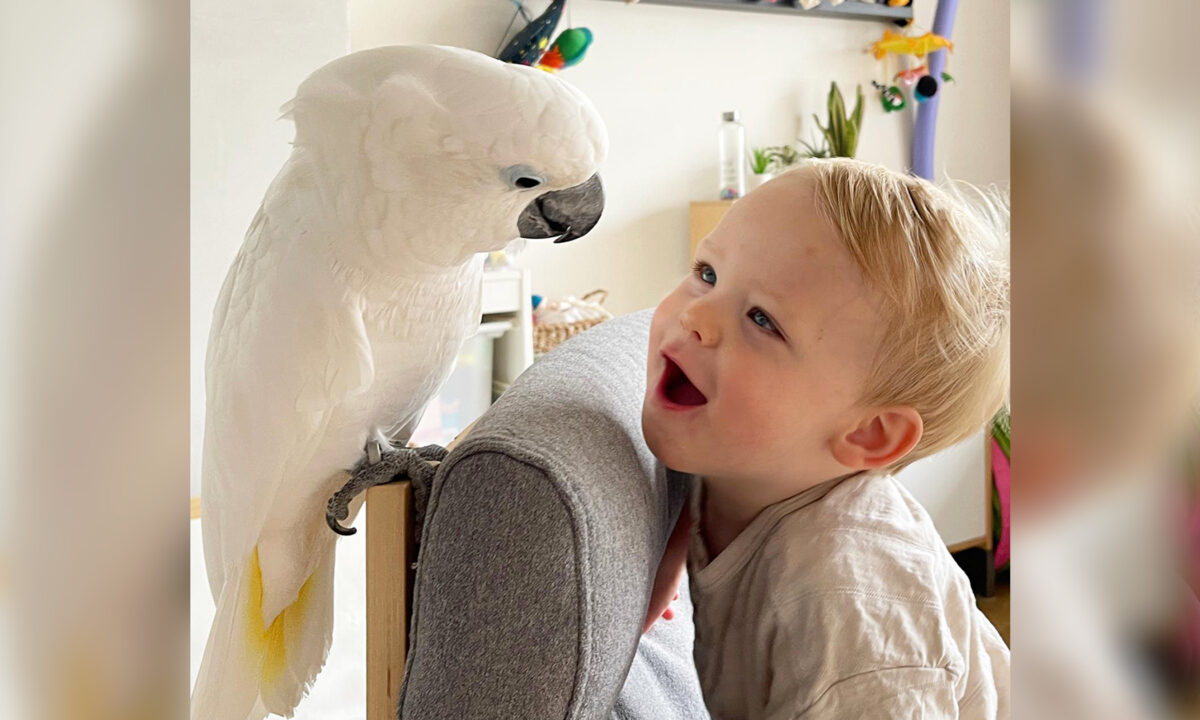 (Courtesy of @marnithecockatoo and Marni the Cockatoo)
Animals

VIDEO: Cockatoo Jealous of Owner’s Baby Son Finally Falls in Love, Now They Do Everything Together

Marni the cockatoo simply adores his little human owner, Rémi. The pair, who share a brotherly bond, love nothing more than playing together. But, according to Rémi’s mom, Grietje, it wasn’t always this way.

“When Rémi was born, Marni was super jealous,” the 36-year-old digital project manager from Belgium told The Epoch Times.

Since cockatoos can bite and be unpredictable, it took a lot of baby steps and close supervision for the bird and the boy to get to know one another. From the start, said Grietje, her new baby was fascinated by the feathered creature, and soon, Marni was involved in all kinds of moments.

“When Rémi was sleeping on top of me, when he was awake, drinking milk, eating, having baths… I chose to let them get to know each other from the very beginning,” she said. “Marni’s signs were always very clear and he has never bitten me, nor Rémi.”

Perhaps the love they now enjoy has something to do with the time Rémi was still in the womb. One day, when using a doppler to hear her baby’s heartbeat, Grietje brought Marni in on the moment.

“He was very curious about it,” she recalled. When my belly grew, he picked it as the perfect spot to sit on. I always joked that he helped to hatch the egg.”

Now past the two-year mark, Rémi is a perceptive, energetic, and sweet personality. A big talker, he likes to sing and dance and is always super happy to see Marni.

“When I say that Marni is naughty,” said his mom, “he’ll point his finger at Marni and say that he’s a bad bird.”

Watch best moments of Marni and Rémi thriving together:

The two do all kinds of activities together. In one video, Rémi is feeding Marni soup, and in another, he is filing his friend’s nails. Mostly though, the boy just wants to cuddle, kiss, and hold his darling cockatoo.

For his part, Marni likes to sit close to Rémi and be part of the fun. Sometimes though, he has had enough of the toddler’s energy.

“Then he distances himself and flies to his globe, a safe spot where Rémi can’t reach him,” said Grietje.

Being a new mom with a pet cockatoo has been a challenge, requiring a lot of patience. “I involved Marni in moments with Rémi and also made sure that we had Marni-Mommy quality time without Rémi. Up till today, every evening when Rémi is sleeping, Marni and I have our chill time. I also work from home, so Marni is my work buddy,” she said.

Grietje, who grew up with parrots, wanted to have a cockatoo since she was little. She bought Marni from a breeder six years ago when he was 8 weeks old; however, she recommends anyone considering getting a bird to adopt instead of buying.

An umbrella cockatoo, Grietje calls Marni a real “dogatoo,” since he likes to force her to give him head scratches as a dog would do. Pointing out that cockatoos are very smart—about “10 times smarter” than dogs—Grietje sees a lot of similarities with her toddler son.

“Cockatoos are lifelong toddlers and ask for a lot of love. They look very fluffy and sweet and cuddly. But the flip side is that they are very manipulative and need a lot of attention,” she said.

“Marni is very messy and likes to throw food around. He destroys everything he sees. The moment you don’t hear him walking around, you know that he’s biting something. He loves remote controls, cables, furniture, and curtains.

“They are far from the easiest pets to have, and a lot of parrots end up going from home to home, so for anyone interested in getting a cockatoo, do inform yourself well before making the decision.”

While Marni can be hard work, Grietje adores her loud, naughty bird and wouldn’t have him any other way. He loves showers and macadamia nuts, eats veggies, rice, or pasta for dinner, and likes to steal food from human plates.

“He likes to tap things—it’s his way of showing that it’s his property” Grietje explained. “He’s not a big talker, only in cockatoo language. He says ‘hello.’”

A true member of the family, Marni has even been away on holiday with them, walking in the mountains when Rémi was 6 months old. And at bedtime, when Rémi drinks his bottle of milk, Marni sits close, enjoying the ritual with his best friend and baby brother.