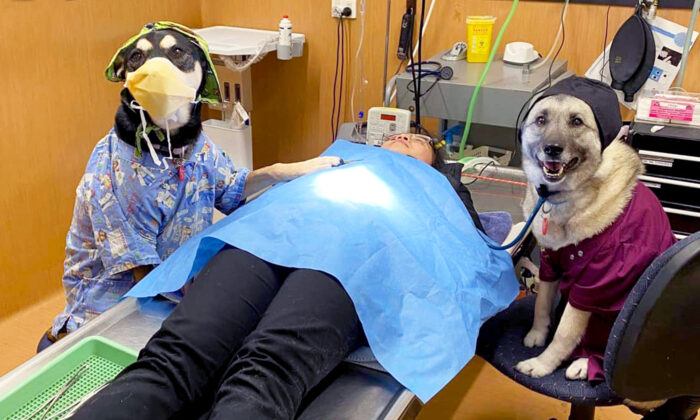 A New Zealand veterinary nurse who spends her days helping save animals’ lives has won a photo competition with a funny snap of her dogs posing doing the very same thing.

Rosie McCarthy, 28, organized the winning photo at her clinic in Hamilton on New Zealand’s North Island with the help of her co-workers, and the cooperation of her pups, Kaeli and Shiloh. In the photo, a human “patient” lays on the operating table while the two dogs tend to her, dressed in scrubs, one wearing a mask and the other with a stethoscope.

“My colleague, Emma, came to me and shared a couple ideas she had for the competition,” Rosie explained to The Epoch Times. “I suggested that I bring my dogs into work with me one day, and since we’re in a clinic, it provided the perfect ‘working environment.’

“I had faith that Kaeli and Shiloh would cooperate,” she continued. “They are very well-behaved dogs, and are exceptionally tolerant of my various crazy escapades!”

The “Dogs at Work” photo competition was run by a veterinary supplier named Norbrook that wanted photos of pets at work for a calendar, and Rosie’s entry won them over.

After winning first place in October, Rosie shared the photo on her private Facebook page and the response was immense.

“It has been overwhelming! My phone was blowing up with notifications for days,” said the proud dog owner, adding, “I appreciate the opportunity to share my girls with the world and hope the photo made people smile, especially in these uncertain times.”

Rosie, who lives in a small Waikato community outside Hamilton with her husband, two dogs, and two horses, had known she wanted to work in veterinary medicine since childhood.

After graduating as a vet nurse, Rosie worked in an after-hours emergency clinic for over three years before taking her current role at a general practice clinic in 2017. She has a keen interest in animal behavior and loves creating positive interactions with all her patients when they visit. The most rewarding aspect for her, she says, is “being involved with a case from start to finish.”

It can be challenging to multitask, Rosie says, and hard to figure out what ails her furry clients, with whom she cannot talk, but nursing gives her purpose. “It encourages me to push myself,” she explained, “to strive to achieve the best for my patients, and be the best advocate I can be.”

As for her dogs, the veterinary nurse describes Kaeli, an almost-10-year-old female New Zealand huntaway cross, as “opinionated, intuitive, intelligent, and loyal … the perfect first dog.” The vet nurse was volunteering at her local SPCA when the two of them met. The then-12-week-old puppy crawled into Rosie’s lap, fell asleep, and won her heart. Rosie immediately took her home.

Meanwhile, Shiloh, an almost-7-year-old female Norwegian elkhound, is Rosie’s “super sleuth,” always the first to investigate any new situation. She was an intentional addition to the family. Once, as Rosie was researching breed options for their next dog, she stumbled across Norwegian elkhounds and was smitten. A breeder put her on a waiting list, and a year later, Shiloh joined the family at two days of age.

“She is nicknamed ‘Smiloh’ because she is always smiling and is a very people-oriented dog,” Rosie said, describing her personality. “She’s terrified of plastic bags and the vacuum cleaner, and obsessed with lettuce and carrot. She is the more likely one of the two to cuddle up with you on the couch.”

Both dogs have learned numerous tricks since the very first day with Rosie. They are “as close as sisters can be,” since they have spent their lives together.

“I have a strong bond with both of them and they bring such joy to my life,” Rosie said.