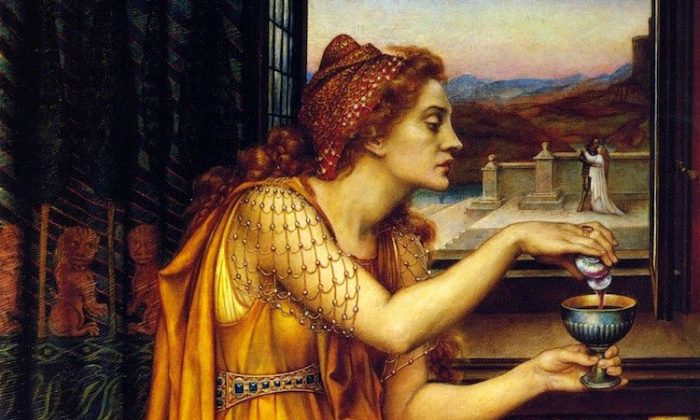 Love potions were popular in many cultures in the past and are still commonly used in regions such as Zimbabwe, where traditional healers sell their happiness-in-a-bottle for $40 to $70.

The herbs in some love potion recipes do have real physical effects related to romance—they can produce excitement, euphoria, or simply a pleasant scent that may be enchanting to the opposite sex. Some ingredients will churn your stomach, and not in that butterflies-in-your-stomach, I’m-in-love kind of way.

Here’s a look at some popular ingredients and a few old recipes.

1. Earthworms With Periwinkle and Leeks

A 16th century book, “The Boke of Secretes of Albertus Magnus of the Vertues of Herbes, Stones and Certaine Beastes,” suggests mixing periwinkle with leeks and earthworms; once ingested, the mixture will strengthen love between a man and his wife.

In England, an old custom holds that on the eve of St. Valentine’s Day a woman should pin bay leaves to her pillow, one at each corner and one in the middle. The woman will dream of her future lover or the man she is to marry, according to lore. Retired professor D.L. Ashliman included this custom in a compilation of European superstitions for the University of Pittsburgh.

3. Marigolds in Your Lover’s Footsteps

In the 16th century, marigolds were included in love potions or placed in a desired lover’s footsteps, according to the Georgetown University Medical Center. The plant was known as the “sun-bride” in the Middle Ages.

In 17th century France, love potions were often a combination of menstrual blood, Spanish flies, and natural herbs, such as verbena, according to a Chicago-Kent Law Review article. Many sources state that the Spanish fly was a common love-potion ingredient.

St. Olaf College in Minnesota describes some beliefs about the wild columbine in a profile of the plant:

“Love Potion: Meskwaki Indians believed that pulverized columbine seeds combined with other ‘potion’ ingredients could be used as a love charm. Men rubbed the mixture on their hands, using it as a ‘love perfume’ to attract women. Columbine seeds were prized as a commodity of intertribal commerce.

“Superstition: Columbine is emblematic of deserted, fallen, or unrequited love. Giving a woman a bouquet of columbine was considered a sign that her husband or lover was unfaithful.”

The datura plant, also known as Jimson weed or thorn apple, is a potentially deadly hallucinogen. It stimulates, then depresses, the central nervous system.

It was used in India and some other places around the world in love potions. It was also used by some indigenous peoples in South America to induce a stupor in women who were to be buried alive. Dead warriors and chieftains were honored by having their wives or slave women buried alive to accompany them in the afterlife.

Jenks writes:
“The potions included ingredients such as herbs,roots, powders, corn kernels or cornmeal, milk, fried or mashed worms, and bodily fluids, and were often either spread upon the sleeping victim’s chest or prepared in his food, or both.

“Some rituals even involved the use of fire and smoke signs, a practice that may have had its origin in Spain. Within the context of the trials, most of these practices were said to be ineffective.

“In other cases, herbs placed in drinks or rubbed on the hands, powder scraped from inside large shells, and colored beads worn on bracelets were mentioned as charms for finding wealth, love, and speed.”

This love mixture only works on Oct. 18, the feast day of St. Luke. Richard Alan Miller, who was a physicist for the Navy in the 1960s before becoming an expert on alchemy, mysticism, and alternative agriculture, writes: “An old love charm recommends cutting marigold flowers, sprigs of marjoram, thyme, and a little wormwood on St. Luke’s Day. Dry them before a fire and rub into a powder. Simmer over a slow fire in a small quantity of unprocessed honey and vinegar. Anoint yourself with this mixture when going to bed, saying the following: ‘St. Luke, St. Luke, be kind to me, in dreams let me my truelove see.’”

An article published by University of Oxford researchers in the American Journal of Bioethics looks at “cures” for love.

“Ancient cures for love included phlebotomy, exercise, bloodletting, avoidance of rich foods or wine, and drinking plenty of water,” the paper states. In the fictional “Harry Potter” series, a love potion antidote may be brewed by combining Wiggentree twigs, castor oil, and the extract of a Gurdyroot.

And on a more serious note, some drugs used to treat obsessive compulsive disorder (OCD) can inhibit the emotional and obsessive responses associated with love or infatuation.

“We may one day ﬁnd ourselves with an array of pills, biochips, and neuroceuticals that could successfully ‘treat’ problematic passions—perhaps even at a low cost and with limited side effects,” the paper states. “Having conjured these powers of some Bizarro Cupid, we would need to ask ourselves: Should we use them?”