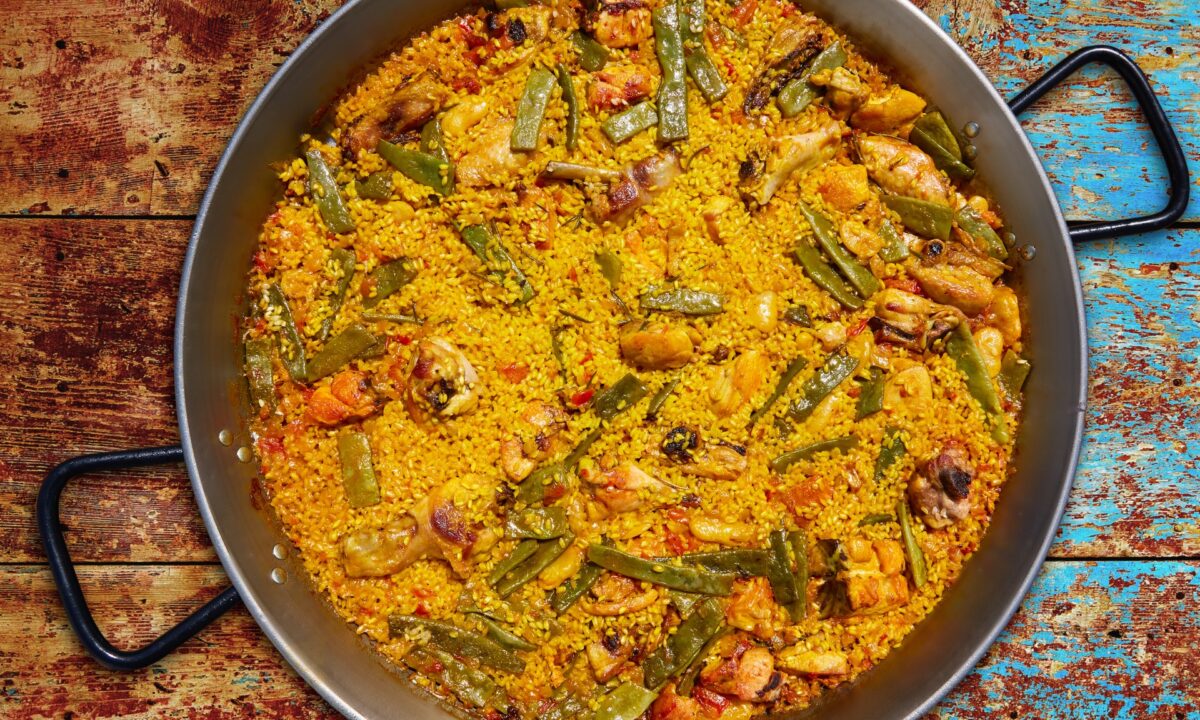 Traditional paella Valenciana, a meal of the Valencian countryside, is made with chicken, rabbit, green beans, and other ingredients from the surrounding land—including the all-important arroz. (LunaMarina/Shutterstock)
Food

I love when people take certain foods so seriously that a dish rises above just a recipe and becomes a sacramental meal, a ceremonial preparation that needs to be blessed by congregants and celebrated in a particular way. Such is the case with paella.

On a recent trip to Valencia, Spain, I had a chance to experience the region’s iconic dish and learn exactly what one needs to do to make the traditional Valencian paella.

Valencia is an autonomous community within Spain, comprised of three provinces—one of which is also named Valencia. Its capital is also Valencia, Spain’s third-largest city after Madrid and Barcelona. The region lies along the Mediterranean and as such enjoys hot, dry summers and mild winters. The city itself got its start as a Roman settlement in 138 B.C., and the area has a long affiliation with farming, including some rice production.

When the Moors came to Valencia in A.D. 718, they brought better irrigation techniques, something that benefited rice production greatly. The Arab word for rice soon made its way into the local language in a derivative form, arroz, and arroz itself would become the base of a dish that became synonymous with Valencia itself: paella.

It’s a meal of the countryside. The field workers would gather together for meals prepared by one of their own using ingredients already at hand: rice, fresh vegetables, and farmyard meats. The tradition carries on and lies at the heart of Valencian culture: good, fresh food plus a community gathering.

Toni Montoliu, farmer turned master chef and preacher of paella, is the owner of the country farm-restaurant La Barraca de Toni Montoliu. The reputation and popularity of his restaurant make getting a reservation nigh impossible. His love affair with paella goes way back.

“When I started helping my mother to make paella, I was about 5 or 6 years old,” recalled Montoliu, who often cooks outside over an orange-wood fire at his restaurant. “Then at 16 was when I really threw myself into cooking a paella by myself.” A rite of passage.

In many families, the men cook this dish, but not so for Montoliu. “In my house, it was my mother who made the paella on Sundays; therefore, she is the one who was adored during what we could call the ‘ceremony’ of preparing or cooking a paella, which lasted about two hours.”

Toni acknowledges there are other recipes for paella—seafood is a popular ingredient—but none of them are traditional. “All the other paellas are ‘rice with stuff’ that—well, they can be good, that is not disputed—but they are not the authentic Valencian paella, which calls for virgin olive oil, chicken, rabbit, duck, green beans, white beans, which is the locust bean, a little tomato, sweet paprika, saffron, then water, rice, and a sprig of rosemary are added.”

Máximo Caletrío of Visit Valencia, who managed to perform the miracle of getting me a table at La Barraca de Toni Montoliu—plus a tour of the farm and some kitchen time with the cook preparing that day’s massive pan of paella—is also passionate about making it.

“Paella is something that we Valencians carry deep inside,” Caletrío said. “It is part of not only our gastronomy, but our culture, tradition, lifestyle. It is a dish to share and enjoy with family, friends, and at social events.”

As Máximo and Toni will each tell you, this is by its very nature “slow food.” “We traditionally cook it on Sundays … with family, friends, when we have more time to cook without rushing,” said Caletrío.

Paella Around the World

But a dish so good unsurprisingly traveled the world and started appearing in forms that drew shock and horror from the diehard Valencian paella makers. Meat and seafood together in the same paella? The horror! Creamy rice? I can’t even. A paella sandwich? Ay, Dios mio. Just no.

In 2014, to battle the misappropriation of the term, a group of Valencian chefs—Toni Montoliu among them—and several companies came together to form a foundation to settle, once and for all, the guidelines for true Valencian paella. They call it Wikipaella (Wikipaella.com/en), and you can find approved recipes and restaurants as well as the mission statement of these paladins of paella. They even have a Twitter account.

In October 2021, Valencia’s regional government declared it an Asset of Cultural Interest, giving the dish legal protections. It has also been submitted to UNESCO for consideration on its list of Intangible Cultural Heritage.

We can all celebrate World Paella Day on September 20th each year, and now there’s even a paella emoji on your phone. Spaniards use the little paella pan image as a sign of celebration. So while it is truly the heart of Valencia, that element of sharing crosses borders and boundaries.

In May 2020, from his home in Bethesda, Maryland, Spanish-born celebrity chef and restaurateur José Andres did a live cooking event with Rafael Vidal, a Valencian-born master of paella who has prepared the dish for Spanish royalty, the third generation to do so in his family. Together they made paella broadcast via internet while home cooks followed along at home with a recipe distributed beforehand. Nearly 900 fellow paella lovers participated.

I witnessed the lengthy and loving process of making paella in the kitchen at La Barraca de Toni Montoliu. I might never have a paella pan this big or the requisite orange-tree wood for the cooking fire, but at least I now have a proper recipe. The instructions below were kindly put together by Máximo Caletrío of Visit Valencia. But before you begin, make sure you have the right materials.

The favored varieties for paella are Bomba, Senia, and Bahia rice, which enjoy a Protected Designation of Origin (PDO) as Arroz de Valencia (Valencian rice). (Note that Bomba rice is also grown in Calasparra in Murcia, where it’s under a different PDO.)

Bomba is short-grained (important) and has a very high absorption rate—about 3 cups of liquid to 1 cup of rice. This absorption is significantly more than other varieties, and yet Bomba rice doesn’t get mushy from that extra liquid. A higher content of amylose (resistant starch) means it also does not stick together (and is also healthier for your gut, by the way).

While some may be tempted to substitute Arborio (Italian risotto) rice, the amount of water used here would need to be reduced (more like 2 cups water to 1 of rice), and its characteristic creaminess throws everything off. Paella is not like risotto; nor is it soupy, clumpy, or gummy. Long-grain rice is just out of the question.

You also need a paella pan—a shallow, often slightly concave, steel or enameled carbon steel pan with two looped handles. Paella is best cooked over a wide uniform heat such as the wood-fire grill method. Pans on electric stovetops have trouble with heat distribution, and you will have a hot spot at the center, especially if the pan exceeds the size of the burner. Gas burners are marginally better.

What to do? Some bake theirs in an oven at 400 degrees F. If you must use the stovetop, there are paella pans specifically modified with thicker steel bottoms with a sandwiched layer of aluminum for better heat distribution. And if you are entertaining a large group, it’s either go big or go to multiple pans.

Heat olive oil in a 14- to 16-inch paella pan directly over a medium flame. Once the oil is hot, sauté the meat well to get it nice and golden, releasing its flavors: Add the chicken first, and when the chicken starts to turn lightly golden, then add the rabbit and fry until both are golden.

Add the beans and continue cooking for 8 minutes. Then stir in the grated ripe tomato and paprika until it blends in. If you are using powdered saffron, add it here. Cook until the extra juice from the tomatoes boils away.

Now add the measured water to the pan. Take note of the level it rises to in the pan—you are going to be cooking this for 20 minutes to make a broth, but as the water boils off, you will need to add more to keep it at this initial level for when you cook the rice. If you are using saffron threads, add them here. Let the stock boil for 20 minutes, then add water as needed to arrive back at the proper level. Test the flavor and add salt if needed.

Pour in the rice as if drawing a cross in the pan, then stir it in. At this point, stop stirring completely for the rest of the cooking process, as stirring will release too much starch and make the final result too creamy or clumpy, undesired qualities in paella. Add the fresh rosemary. Turn up the heat to high for a few minutes, until the rice begins to show above the broth, then bring it back down to medium-low for a good simmer, with bubbling throughout the pan.

Now here’s the trick: If your heat is too high, the water may boil away too fast before the rice cooks. If the heat is too low, the water never fully boils off and your rice overcooks. The total cooking time for the rice is approximately 18 minutes. Remove the rosemary about 8 to 10 minutes in and save it for later as a garnish.

Once the broth is no longer visible (after about 15 to 18 minutes from adding the rice), turn up the heat to medium-high for a short time, maybe a minute. The rice in contact with the pan will start to audibly sizzle and release a toasty—not burnt!—smell. (But do not let it burn!) The result is a browned and crunchy bottom layer of rice called socarrat, and it is highly prized by paella eaters. But err on the side of caution, rather than burn it. Turn off the heat as soon as you detect the toasty smell, and let the paella rest and cool for a few minutes before serving. Then set the pan at the center of the table so all can scoop from it to fill their plates.