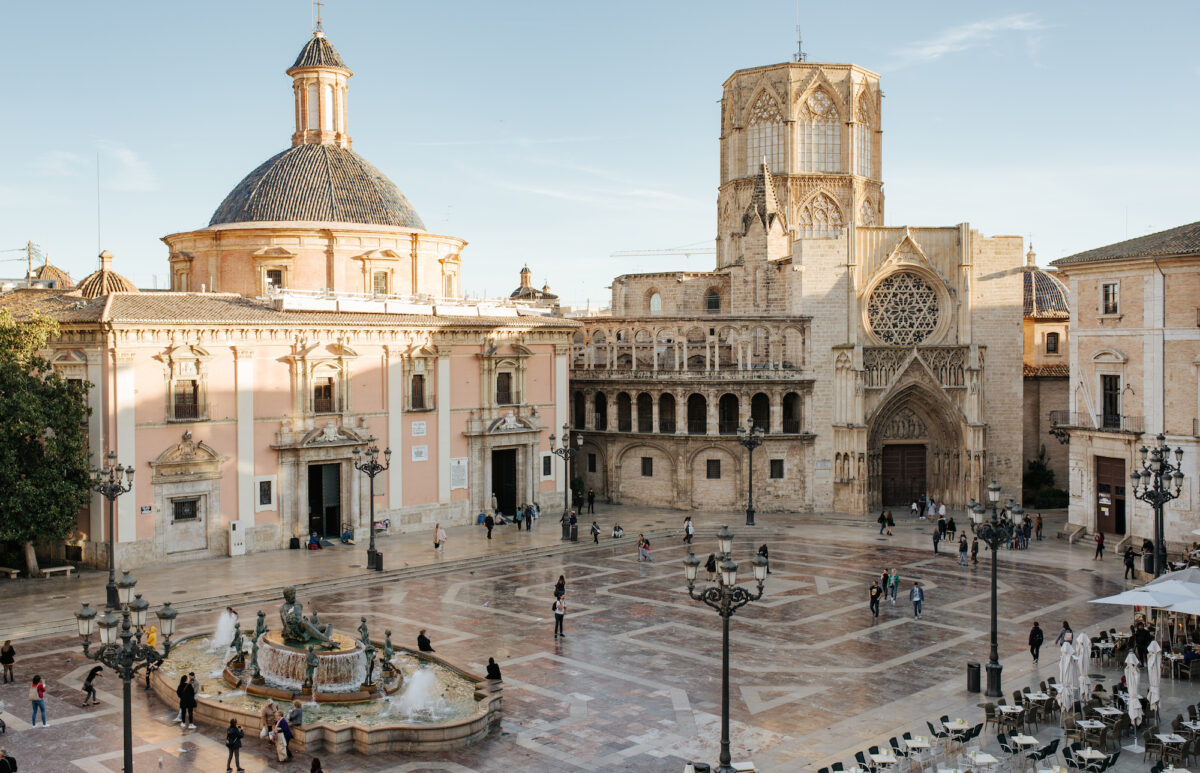 Valencia: History at its Heart, Fire in its Soul

“In 2014, they invited the director of restoration of the Sistine Chapel. He entered here and exclaimed, ‘Why didn’t you tell me you had a Sistine Chapel in Valencia?’” our guide Konstantin, of Discovering Valencia, paused as my wife and I stared up in awe where beams of sunlight, glowing in the incense smoke, lit up a magnificent expanse of frescoes. “When you see the church from outside, you are not thinking to go in.”

True, the 15th-century church of St. Nicholas of Bari and St. Peter Martyr is Gothic in style, so one might expect a more severe interior. Nothing had prepared me for the saints and angels of the Baroque ceiling, which invariably makes one think of Michelangelo’s masterwork. The paintings present scenes of the patron saints’ lives and a few historical figures, including the archbishop who commissioned this upgrade in the 1690s. The brilliant restoration was completed in 2016, and the Sistine Chapel comparison stuck.

Founded in 138 B.C. as Valentia, a Roman military outpost, Valencia is now the capital of a province within an autonomous community of Spain—all three of them named Valencia. From its origins to modern Spain comes a lot of history, including inclusion in the Kingdom of Aragon and five centuries of Moorish rule. So at its heart are some winding narrow streets and many historic structures.

We had booked a room at Only YOU Hotel, a sleek, hip property where check-in takes place at the lobby bar and breakfast is served top-floor with a sunrise view of the skyline all the way to the sea.

Prior to the “Valencian Sistine Chapel,” Konstantin took us to La Lonja de la Seda, known as the Silk Exchange in English, a Gothic trade center completed in 1533 where merchants came to settle contracts in the meeting hall—or spend some time in debtor’s jail on the third floor. Latin phrases on the walls call for ethics from the merchants. The UNESCO World Heritage Site looks like a minor castle with its crenelated parapet and the flag of Valencia flying from its central tower, but the contract hall, with its multi-colored marble floors and twisting columns, the chapel, and the courtyard of orange trees, was all about business.

The walking tour included St. Mary’s Cathedral as well. Set on the site of a previous cathedral and mosque, the cathedral saw work from 1270 into the 17th century, giving it a variety of design elements, although it appears to be primarily Gothic. The Holy Chalice—perhaps the most widely celebrated of the several Holy Grails that have appeared over the centuries—has a dedicated chapel within.

Later, on our own, we tried to find our way back through the curling streets of the historic center, becoming delightfully turned around. After a round of tapas and vermouth at a streetside table, we crossed a small fountain square, stopped in at an artisanal ceramics shop, and peered in a window where a third-generation artisan painstakingly painted designs on traditional hand fans. By the end of the afternoon, we found ourselves under the tower of the church of Santa Catalina right across from an orxateria of the same name, which drew us in with the promise of churros and hot chocolate. But instead, we ordered the local sweet bread, fartons, and glasses of orxata. Pronounced like the horchata of rice milk, this Valencian drink is tigernut milk, a concoction that must be drunk fresh and promises myriad health benefits.

Valencia is the birthplace of paella, and if you’re planning a visit, book a meal at La Barraca de Toni Montoliu, well in advance—as in maybe before you even board your flight. The renowned Spanish masterchef’s countryside restaurant is surrounded by his family farm, and the traditional Valencian paella is done there in a giant pan over an orange-wood fire.

A short walk from our hotel, we took a typical (two-hour long) Spanish lunch at Palace Fesol and enjoyed appetizers, a bottle of local D.O.P. white wine, and a pan of seafood paella. Our server noticed us slowing down and produced a bowl of the best aioli I’ve ever had, swirling it into a large scoop of paella. “Like this,” she said. Sure enough, that was irresistible. We finished the two-hour meal with two desserts and a glass of mistela, an after-dinner sipper made with muscatel grapes and alcohol. By then we were inclined to partake in another Spanish tradition: the siesta.

Each year, Valencia celebrates an event known as Las Fallas (or Falles in Valencian). The fest runs from March 1 to March 19. On a recommendation from Visit Valencia, I visited The Fallas Museum, which is dedicated to what to me seemed to be merely parade floats. But it was much more extraordinary than that. Two floors worth of galleries held a chronological record of the winning floats, with only the central caricatured paper-mâché figure of it preserved. The rest of the winning float, and in fact, all of the other floats for that particular year, were committed to fire at the end of the festival.

The roots of the festival lie in a carpenter tradition. Each spring, they would create fires with the wood that had been used to support their lights during the winter and into these flames might also go worn-out clothing and other personal items that no longer served. The result gave the piles a certain human aspect that evolved into actual figures known today as ninots. Unsurprisingly, these often took on socio-political themes, not unlike some Carnival floats in other cultures, and thus the display at the museum becomes as much a historical timeline as a collection of statues.

Each day of the festival offers a barrage of firecrackers at 2 p.m. in the Plaza del Ayuntamiento (Town Hall Square) and a massive fireworks display is put on at midnight on March 18. However, the finale takes place on March 19: the Cremà, which is the burning of all the floats. It’s hard to imagine destroying these beautiful and often towering creations, the cost of which can reach into the millions of euros. But life, like beauty and like these artworks, is ephemeral. What more fitting way to celebrate?

The Fallas of Valencia is on the UNESCO list of Intangible Cultural Heritage of Humanity. And while a visit to the museum is recommended, you might want to plan your visit so that you can be part of this traditional celebration. But that said, any time is a good time to be in Valencia.

The author was a guest of Visit Valencia and Visit Spain