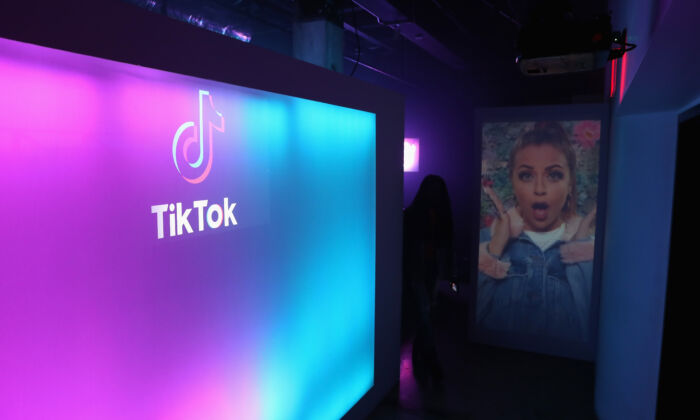 A general view of the atmosphere during the TikTok US launch celebration at NeueHouse Hollywood in Los Angeles, California on August 1, 2018. (Joe Scarnici/Getty Images)
US-China Relations

US Senators Call on Director of National Intelligence to Investigate TikTok, Other Chinese Apps

U.S. Senate Minority Leader Chuck Schumer (D-N.Y.) and Sen. Tom Cotton (R-Ark.) are the latest to sound the alarm on Chinese short-form video app Tiktok, writing to the U.S. director of national intelligence (DNI) to assess the national security risks posed by TikTok and other Chinese applications with a U.S. presence.

Schumer and Cotton sent a letter to acting DNI Joseph Maguire on Oct. 23. The DNI is a U.S. government Cabinet-level official who leads the United States intelligence community.

“With over 110 million downloads in the U.S. alone, TikTok is a potential counterintelligence threat we cannot ignore,” the senators said in the letter, noting that TikTok collects extensive data on users, including “sensitive personal information.”

The senators also pointed out that as a Chinese company, TikTok’s owner, ByteDance, is required to follow Chinese laws. “China’s vague patchwork of intelligence, national security, and cybersecurity laws compel Chinese companies to support and cooperate with intelligence work controlled by the Chinese Communist Party [CCP],” they wrote.

The Peterson Institute for International Economics assessed in a 2019 report that TikTok gathers user data, including location and IP address. “If this information is sent to China, it can be easily accessed by the government and leveraged, say, to make Beijing’s surveillance software better at recognizing Western faces, or at extracting intelligence on Western military activities,” the report stated.

TikTok is highly popular among young military service members, according to the report, who “upload videos of themselves … in uniform and with ID tags in plain sight.” As TikTok collects location data, these servicemembers could have exposed their locations “inside military facilities” to the Chinese regime.

Previously, Sen. Marco Rubio (R-Fla.) sent a letter on Oct. 9 to Treasury Secretary Steven Mnuchin and urged the Committee on Foreign Investment in the United States, an interagency panel administered by the treasury department, to scrutinize ByteDance’s 2017 acquisition of Musical.ly.

ByteDance is the owner of TikTok, and Musical.ly is a Shanghai-headquartered social media platform. ByteDance bought Musica.ly in November 2017 and combined the music app with TikTok in August 2018.

Rubio’s letter also raised concerns about censorship on the app. “The Chinese government’s nefarious efforts to censor information inside free societies around the world cannot be accepted and pose serious long-term challenges to the U.S. and our allies,” Rubio wrote to Mnuchin.

TikTok follows CCP’s censorship rules, though the company claims it doesn’t. Users would not be able to find content about “the recent Hong Kong protests, as well as references to Tiananmen Square, Tibetan and Taiwanese independence, and the treatment of Uyghurs,” the senators wrote in their letter to the DNI.

The senators also warned that “the platform is also a potential target of foreign influence campaigns like those carried out during the 2016 [presidential] election on U.S.-based social media platforms.”

They urged U.S. intelligence agencies to examine the risks posed by TikTok and other China-based platforms.

Tencent, WeChat’s owner, didn’t report how many active users they have in the United States, but announced back in August 2013 that the app had more than 100 million registered users outside of China.

On July 31, Bradley Thayer, a professor of political science at the University of Texas–San Antonio, along with Han Lianchao, vice president of the pro-democracy group Citizen Power Initiatives for China, said in their column published in The Hill that installing WeChat on one’s phone or laptop was equivalent to putting on electronic shackles, as the app engages in censorship and monitoring even for users outside of China.

The Epoch Times conducted tests on WeChat in August and verified that WeChat was filtering information, including texts, pictures, and website links, for users in the United States.

WeChat currently has 1.1 billion active users around the world and is ranked the world’s fifth-most popular social media platform as of July 2019. TikTok has 500 million global users and is ranked No. 9.