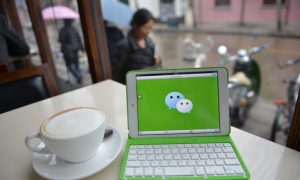 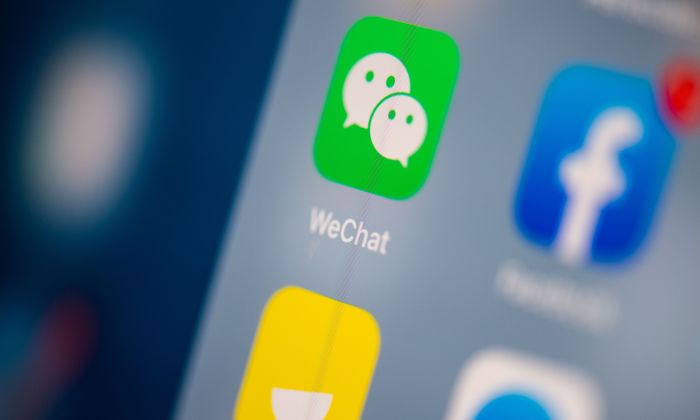 This illustration picture taken on July 24, 2019, in Paris shows the logo of the Chinese instant messaging application WeChat on the screen of a tablet. (Martin Bureau/AFP/Getty Images)
China Human Rights

Censorship on China’s most popular social media app WeChat extends to users outside of China, according to tests conducted by The Epoch Times, highlighting the reach of Chinese censorship overseas.

While WeChat’s tight control of information on its app inside China is well known, it also blocks content for overseas users not normally subject to the regime’s censorship practices.

The app, developed by Chinese tech giant Tencent Holdings Ltd., has more than 1.1 billion monthly active users. It has attracted scrutiny in recent years over its security flaws, lack of privacy protections, and its use as a tool to influence Western elections.

Launched in 2011 as an instant messaging app, WeChat has quickly expanded into a one-stop-shop social media platform. Besides messaging, users can post images or videos on a social feature similar to Facebook’s timeline called “moments,” pay for everyday purchases in China, play games, and use other apps within WeChat.

WeChat cooperated with China’s Ministry of Public Security to create a digital ID system, which rolled out nationwide in January 2018. The electronic ID cards issued by the app, which can be used in lieu of physical state-issued ID cards, are linked to a user’s face and fingerprint.

With the two accounts, the testers shared links of various media outlets’ websites to each other using the app’s personal messaging feature. The receiver would then try to open the links on the device.

When testers tried to send a link to the homepage of the Chinese-language Epoch Times, the receiver would be able to see the message, but couldn’t open the link.

After the receiver clicked on the link, the app would open a page that read: “Visiting the page has been stopped. Based on users’ complaints and Tencent’s secure URL detection, the webpage you are trying to open includes content that violates the law or rules.”

When the testers sent the webpage links to chat groups and posted it to WeChat moment, the result was the same: The links could be sent and posted, but couldn’t be opened by any account—not even by the account that shared the links.

The websites of the Chinese-language BBC and New York Times, in contrast, were found to be blocked on some occasions, but accessible on others. Further, on other occasions, testers found that their webpage could be opened but none of the links on the page were active—they were simply text. It also occurred when links to the homepage of the English-language Epoch Times were sent.

Testers didn’t have any issue sharing and opening links to overseas pro-Beijing news outlets including sinovision.net, singtaousa.com, and worldjournal.com.

After about five hours of testing, during which dozens of links were shared, WeChat shut down both accounts. The app notified the users that the phone numbers had been blocked and been barred from registering with WeChat in the future.

Tencent didn’t respond to a request for comment by The Epoch Times.

In 2018, researchers who analyzed 1.04 million articles posted on 4,000 public accounts covering daily news on the app found that 11,000 were removed by censors.

The most censored topics of 2018, according to the study, included the U.S.–China trade war, the arrest of Huawei’s Chief Financial Officer Meng Wanzhou in Canada, and the controversy surrounding a Chinese scientist behind the world’s first gene-edited babies.

Heng He, a U.S.-based China affairs commentator, told the Chinese-language Epoch Times that the Chinese regime’s propaganda tactics outside of China were two-fold: promoting news favorable to Beijing, and suppressing information that casts the regime in a negative light.

Given that most Chinese living overseas use WeChat to communicate with Chinese friends and relatives, the app is a useful propaganda tool for the regime, Heng said.

“WeChat uses standards set by the Chinese Communist Party to block specific Chinese-language websites in the United States. This proves that it is an agent of the CCP,” Heng said.

A New York-based businessman surnamed Wang, who conducts his business mainly on WeChat, told the Chinese-language Epoch Times that the app doesn’t allow him to share censored information.

“In fact, we only can post things related to food, entertainment, games, and the information that benefit the Chinese regime on WeChat, so the app is full of garbage,” Wang said.

Wang said to ensure his account doesn’t get blocked, he doesn’t share any information relating to the U.S.–China trade dispute or other political issues.